Bestselling US author Jeffrey Masson believes humans can learn a lot from animals. His first book on animals When Elephants Weep sold over one million copies and was followed by another bestseller, Dogs Never Lie About Love.

“In both books, I attempt to show that animals have basically the same emotions we do, especially positive ones, such as love and feelings of friendship,” he says. “In fact, they have more pure and powerful emotions of this kind than humans.”

The world’s leading authority on animals and emotions will speak to second-year UNSW Sociology and Anthropology (SOCA) students next Monday (September 30).

“Since I first wrote about this some 25 years ago, it has now become more or less accepted science: yes indeed, all animals have pretty much all the basic positive emotions,” he says. “The evidence for this keeps growing and very few animal scientists today would dismiss this as anthropomorphism – attributing qualities to animals that they could not possibly possess. It has even been shown that rats laugh when tickled.”The devout vegan says it’s important to know about these emotions because it raises profound ethical questions.

“Do we have the right to subject feeling animals to painful experiments merely because they would benefit humans? Should we use their fur? Should we use them for entertainment – think of dolphins and Orcas in water worlds? And most important of all, should we eat them? You probably know my answers to all these questions.” 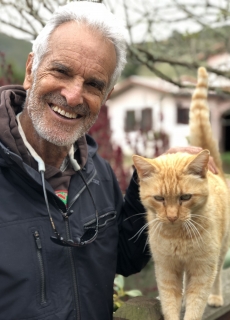 Dr Masson accepted an invitation to speak to the Culture and Emotion class from his friend, Associate Professor Mary Zournazi from the SOCA program at UNSW School of Social Sciences.

“We met last year through my film Dogs of Democracy,” Dr Zournazi says. “Jeff heard about the film from some friends in the US and contacted me to meet and have a chat for the research he was conducting for his book Lost Companions. Since our initial meeting, we’ve become friends, and we bond around our love of animals – especially dogs.”

Dr Masson was a professor of Sanskrit in the US before becoming a Freudian psychoanalyst and then turning to writing about the emotional lives of animals. He now lives in Sydney and has written 30 books, a dozen of which are concerned with animal emotions.

“At this point in our history, it may well be that the only way we can survive is to look to animals to see how it is that for millions of years, they never destroyed their habitat. Whereas we are on the verge of doing so, killing ourselves and possibly all other life on earth. How is that animals do not even have the concepts of ‘enemy’ and ‘hatred’ and ‘warfare’?”

Dr Zournazi says the Culture and Emotion course looks at the experience of emotions in humans and animals.

“It provides a context to understand how emotions shape our understanding of both our individual and social lives,” she says.

Dr Zournazi says the talk is open to anybody who loves animals “and who might be interested in how animals can teach us about what makes us human.”