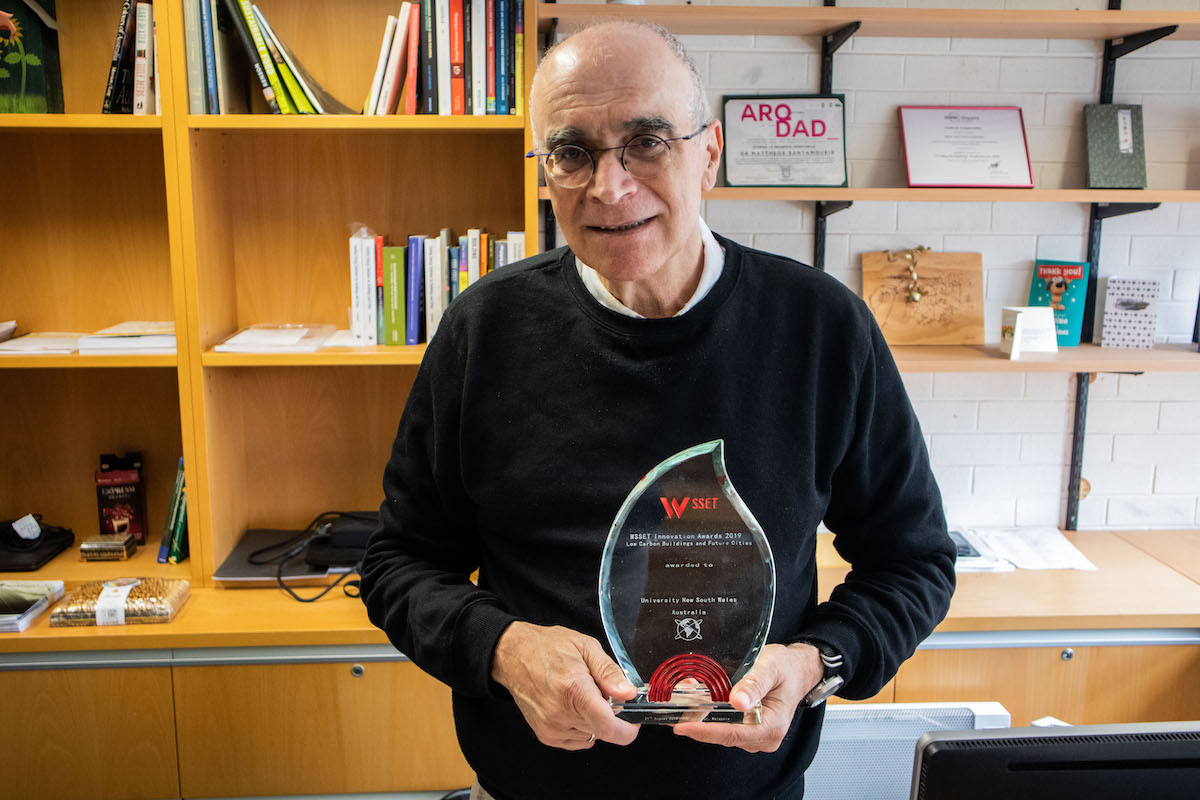 UNSW Scientia Professor Matthaios Santamouris, a leader in cooling the world’s cities, has won the prestigious 2019 World Society of Sustainable Energy Technologies (WSSET) Innovation Award in the Low Carbon Buildings and Future Cities category. The award recognises the heat mitigating materials and technology he and a team of researchers have developed over the last two decades.

WSSET Innovation Awards acknowledge the achievements of private individuals and organisations in new sustainable technologies and encourage the wider application of new developments. The awards are presented in categories including renewable energy systems, sustainable materials, and waste management and water recycling.

“This award is something that is very appreciated,” said UNSW School of Built Environment Professor Santamouris, the Anita Lawrence Chair of High Performance Architecture.

“There are many awards for architects, but not so many for architectural scientists and the existing prizes are very limited. The community is expanding, especially regarding the science of cities and sustainability. It is an honour to be recognised with this prestigious award for building sciences.”

Professor Santamouris has more than 20 years’ experience investigating urban overheating, heat mitigation and urban heat islands, which he describes as the most documented phenomenon of climate change.

The urban heat island effect occurs when an urban or metropolitan area is significantly warmer than surrounding areas due to human activity. The biggest culprits are hard surfaces, dark roofs, areas with no trees for shade and waste heat from energy use. Today, the phenomenon affects more than 500 cities around the world.

Professor Santamouris said the temperatures of cities are rising due to the increased use of heat-absorbing materials such as asphalt roads and concrete for buildings and footpaths. He is currently working on heat mitigation projects in cities across Europe, Japan, Singapore and Malaysia, as well as Parramatta and the largest project of its type in Darwin.

“Cities have a serious problem with overheating. In western Sydney, for example, you may have temperatures that are nine or 10 degrees warmer than the eastern part of the city because of the thermal balance,” Professor Santamouris said. “By using and implementing the heat mitigation technologies we have developed, it is possible to decrease the temperatures of cities by 3 degrees, which reduces morbidity and mortality, and increases the level of comfort for people.”

In addition to the health costs related to overheated cities, there are tremendous energy costs involved to satisfy the demand for cooling solutions like air conditioning. The materials and technologies Professor Santamouris has developed ease the reliance on energy consumption by using smart technologies and simple solutions.

Professor Santamouris employs thermochromic materials such as paint that changes colour with the temperature to keep places cool in the summer and warm in the winter, nanotechnology that gives surfaces a much lower temperature than the ambient temperature, and ultra-reflective photonic materials that absorb less heat.

He is currently working with the City of Parramatta to rehabilitate one of the city’s busiest thoroughfares along Phillip Street. Temperatures in Parramatta routinely soar well above average during the hottest months, resulting in heat waves and urban heat islands. Professor Santamouris said research found the asphalt temperature in some areas reaching 70 degrees Celsius.

The goal is to reduce the temperature by 2 degrees Celsius and improve comfort by 80 per cent using open spaces, additional greenery, misting stations and in the future, cool pavements.