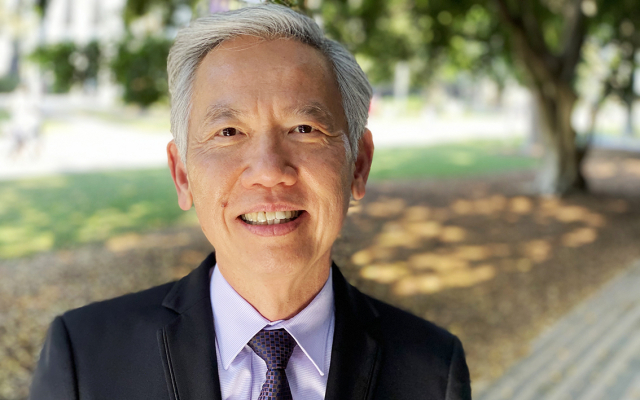 When Chee Mun Chong left UNSW as a young solar energy researcher he held an efficiency record for large-area buried contact solar cells. When he returned to the university as an academic 20 years later, the record still stood.

Professor Chee Mun Chong found himself at the crossroads in the latter half of the 1990s: after a few years building business for Exxon Mobil in Asia, should he accept a promotion to manage Exxon Mobil’s business interests in China from its Hong Kong office?

The job itself was attractive enough, but the problem was a question of timing: the 1997 deadline was fast approaching for Hong Kong to be handed back to China after 99 years of British administration. Many of Professor Chong’s ex-pat friends in Hong Kong were leaving amid fears of disruption to business and possibly, career paths.

“In retrospect, I had one friend who stayed in Hong Kong post-1997,” Professor Chong says.

“He was very clever. He figured out that with ’97 approaching and everyone leaving, there would be an absolute dearth of talent in Hong Kong. It turned out, if you wanted a good career in Hong Kong, that was the time!”

Given the most recent events in Hong Kong, his decision to turn the job down may have turned out to be the right one after all. But any lingering regrets he may have had about knocking back a great career opportunity were soon extinguished after landing what he says is his most fulfilling role to date: overseeing deals between UNSW and the world’s leading solar cell manufacturers to commercialise the University’s advanced hydrogenation technology.

What is advanced hydrogenation?

Simply defined, hydrogenation involves the introduction of hydrogen atoms during manufacture of the solar cell in order to eliminate defects.

Silicon is the most common semiconductor material used in solar cells because of its abundance, being the seventh most common element on earth. But while cheap, one of its drawbacks is that in crystalline form, its atomic structure – with four electrons on its outer shell seeking four more to complete the shell – naturally bonds very snugly with other silicon atoms, making it difficult to dislodge the electrons needed to make into electricity.

To compensate, crystalline silicon is ‘doped’ with boron atoms which, after bonding with oxygen, have a spare, dangling electron that can be dislodged by sunlight and turned into energy. However, other dislodged electrons can sometimes reattach to the boron-oxygen molecule, effectively neutralising it, and so the solar cell ‘misses out’ on this electron being delivered as electricity.

At UNSW’s School of Photovoltaic Renewable Energy Engineering (SPREE), researchers therefore came up with a way to reduce this loss of energy by getting hydrogen atoms to ‘passivate’ the molecule by bonding with it – like filling a hole in the road to ensure the free flowing electrons arrive at their intended destination. Known as advanced hydrogenation, passivation of the silicon wafers in solar cells is performed at the manufacture stage, ensuring they leave the factory with a boost in their operating efficiency and long-term stability.

In his first stint at UNSW as a student in the 1980s and early ’90s, Professor Chong achieved a record 20.6% efficiency with large-area buried contact solar cells when the rest of the world was struggling to get 17%.

“And that 20.6% record was still standing when I came back to UNSW 20 years later,” Professor Chong says. “I had PhD students who didn’t know my history telling me how much they wanted to break the 20% efficiency record. I just smiled, I didn’t want to discourage them.”

(That 20% efficiency record for a large area commercial cell was eventually broken in late 2011 by a UNSW team working in collaboration with Suntech Power.)

Arriving back at UNSW in 2009 after spending two decades as an executive in the energy industry of Asia, Professor Chong reunited with his SPREE colleagues with a new directive. This time around his focus would be outward looking, to enhance UNSW’s relationship with industry partners now keen to implement the advanced hydrogenation technology into their manufacturing practices.

“I like to think that my 20 years spent in the energy industry in Asia, making decisions involving millions, and sometimes 10s of millions of dollars in the oil and gas industry, that all of it prepared me for this time which is when solar energy is really taking off,” he says.

“Where this advanced hydrogenation comes into play is with our equipment manufacturer industry partners who collaborate with us to make machines that apply these advanced hydrogenation techniques to solar cells. And these machines are then bought by our cell manufacturer partners to make solar panels that have higher efficiency and lower degradation than those that haven’t received the passivation treatment.”

Looking ahead, Professor Chong says there is no reason to think that even more efficiency can’t be squeezed out of solar panels.

“I’m confident that we’ll get that down to 1%, and I think we can even get to half a per cent –  time will tell.

“But for the moment, there’s still plenty of research to be done and luckily, our industrial partners are as keen for it as we are.”