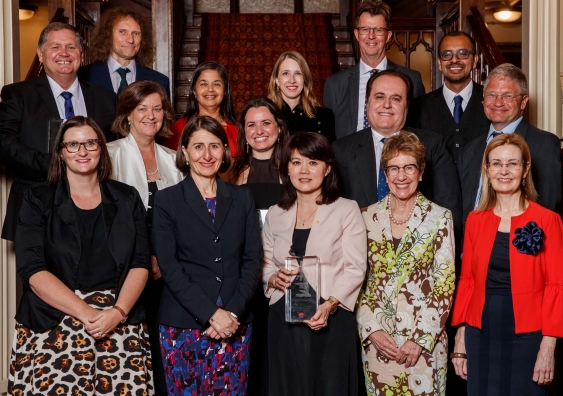 UNSW researchers have won half of the awards announced at the NSW Premier’s Prizes for Science & Engineering on Tuesday night at Government House in Sydney, including the top prize for NSW Scientist of the Year.

Premier Gladys Berejiklian presented Scientia Professor Rose Amal AC with the 2019 NSW Scientist of the Year award and $60,000 prize money. She was honoured for her world-leading research in the fields of fine particle technology, photocatalysis and functional nanomaterials, which have profound implications for solar and chemical energy conversion applications such as treating water, purifying the air and generating renewable hydrogen economically and sustainably.

The annual prizes, awarded in ten categories, are held by the NSW Government to celebrate the achievements of the state’s finest scientists, engineers and educators for cutting-edge work that has led to economic, environmental, health, social or technological benefits for the state.

“When I first came to Australia from Indonesia more than 35 years ago, I never imagined that I would ever receive this award,” Professor Amal said.

“Scientific research contributes significantly to many everyday aspects of society and it has been a joy to be able to help improve our quality of life. I dedicate the award to my mentors and members of my research group who have worked tirelessly to unearth new scientific knowledge to improve our planet and those who live on it, now and into the future.”

Ms Berejiklian said that the Prizes were an opportunity to celebrate the extraordinary contribution that NSW scientists and engineers make to our everyday lives.

“The NSW Government will continue to support our state’s finest scientists and engineers, to ensure that their innovative thinking is translated into important solutions to our state’s ever-changing challenges,” Ms Berejiklian said.

“This year’s entry contained the highest number of female nominations ever. Gratifyingly, this has translated into an equal number of female and male prize recipients, while also revealing a rich depth of talent, from our two exciting Early Career Researchers, right through to some of the most respected researchers in the state, including Scientist of the Year Professor Rose Amal. I offer my sincere congratulations to all our winners and thanks them for the outstanding and continuing contribution they make to science, engineering and education in NSW,” Professor Durrant-Whyte said.

Scientia Professor Rose Amal AC, from the School of Chemical Engineering at UNSW Engineering, won 2019 NSW Scientist of the Year.

Professor Amal is a chemical engineer and the leader of the Particles and Catalysis Research Group at UNSW. 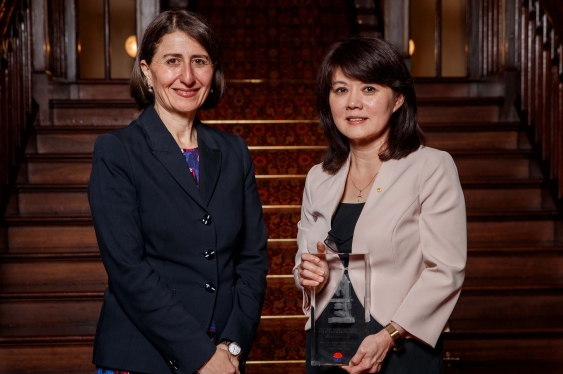 Her group is at the forefront of fundamental particle and catalysis research and development in Australia, in areas which directly impact people's lives.

“We are researching catalysts for efficient energy conversion, such as hydrogen production from water, and chemical production from CO2. These reactions are important as they address the changing energy mix for a sustainable future and can reduce energy costs for consumers,” Professor Amal said.

“It is more likely these catalysts will be implemented if they harness multiple energy sources which address the cost issues. For example, we can combine both light and heat energy to activate a catalyst.”

Beyond fundamental development in these areas, Professor Amal is translating this research into real-world applications to benefit the community.

Professor Amal’s group has recently received ARENA funding for a project that aims to produce hydrogen as an energy carrier using a highly efficient and low-cost photovoltaic electrolysis (PVE) system by harvesting the full spectrum of sunlight.

Professor David Keith, from the School of Biological, Earth and Environmental Sciences at UNSW Science, won the award for Excellence in Biological Sciences.

As a leading Australian ecosystem scientist, Professor Keith is widely recognised for contributions to biodiversity risk assessment and new approaches to ecosystem management. He holds an appointment as Senior Principal Research Scientist at the NSW Department of Planning, Industry and Environment and serves on the National Threatened Species Scientific Committee and the Steering Committee of the International Union for the Conservation of Nature (IUCN) Red List of Ecosystems program. 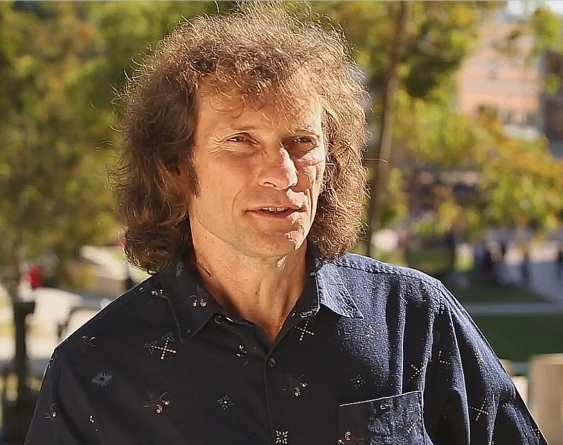 His current research aims to produce the first global overview of risks to the world's ecosystems, dependent plants and animals, and the services they provide to sustain societies and economies. The results will help pinpoint ecosystems at greatest risk and reveal the most effective ways to mitigate the underlying causes of the threats.

“It is wonderful to be recognised for work that is being used for public good to solve environmental problems, stem continuing erosion of human wellbeing and sustain nature itself,” Professor Keith said.

At a local level, Professor Keith part of a group researching the risks to Sydney's water catchments posed by underground mining. This work will help connect on-ground solutions to global-scale problems.

“The next decade is critical to the future of Australian ecosystems, many of which face collapse because of prolonged and accelerating overexploitation in a changing climate. Scientists have a responsibility to apply their critical thinking skills to design and test creative and practical solutions to this sustainability crisis,” Professor Keith said.

Professor Clark is a pioneer in the field of epigenetics – the research of the additional layer of instructions on DNA that organises and regulates gene activity. 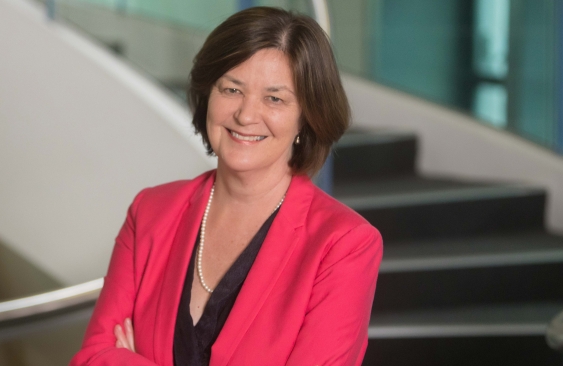 Professor Clark, who has led the Epigenetics Research lab at the Garvan Institute of Medical Research since 2004, has helped revolutionise the understanding of how epigenetics influences early development and diseases such as cancer, and has made seminal contributions to a field whose implications are only just beginning to be realised.

“We’re still only at the tip of the iceberg in understanding how DNA is normally read and interpreted during early development,” Professor Clark said. “Recently we discovered that epigenetic patterns are altered in many diseases, including cancer, where they can change gene regulation to result in cancer cells growing out of control.”

“It may well take another lifetime before we fully understand epigenetic regulation. The legacy I want to leave is to share my passion for epigenetics research and to see the amazing individuals that I’ve mentored to continue making new in roads in gene regulation in cancer and other diseases.”

Dr Merlot was recognised for her work developing safer and more effective drugs and strategies to combat some of the deadliest cancers, including pancreatic and brain cancer, and prevent their spread and adaptation to current treatments. 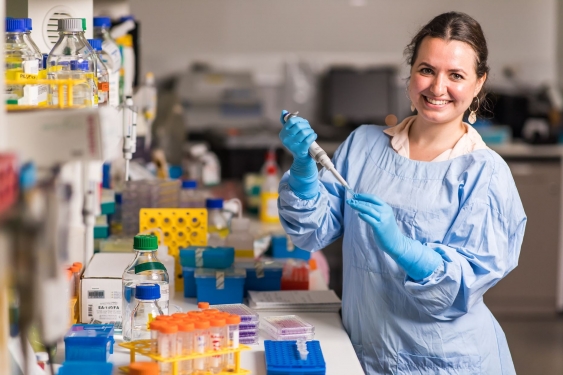 Dr Merlot’s work focuses on understanding a part of the cancer cell known as the endoplasmic reticulum, which is hyperactive and altered in cancer cells when compared to healthy cells. Her research into novel anti-cancer metal-binding agents aided the entrance of a new agent into a Phase I clinical trial in Australia.

“I am looking at ways to stop this over activity and identify key targets to develop novel therapeutic approaches,” Dr Merlot said.

“I am also focusing on creating nanoparticles, about one-tenth of the thickness of a human hair strand, that can act as a drug delivery system. These nanoparticles prevent damage to normal tissue and the side effects associated with this damage.

“There are plenty of roadblocks in research that can be overcome through collaborations. Collaborations keep research cutting edge, encourage creativity and are likely to ensure that the research translates to direct benefits to patients.”

Dr Neeraj Sharma, from the School of Chemistry at UNSW Science, won the Early Career Researcher of the Year (Physical Sciences).

Dr Sharma is a global leader in the use of neutron and X-ray scattering methods to study materials for next-generation batteries. 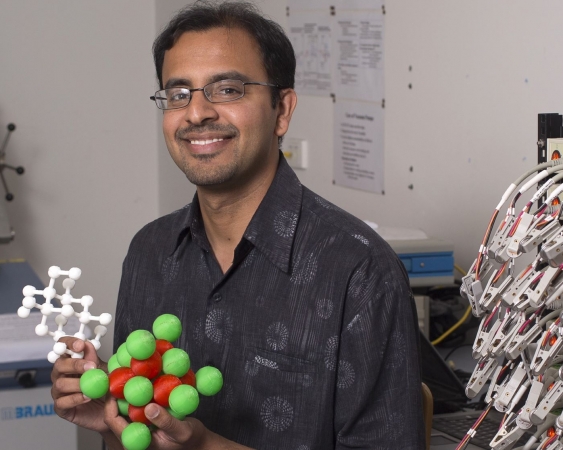 By focusing on electrochemical reactions in batteries, Dr Sharma aims to better understand how electrode composition, and structure at the atomic level, influence performance.

“To develop the next generation of technologies we need better performance, at a lower environmental cost,” Dr Sharma said.

“We can enable and enhance the uptake of electric vehicles, ensure batteries are recycled leaving minimal environmental impact, and transition away from fossil fuels for energy generation and transportation. There is significant opportunity to shape how we live into the future," Dr Sharma said.

“As researchers we are all working in our niche and there is potential, sometimes it is obvious as in batteries and at other times it is more subtle - but research really does change the world.”