From ENGG1000 to The Warman Competition: My Journey in Design! 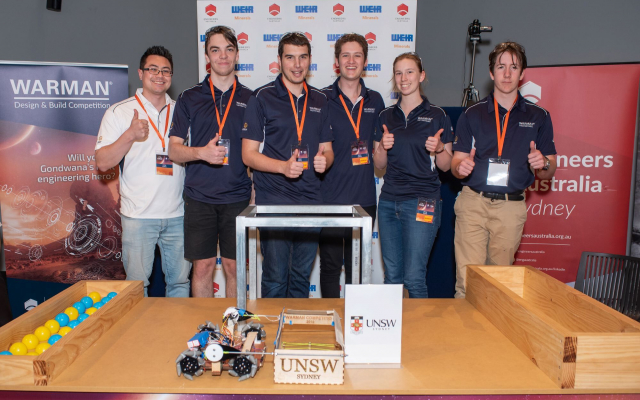 Having started University at the beginning of this year, I could never have guessed how much I could learn and accomplish!

At the beginning of term 1 I joined a team for project ARDET (Autonomous Recover and Deliver Emergency Transport) as part of ENGG1000 course; which introduces students to engineering design through project-based team activity. Project ARDET required us to design and build a working robot to collect and deposit 10 balls by traversing over various obstacles.

It was challenging to work closely with other students I had only just met from a variety of fields of engineering. We had to adapt as a team to better utilise everyone’s individual skills and break down the overall task to develop various solutions to overcome each challenge presented throughout the project. We named our team; Team Ibis, in honour of the bin chicken which can be seen all over campus.

The two best ENGG1000 teams were given 14 weeks to engineer another robot to instead collect 20 balls in the fastest time possible! The winner would go on to Represent UNSW in the 32nd Warman Design and Build competition. The last time UNSW had won was in 2007 and it was time that UNSW had a chance to take the Warman Cup back!

During the internal comp we had 3 runs in total. In our first run we only managed to collect 2 balls but in our second run we managed to collect all of them all. For our final run we decided to come out swinging and remove some of fixes to the movement of the robot. This gamble payed off and we finished the course faster than before. We won the internal competition against Team Overkill; the other UNSW team, and we proceeded to the International final, where 18 team from Universities from all over the South Pacific would participate!

Up until the competition we had spent 4 months working continuously perfecting our design. A week out from the final we were feeling confident in design and our robot had both speed and accuracy. However, on the day of the final, as many teams quickly learnt, real world testing creates problems that no one could plan for. Our motors were drawing too much power and so the Arduino “the brain of the robot” would constantly reset itself. Alongside this one of our motors broke the Saturday night before the competition and the servo which secured the balls in broke in. We improvised quickly to adapt, lucky we received a power bank from a goodies bag which could power our Arduino and we had a spare motor to replace our servo.

Unfortunately, in the end, we did not get a place on the podium, but I had gained so much from participating in ENGG1000 and the Warman Competition! I gained strong friendships, I learnt how to better lead and organise our time developing reasonable goals for the team to achieve each week.

Looking back over my first year at UNSW I’m shocked by all the opportunities that were presented to me and excited for all the possibilities to go on and do greater things. I hope to continue competing and representing UNSW with the dream to join a Student Project like SunSwift for 2020.

I would like to thank Daniel Eggler and my team for their support through ENGG1000 and the Warman Competition.

Click Here to see the results from the Warman Competition!

Get involved with Student Projects as a part of the ChallENG Program here!