Industrial Design graduates Frédérique Sunstrum and Alexander Ghent have placed in the top 20 globally in the annual James Dyson Award. 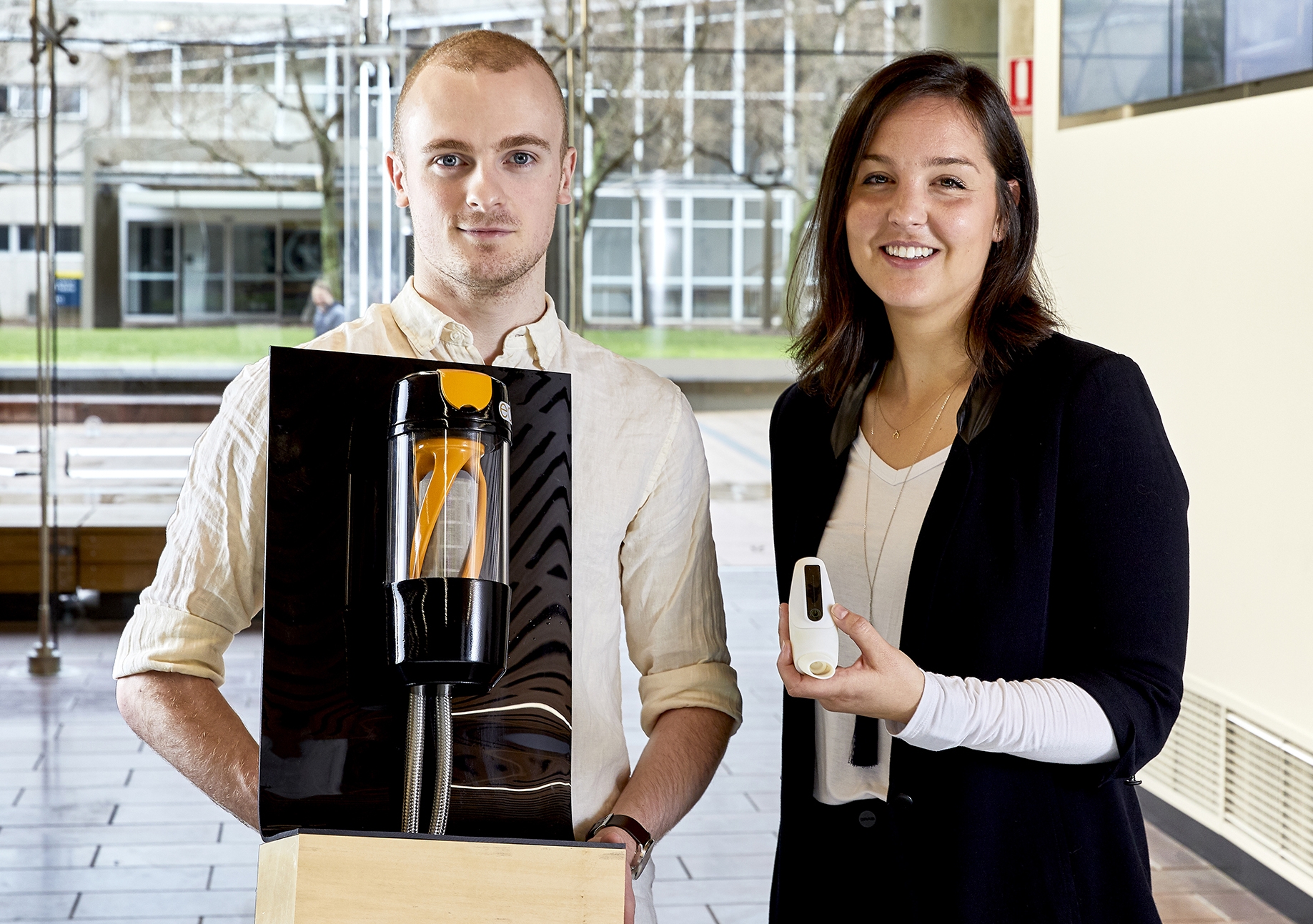 Student inventors from UNSW Built Environment have been named national runners-up in the Australian leg of the James Dyson Award, an international competition that encourages aspiring engineers and designers to solve the problems of tomorrow.

Frédérique Sunstrum and Alexander Ghent, both recent graduates of the industrial design program, were commended for their projects tackling medical challenges and environmental issues that affect millions of people around the globe. Their projects are now in the running for a $55,000 cash prize.

A solution for people with diabetes

As an extension of her final year project, Frédérique developed Continuity – a non-invasive diabetic device that monitors glucose levels and delivers insulin without the need for painful and time-consuming needles and strips that are currently on the market. Continuity received a Gold Award in the Next Gen category of the 2019 Good Design Awards, Australia’s peak international design endorsement program.

While diabetes affects 1 in 10 people around the world, it was a personal connection that inspired Frédérique to find a solution to the demand for non-invasive diabetic devices. Frédérique remembers watching her grandmother struggle with the old procedure of pricking a finger, putting a drop of blood on a test strip and placing the test strip in a glucometer to read the blood sugar levels.

“When I was younger, my grandmother would disappear and I never knew where she would go,” Frédérique said. “One day I followed her, and she was in her room checking her glucose and insulin. She gave me a go to show me what it felt like. I remember it hurt and took a long time to test. That led me to think about ways that were less painful and weren’t as time-consuming.”

Using the latest technologies, Continuity comprises an earring-like device that applies continuous 24/7 glucose monitoring and a handheld oral inhaler to deliver pre-dosed insulin that is absorbed into the inner lining of the cheeks.

One side of the device transmits radio-frequency waves through the earlobe, clearing the skin layers, generating a clear picture of the blood cells for the sensor to read the glucose levels on the other side of the earlobe. The device then vibrates to alert users of change in glucose levels and sends alerts to their phone to initiate action. The insulin inhaler effectively delivers aerosolized insulin safely and in real time. Both devices communicate through low-energy Bluetooth to an app that sends information to healthcare professionals as well as designated family members.

“It means the world in my industry to be recognized by arguably one of the best designers in the world, especially for a project that I’m so passionate about,” said Frédérique, who is now a first-year PhD student in psychology and industrial design at UNSW.

A better barrier against microplastics

Joining Frédérique in the runners-up circle was Alexander Ghent, who graduated from the industrial design program in May. Alexander designed Eddy, a retrofittable filter system for washing machines designed to stop microplastic pollution from synthetic fibres such as polyester and nylon reaching the oceans.

“Despite their small size, microplastics pose a colossal threat to the health of our oceans,” Alexander said. “A 6kg wash can release on average 700,000 microplastic fibres down the drain. That’s one wash from one household and there are millions of households and washing machines across the globe.”

Initially, Alexander set his sights on developing a tool to help researchers collect microplastic samples from the ocean and analyse the data. But after consulting with marine scientists and other experts, Alexander shifted the angle of his research to focus on a proactive device to stop microplastics from entering the marine environment in the first place.

“The angle that I wanted to attack the problem from was, ‘if these products were made compulsory tomorrow, are they going to be suitable for everyone?’ Current products on the market are difficult to clean, they’re prone to clogging and they’re difficult to install,” Alexander said. “I wanted to make microplastic prevention as easy as possible for every consumer.”

Creating a device that is retrofittable to the millions of washing machines in use around the world was also a requirement for the recent graduate, who is now a junior industrial designer at Electrolux.

“Some of my early concepts were for a washing machine that had a microfibre filter in it,” Alexander said. “But that would have been more environmentally irresponsible to replace every existing washing machine with one that stops plastics.”

Both Alexander and Frédérique praised UNSW academics from across disciplines who served as advisors throughout the process. Alexander recognised Dr Mark Brown, a marine scientist from the School of Biological, Earth and Environmental Sciences (BEES) and tutor Elise Loueille for their mentorship. Meanwhile, Frédérique acknowledged Professor of Industrial Design Oya Demirbilek, who encouraged Frédérique to “go for it”.

“The support I got was amazing. My advisors really pushed me to think outside of the box,” Alexander said. “I started with an initial idea and they would encourage me to look at the barriers that were holding the design back, what wasn’t working and how it could be better. Over time, the design developed into what it is today.”

Alexander and Frédérique join Australian winner Ryan Tiley from RMIT University in the international stage of the competition. Ryan’s invention improving mobility for manual wheelchair users on sand and other difficult terrain was selected as the Australian winner. International entries from 27 nations will be whittled down to a shortlist of 20, which were announced on 17 October.  The overall international winner will be announced in November and receive a cash prize of $55,000.