Firestorms and flaming tornadoes: How bushfires create their own ferocious weather systems

Large, intense bushfires can pump so much heat into the atmosphere they form their own thunderstorm system. And that can make the weather on the ground even more dangerously unpredictable. 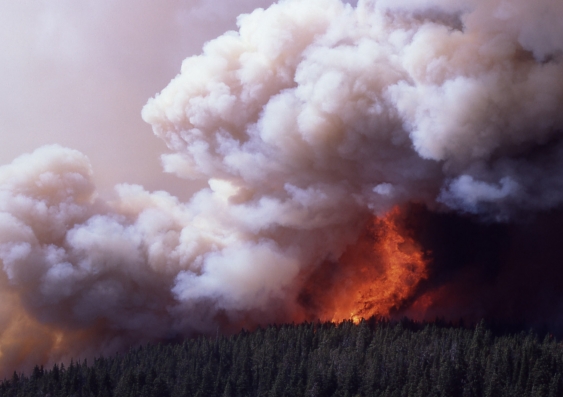 This is not just a figure of speech or a general warning about the unpredictability of intense fires. Bushfires genuinely can create their own weather systems: a phenomenon known variously as firestorms, pyroclouds or, in meteorology-speak, pyrocumulonimbus.

The occurrence of firestorms is increasing in Australia; there have been more than 50 in the period 2001-18. During a six-week period earlier this year, 18 confirmed pyrocumulonimbus formed, mainly over the Victorian High Country. 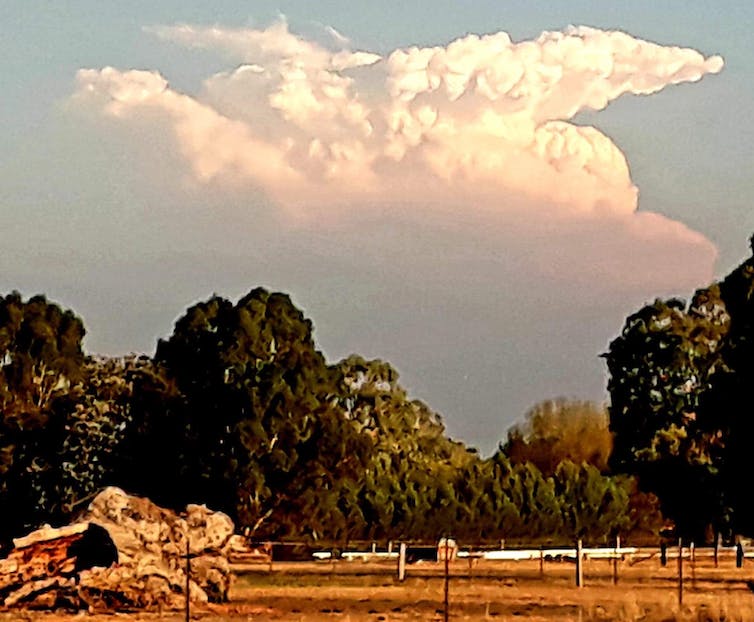 A pyrocumulonimbus cloud generated by a bushfire in Licola,Victoria, on March 2, 2019. Elliot Leventhal, Author provided

Its not clear whether the current bushfires will spawn any firestorms. But with the frequency of extreme fires set to increase due to hotter and drier conditions, it’s worth taking a closer look at how firestorms happen, and what effects they produce.

What is a firestorm?

The term “firestorm” is a contraction of “fire thunderstorm”. In simple terms, they are thunderstorms generated by the heat from a bushfire.

In stark contrast to typical bushfires, which are relatively easy to predict and are driven by the prevailing wind, firestorms tend to form above unusually large and intense fires.

If a fire encompasses a large enough area (called “deep flaming”), the upward movement of hot air can cause the fire to interact with the atmosphere above it, potentially forming a pyrocloud. This consists of smoke and ash in the smoke plume, and water vapour in the cloud above.

If the conditions are not too severe, the fire may produce a cloud called a pyrocumulus, which is simply a cloud that forms over the fire. These are typically benign and do not affect conditions on the ground.

But if the fire is particularly large or intense, or if the atmosphere above it is unstable, this process can give birth to a pyrocumulonimbus – and that is an entirely more malevolent beast.

What effects do firestorms produce?

A pyrocumulonibus cloud is much like a normal thunderstorm that forms on a hot summer’s day. The crucial difference here is that this upward movement is caused by the heat from the fire, rather than simply heat radiating from the ground.

Conventional thunderclouds and pyrocumulonimbus share similar characteristics. Both form an anvil-shaped cloud that extends high into the troposphere (the lower 10-15km of the atmosphere) and may even reach into the stratosphere beyond. 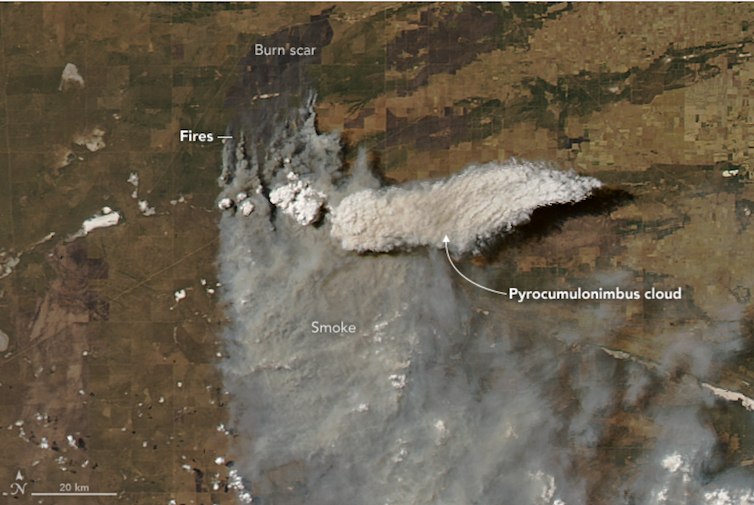 The weather underneath these clouds can be fierce. As the cloud forms, the circulating air creates strong winds with dangerous, erratic “downbursts” – vertical blasts of air that hit the ground and scatter in all directions.

In the case of a pyrocumulonimbus, these downbursts have the added effect of bringing dry air down to the surface beneath the fire. The swirling winds can also carry embers over huge distances. Ember attack has been identified as the main cause of property loss in bushfires, and the unpredictable downbursts make it impossible to determine which direction the wind will blow across the ground. The wind direction may suddenly change, catching people off guard.

Firestorms also produce dry lightning, potentially sparking new fires, which may then merge or coalesce into a larger flaming zone.

In rare cases, a firestorm can even morph into a “fire tornado”. This is formed from the rotating winds in the convective column of a pyrocumulonimbus. They are attached to the firestorm and can therefore lift off the ground.

This happened during the infamous January 2003 Canberra bushfires, when a pyrotornado tore a path near Mount Arawang in the suburb of Kambah.

Understandably, firestorms are the most dangerous and unpredictable manifestations of a bushfire, and are impossible to suppress or control. As such, it is vital to evacuate these areas early, to avoid sending fire personnel into extremely dangerous areas.

The challenge is to identify the triggers that cause fires to develop into firestorms. Our research at UNSW, in collaboration with fire agencies, has made considerable progress in identifying these factors. They include “eruptive fire behaviour”, where instead of a steady rate of fire spread, once a fire interacts with a slope, the plume may attach to the ground and rapidly accelerate up the hill.

Another process, called “vorticity-driven lateral spread”, has also been recognised as a good indicator of potential fire blow-up. This occurs when a fire spreads laterally along a ridge line instead of following the direction of the wind.

Although further refinement is still needed, this kind of knowledge could greatly improve decision-making processes on when and where to deploy on-ground fire crews, and when to evacuate before the situation turns deadly.