The Reserve Bank of Australia says it's prepared to ease monetary policy further if needed to stimulate the economy. But is the policy working when interests rates are so low?

In its quarterly statement on monetary policy, released today, the Reserve Bank of Australia declared its preparedness to “ease monetary policy further if needed”.

This suggests the bank still thinks monetary policy – in this case lowering interest rates to stimulate the economy – could help “support sustainable growth in the economy, full employment and the achievement of the medium-term inflation target”.

But in the wake of the bank last month lowering the official interest rate to a record low and the current somewhat sad state of the Australian economy, many commentators have speculated that monetary policy doesn’t work any more.

There are a number of variants of the “monetary policy doesn’t work” argument. The most basic is that the Reserve Bank has this year cut rates from 1.50% to 0.75% without any improvement to the Australian economy.

This is a textbook example of one of the classic logic fallacies known as “post hoc ergo propter hoc” (from the Latin, meaning “after this, therefore because of this”).

Put simply, it assumes the rate cuts have had no effect and doesn’t account for the possibility things might have been worse had there been no cuts.

Things might have been even worse. We’ll never know.

It also ignores what might have happened if the RBA had cut sooner. Again, we can’t know for sure. It is possible, though, to make an educated guess.

When to cut rates 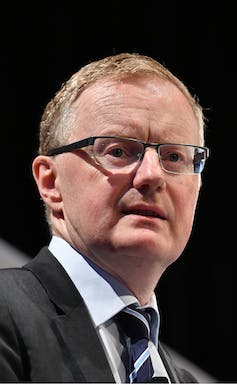 Had Reserve Bank governor Philip Lowe acted, say, 18 months earlier to cut rates, he would have signalled that Gross Domestic Product growth was indeed lower than desired, that the sustainable rate of unemployment was more like 4.5% than 5%, and, most importantly, that he understood the need to act decisively.

That would have sent a powerful signal.

It would also have ameliorated the huge decline in housing credit that pushed down housing prices in Sydney and Melbourne by double digits.

That, in turn, would have prevented some of the weakening in the balance sheets of the big four banks that has occurred (witness this annual general meeting season).

All of this would have pumped more liquidity into the economy and put households in a much stronger position, likely leading to stronger consumer spending than we have seen.

One gripe both the Reserve Bank governor Philip Lowe and federal treasurer Josh Frydenberg have had with the banks is their failure to fully pass through the RBA cuts.

It is true there is a problem with banks not being able to cut deposit rates below zero, and as a result having less scope to cut mortgage rates, which are majority funded from deposits.

But there are, of course, other ways monetary policy can work. The leading example is quantitative easing (QE).

This is where the central bank pushes down long-term interest rates by buying government and corporate bonds. At the same time this expands the money supply, thereby adding some upward inflationary pressure.

There is little reason to think such measures wouldn’t work.

The power of free money

Perhaps paradoxically, the closer interest rates get to zero the more powerful those rates may end up being.

To put it bluntly, if someone shoves a pile of money into your hand and asks almost nothing in return, you’re likely to use it. In fact, you would be pretty silly not to.

Suppose your mortgage rate really goes to zero – as has happened in Europe.

Such spending provides an economic boost.

The effect is all the more pronounced if people expect interest rates to be low for a long period of time. Aggressive cutting coupled with quantitative easing – which lowers long-term rates – signal just that.

Just because monetary policy still has some effect at near-zero rates doesn’t mean we should pin all of our economic hopes to it.

A near consensus of economists have argued repeatedly for the use of more aggressive fiscal policy – including more infrastructure spending and more tax cuts.

Indeed, Philip Lowe has raised eyebrows by speaking so forthrightly on this issue. That doesn’t make him wrong, though.

There is little doubt the Reserve Bank should have acted much earlier to cut official interest rates. There is also a very good chance it will need to begin to use other measures such as quantitative easing in the relatively near future.

All of that says the Australian economy, like most advanced economies around the world, is in bad shape.

But it doesn’t mean monetary policy has completely run out of puff.