OPINION: The timeless appeal of an ocean pool – turns out it's a good investment, too 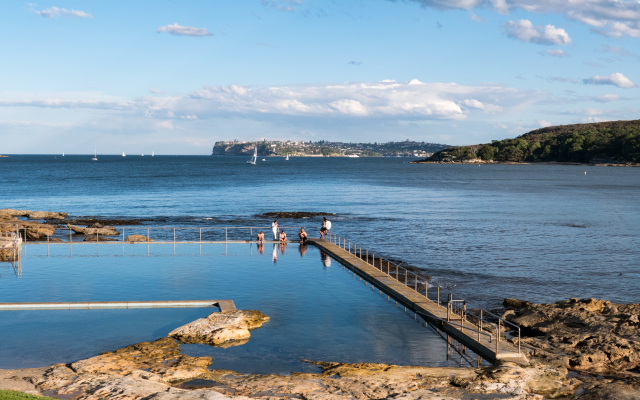 The timeless appeal of an ocean pool – turns out it's a good investment, too 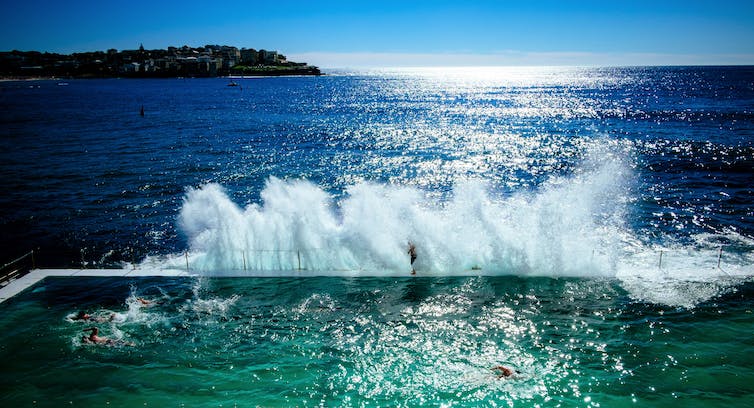 Depending on definitions, the coast of New South Wales, Australia, has about 70 ocean pools, with most located between Newcastle and Wollongong. South Africa has a comparable number, but the rest of the world has only a handful.

Why are ocean pools not more widespread? It isn’t the cost – our research suggests the public benefits of NSW ocean pools greatly outweigh the investment in building and maintaining them. And these pools do hold a special place in the hearts of the communities that use them.

Geographically they are outliers of the built environment poised at the threshold of our nation’s boundary. Anchored to our iconic coastline, they facilitate intimate encounters with the landscape and reflect its importance in our national psyche. 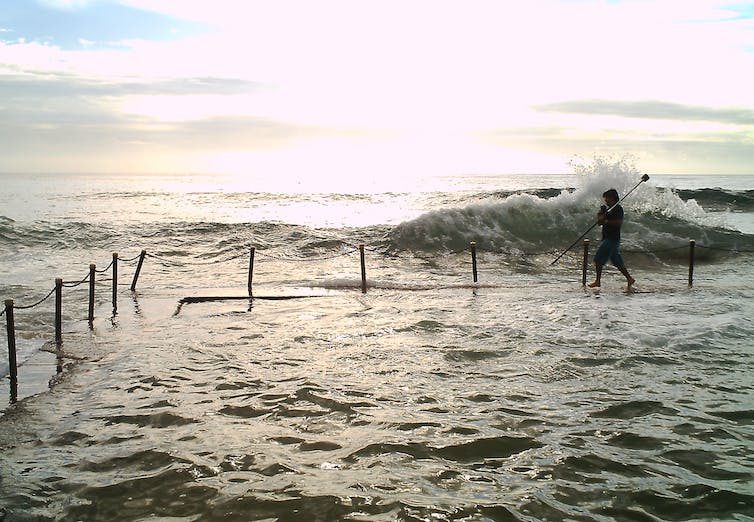 Ocean pools like this one at Newport on Sydney’s Northern Beaches are ‘outliers of the built environment’. Ian Coghlan/WRL UNSW, Author provided

Ocean pools were not the first structures built on the Australian coast. There is a prolific network of Aboriginal fish traps around Australia, with many existing structures dating back thousands of years. Any coastal structures more than 6,000 years old now lie under the sea, as global sea levels have risen 120 metres from 21,000 years ago to 6,000 years ago.

The Bogey Hole in Newcastle is usually claimed to be the first post-European-settlement ocean pool. Convicts built it in 1819. 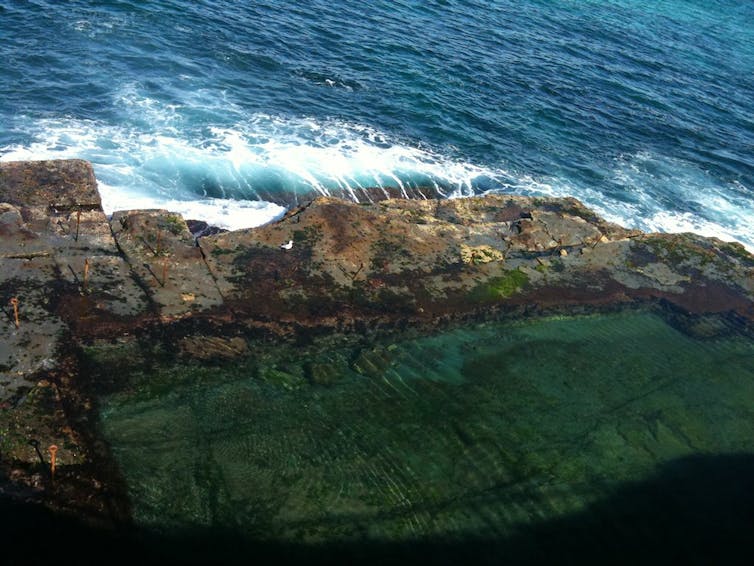 Convicts built the Bogey Hole, a pool carved out of the rock shelf, at Newcastle in 1819. Carol/Flickr, CC BY

Most of the first ocean pools involved local residents or surf lifesavers excavating suitable sections of rock shelves and enhancing them with concrete, with many further iterations until arriving at their present form.

The earliest ocean pools in Sydney’s eastern suburbs date back to the 1880s. Many of the 15 ocean pools on Sydney’s northern beaches were constructed or upgraded as job-creation projects during the 1930s Great Depression. Many Sydney beaches have an ocean pool at each end – some even have more than one. 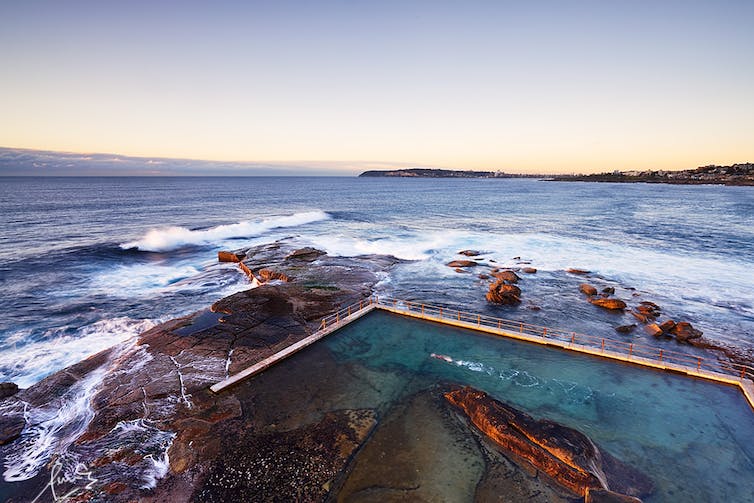 Sydney’s Curl Curl Beach has ocean pools at its northern (above) and southern (below) ends. Sacha Fernandez/Flickr, CC BY-NC-ND 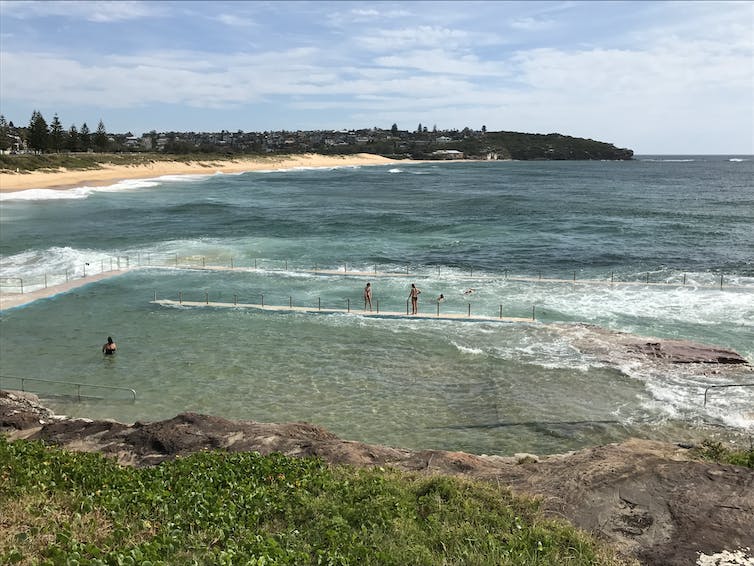 Why does NSW have so many?

The prevalence of ocean pools in NSW arose from a confluence of many factors – geology, climate, culture and economics.

The southern two-thirds of the NSW coast generally consists of short to medium-length sandy beaches, nestled between rocky headlands. Where those headlands are sandstone, there is an ideal balance between a material that can be fairly easily excavated, yet is stable over human time scales. These headlands have allowed pools to be sited on a stable foundation where they don’t alter the shape of the surrounding beaches or fill with too much sand. 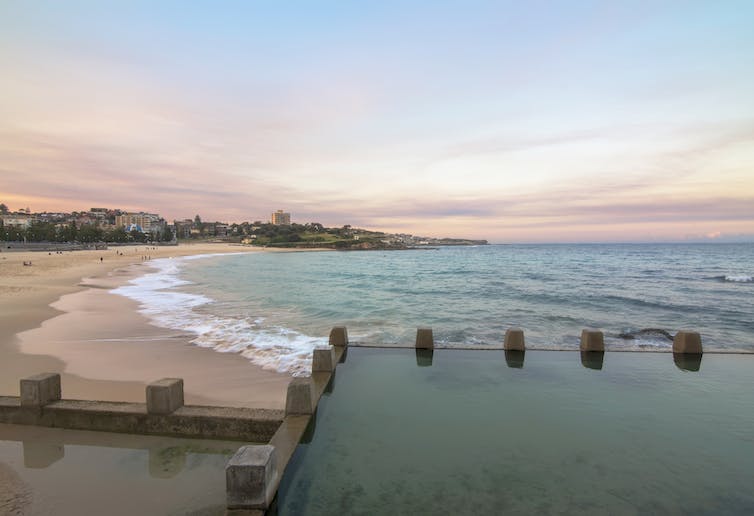 The view from an ocean pool is a big part of its appeal. This one’s at Coogee in southeastern Sydney. Lenny K Photography/Flickr, CC BY

Mild to hot air temperatures and tolerable to pleasant water temperatures – fed by the East Australian (“Nemo”) Current – are conducive to swimming, bathing and surfing.

Beach, ocean, swimming and surfing cultures developed in the early 1900s. Despite its pleasures, the ocean can be a dangerous place. Many people drowned in the early days of surf bathing and drownings on unpatrolled beaches continue to this day.

Ocean pools offer the pleasure of saltwater bathing by the beach, free from sharks, large waves and rips. In his poem The Ocean Baths, Les Murray described the experience:

I am not in the sea but the sea’s television. 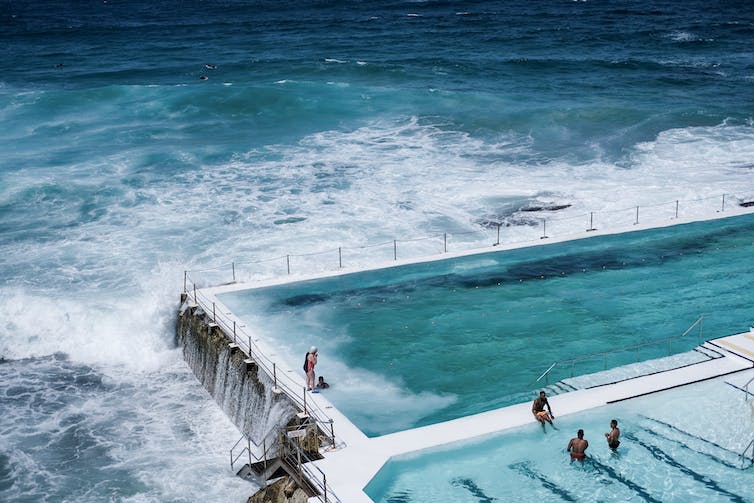 Read more: From segregation to celebration: the public pool in Australian culture

However, almost all ocean pools have dangerous conditions at times. The Water Research Laboratory at UNSW Sydney has recently applied contemporary coastal engineering techniques for estimating wave overtopping to ocean pools. This work has reconciled the theory with the expert opinions of lifeguards and surf lifesavers for a range of pools.

Population centres near the coast, economic prosperity, along with job-creation projects during downturns also drove the construction of ocean pools.

Improved sewage disposal schemes for Sydney in the early 1990s, as well as Newcastle and Wollongong, vastly improved water quality on the beaches, further increasing the attraction of ocean pools and coastal living.

What makes a good ocean pool?

We have polled many users of ocean pools and their opinions are fairly uniform. The best ocean pools have three elements: 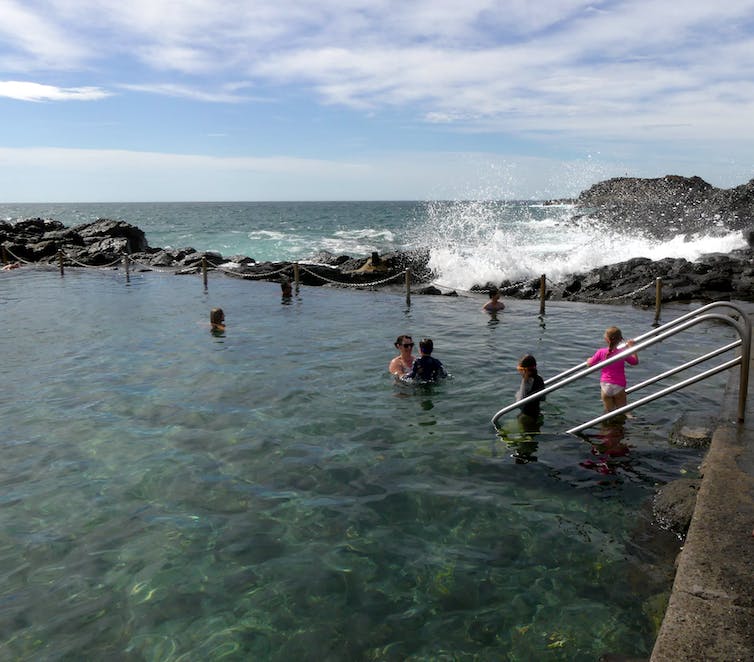 The pool at Kiama, on the NSW South Coast, is popular with young families. geoff dude/Flickr, CC BY-NC-ND

For many users, ocean pools complement other ocean activities, rather than replace them. For example, surf lifesavers or surfers often train in them when the ocean is too flat or too dangerous.

Waves washing into pools make for spectacular photos. These can enhance the sense of wildness, the connection with nature, and flush the pool with clean seawater. But waves can also make a pool dangerous and fill the pool with sand, seaweed and sometimes boulders. So a balance is needed. 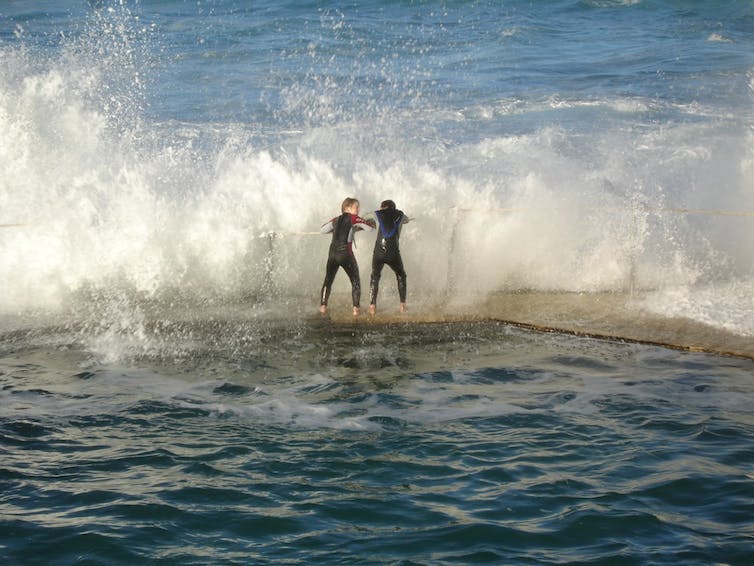 These boys are enjoying the exposure to the elements at Bronte Beach, but it can make ocean pools dangerous at times. Patrick Crowley/Flickr, CC BY-NC-ND

The potential costs of maintenance (cleaning and repairs) have been cited in opposition to new ocean pools. We have surveyed the asset managers for many ocean pools and found annual maintenance costs range from about A$10,000 to A$140,000, with a typical amount of A$80,000. 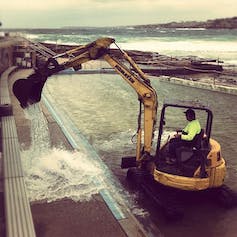 The aggressive location (the “wild edge”) means most pools are refurbished at intervals of 10 to 20 years. The budgets for this work range from A$200,000 to A$1.5 million.

Pool upgrades have allowed the walls of most pools to be raised over time. This has generally outpaced recent sea level rise, but accelerating rises will require serious redesign or abandonment of many pools. Some may join the ranks of existing “ghost” pools, such as those surrounding the present Dee Why ocean pool (Isa Wye Rockpool) or the headland between Bilgola and Newport. A keen eye can spot these on Google Earth.

Improvements in pump technology and economic prosperity have meant many ocean pools now use pumps to maintain water quality, rather than relying only on wave overtopping. This allows for safer pools.

Thus, if physically suitable and environmentally acceptable sites can be found, the economic payback on investment in an ocean pool is rapid. The people of NSW have always loved their ocean pools, so these findings only confirm their status as highly valued community assets.