Caves are easily forgotten when fire rips through the bush, but despite their robustness the long-term impact of frequent, unprecedented fire seasons presents a new challenge for subsurface geology. 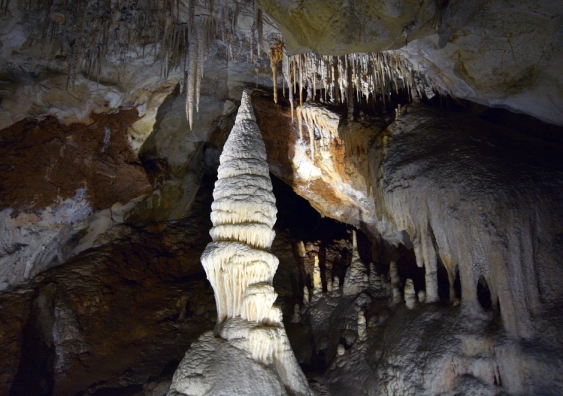 Famous caves at tourist hotspots survived the brunt of the Australian bushfire crisis this summer, but the unprecedented nature of the fires presents a new uncertainty for these unique underground ecosystems, according to a UNSW Sydney geologist.

The bushfires affected many rare karst landforms in south-eastern Australia, including popular tourist attractions such as the Jenolan, Wombeyan and Buchan caves.

UNSW Professor Andy Baker, part of a team which was the first to research the effect of fire on caves and karst, said this was a crucial area to study because of the landforms’ unique geodiversity and values. The fires impacted several research sites where Prof Baker and his collaborators are studying the effects of fire on caves.

“Think of the Marble Arch at Jenolan, Victoria Arch at Wombeyan or Mount Sebastopol in the Macleay Karst Arc. Sebastopol, for example, is a distinctive mountain with significant indigenous values,” Prof Baker said.

“Caves are important refugia and habitat, such as bat roosts which serve as maternity or hibernation sites. But what happens to the bat populations when the ecosystem outside is burnt? Where do they go? Can they survive? We don’t know.

“We can also find evidence of past fires through stalagmites – mineral deposits which rise from the cave floor – so, while fires destroy what’s on the surface, the more protected subsurface is a good place to look for historical climate information and to put today’s fires into context.”

Stalagmites are the counterpart of stalactites, which grow down from the ceiling of a cave.

Prof Baker said that in the next 12 months, he expected the aftermath of the fires to flush nutrients to the subsurface, change cave hydrology and slow down the karstification process (when limestone is exposed to carbonic acid in soil and dissolves, it creates distinctive landforms – karst).

“Some hydrological changes may be permanent or long lasting, and the slow-down in karstification can last several years,” he said.

“These effects decrease the weaker the fire and deeper the cave.” 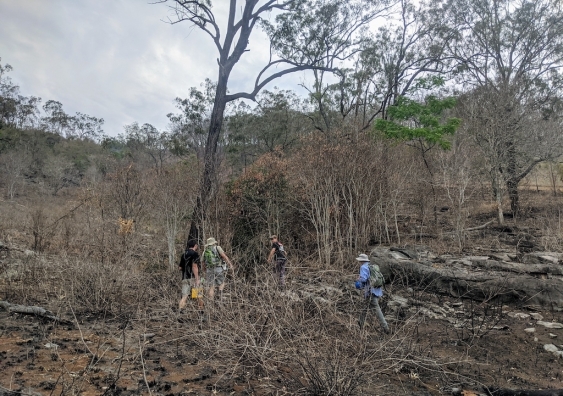 Prof Baker said the fires disproportionately affected NSW’s karst because it was concentrated in national parks in the main firegrounds, such as the Greater Blue Mountains World Heritage Area.

“Many areas have burnt before, but this is the first time we have seen so many sites burn at the same time, in the same fire season – so, the spatial coverage is one of the reasons why these bushfires are unprecedented,” he said.

“The fires are also unprecedented because of the rainforest areas that burnt, and these areas contain karst. For example, most of the Macleay karst up north is subtropical or temperate rainforest and some of the fires burnt into the subtropical rainforest.

“Macleay is where I cave with a group that includes volunteer firefighters and citizen scientists. I have never seen such extensive fire there before.

“It’s probably the first time fire has affected the rainforest in a very long time because rainforest, unlike other forests and trees, has not evolved and adapted to fire – these trees shouldn’t catch fire – so, it might not grow back and that's a major concern.”

Prof Baker has worked with Kempsey Speleological Society to monitor the climate and hydrology of some caves in the temperate and subtropical rainforest of the Macleay region since 2014.

“A number of these caves were burnt by the large Carrai-Carrai East fires between October and December last year,” he said.

“We explored one of these caves in November, in what was one of the first research trips to investigate the impact of fire on karst.

“So, our long-term monitoring dataset is now a rare and valuable baseline to investigate the effects of fire on cave climate and hydrology.” 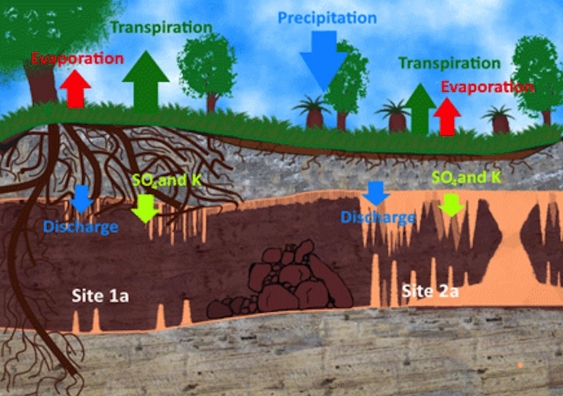 How cave dripwater chemistry works when there is no fire. Image: UNSW Science

Yanchep National Park in Western Australia was one of the coastal karst areas devastated by fire before Christmas.

Prof Baker visited this month to research the impact of the 2019 fire compared to a blaze in 2005 at the same location.

The karst area was the subject of the researchers’ initial work on the effects of fire on caves and karst and implications for fire management, which began in 2013.

The monitoring, which continued until 2011, examined the hydrology and water chemistry of water percolating from the surface to the cave. 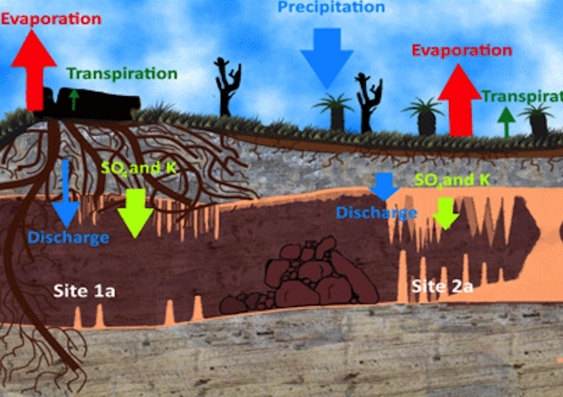 Prof Baker said the researchers, led by then UNSW Honours student Gurinder Nagra, published the results in 2016 and it became the first ever study on the effects of fire on caves.

“The research showed that the fire killed large trees, and so the surface was no longer shaded. This made the surface hotter, increased evaporation and therefore, the cave became drier,” he said.

“The dead trees left ash deposits on the surface and the soluble components of the ash were carried via water to the cave. The most abundant soluble ash materials are nutrients and therefore, fire caused the export of nutrients to the subsurface.

“What’s more, the fires decreased the amount of limestone dissolved, thus slowing down the growth of stalagmites and stalactites in the cave.”

“Annual growth layers – like tree rings – are one way of dating stalagmites but they only appear where you have a strong annual climate,” he said.

“We can count back the years in the chemistry of the stalagmites and if we can count every single year, then we know exactly when fires occurred – which can be quite interesting.” 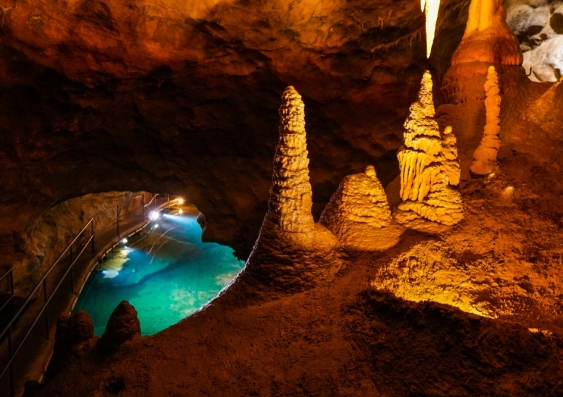 Prof Baker is reviewing the data he collected at Yanchep and looks forward to further research, but he said the long-term impact of fire on caves and karst – particularly, if unprecedented fires become more frequent – was unknown.

“Fire is a natural process – so it's something that’s always happened. But if these fires are unprecedented because of the spatial scale of the country that's burnt, and the fires are occurring simultaneously and becoming more frequent, then that becomes something the caves have not seen before,” he said.

“If more regular nutrient input – the dissolved ash – flows into the subsurface systems, the hydrology may change more, and the underground ecosystem may not be able to cope with receiving nutrients on this scale; but we don’t know.

“In the long-term, there might be permanent changes, for example, a famous stalagmite in a tourist cave which people remember because it always drips water might stop dripping because the conduit is blocked, or maybe a formation that was growing quickly starts to slow down in a few years because the trees have died on the surface.

“And, if overlying forests are intensely burnt, the slowing of karst processes could last many years – until the forest has recovered.” 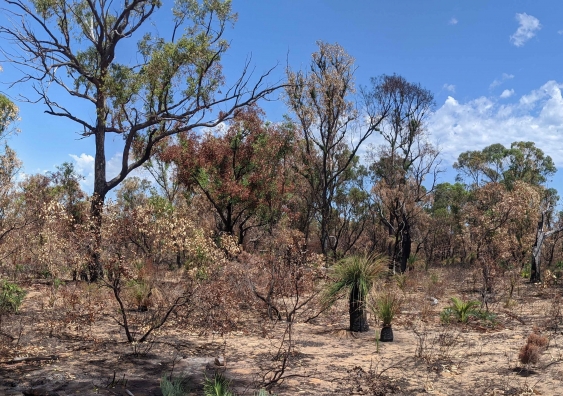