If you don't eat meat but still wear leather, here are a few facts to chew on

Leather isn't just a by-product of the meat industry, and raises serious moral questions for anyone who cares about animal rights.

The numbers of vegans in Australia is on the rise – for many, ruling animal products out of their diet is a relatively straightforward decision. But deciding whether to eschew leather products can be more challenging.

For non-meat eaters who do buy leather, the rationale is usually something like this: if meat is being produced anyway, and it generates a handy by-product such as leather, why not use it rather than waste it?

But there is evidence leather is driving, or at least supporting, the profitability of animal harvesting in some cases. This raises serious moral questions for anyone who cares about animals but still buys leather products.

Kangaroo leather: a case in point

I’m a social policy expert who specialises in animal welfare legislation and ethics. I have also been vegan for about 20 years, mostly out of a moral opposition to factory farming.

Between 2001 and 2004 I worked for the World League for Protection of Animals, which was part of a global campaign against the use of kangaroo leather in sports shoes.

Proponents of kangaroo harvesting argue it helps control numbers and the animals are killed humanely.

But kangaroos are shot at night, from a distance, and their heads are small. This means they can not always be killed humanely with a single shot to the brain. According to the national code of practice, once a mother has been shot, joeys should be killed by decapitation or a blow to the head.

The sale of kangaroo leather boosts the value of the animal and has long been considered the backbone of the industry. The leather is sold at a premium for use in leather clothing and footballs.

The meat, meanwhile, is often used in Australia as pet food or sold at low prices to export markets. 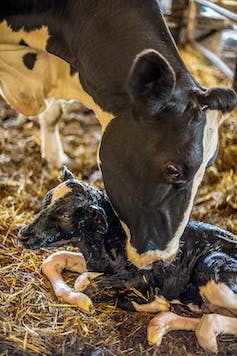 Luxurious calfskin comes from newborn calves, and sometimes even from calf fetuses. Shutterstock

In the beef industry, all byproducts add to the overall value of the animal, and hides comprise the biggest share.

And as has been reported, luxuriously soft calfskin is not necessarily a byproduct of the beef industry – it can come from newborn calves or even calf fetuses.

These guidelines don’t always stop the abuse of animals at slaughterhouses. However overseas, the laws can be even more lax.

China has almost no laws preventing animal cruelty, and investigations have revealed dogs being slaughtered and exported to the United States as traditional leather.

To Hindus in India, cows are considered sacred. But an estimated 1.5 million cows a year are smuggled into neighbouring Bangladesh to be slaughtered, often in rudimentary conditions.

However it should be noted that some academics say the leather industry can benefit some animal species. Their research shows that using exotic animals such as crocodiles, lizards and snakes for their skins gives those species a financial value. This drives local efforts to conserve habitat and prevents the animals from being harvested to extinction. 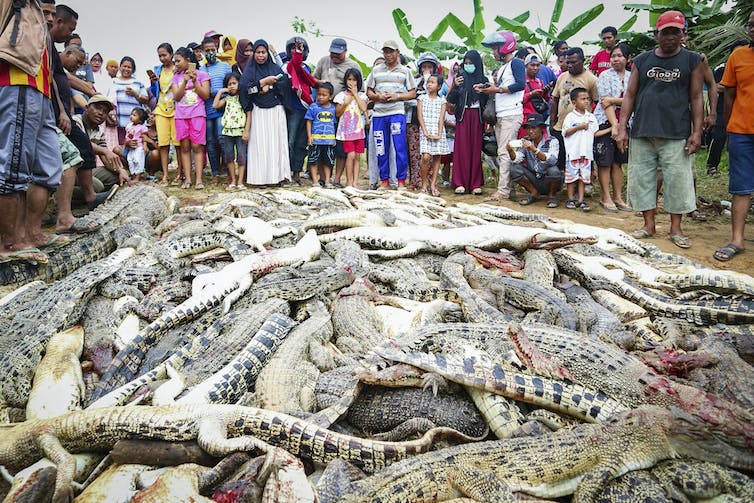 Indonesians gather after a crocodile killing spree in 2018. Some researchers say the animal hide trade can help conserve a species. EPA

Leather production – and its negative side effects – is concentrated in developing countries, which raises a new lot of ethical questions.

Turning the skin of an animal into leather is chemically-intensive and polluting.

For example in Hazaribagh, a leather producing region in Bangladesh, untreated waste from leather tanneries reportedly runs through open canals while inside the tanneries the work is dangerous and child labor is common.

The Higg Materials Sustainability Index, measures the environmental sustainability of materials used in garment production. In 2017, cow leather received the worst ranking of any material.

Is faux leather the answer?

The market has responded to some people’s aversion to leather. Vegan fashionista Stella McCartney uses “vegetarian leather” which is actually recycled polyester. She claims this “creates 24 times less of an environmental impact”.

Among participants at the Copenhagen Fashion Summit, a leading business event promoting sustainable fashion, it seems to be an article of faith that faux, synthetic or lab-produced leather is better for the environment.

But of course, the production of faux leather uses more energy than simply using the shoes and bags already in our wardrobes.

If you really love wearing leather but have animal welfare concerns, you might buy it second-hand. I’ve not gone down that path, because I believe wearing any leather normalises the practice.

There are signs public attitudes to leather are changing. In the United States for example, consumers are eating more beef but leather demand has recently dropped – a change attributed to synthetic alternatives and changing fashion tastes.

Ultimately, the decision whether to wear leather is a personal one. But before you buy your next leather product, do your research and consider whether your purchase might contribute to the animal welfare problem.