Why drought-busting rain depends on the tropical oceans

The absence of climate drivers – specifically, the Indian Ocean Dipole and La Niña – explains why Australia has gone so long without heavy rains. 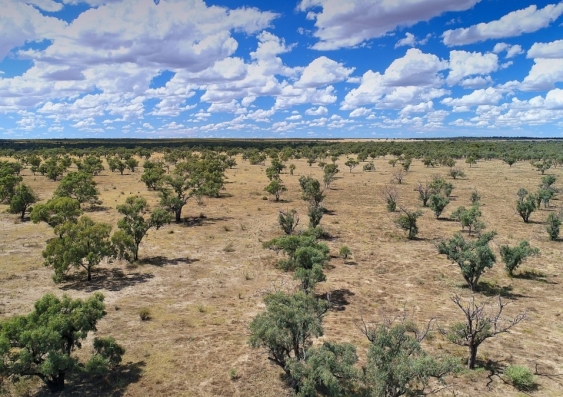 Recent helpful rains dampened fire grounds and gave many farmers a reason to cheer. But much of southeast Australia remains in severe drought.

Australia is no stranger to drought, but the current one stands out when looking at rainfall records over the past 120 years. This drought has been marked by three consecutive extremely dry winters in the Murray-Darling basin, which rank in the driest 10% of winters since 1900.

Despite recent rainfall the southeast of Australia remains in the grip of a multi-year drought. Bureau of Meteorology

So what’s going on?

There has been much discussion on whether human-caused climate change is to blame. Our new study explores Australian droughts through a different lens.

Rather than focusing on what’s causing the dry conditions, we investigated why it’s been such a long time since we had widespread drought-breaking rain. And it’s got a lot to do with how the temperature varies in the Pacific and Indian Ocean.

Our findings suggest that while climate change does contribute to drought, blame can predominately be pointed at the absence of the Pacific Ocean’s La Niña and the negative Indian Ocean Dipole – climate drivers responsible for bringing wetter weather.

The lesser known cousin of El Niño and La Niña across the Indian Ocean is called the Indian Ocean Dipole. This refers to the difference in ocean temperature between the eastern and western sides of the Indian Ocean. It modulates winter and springtime rainfall in southeastern Australia. 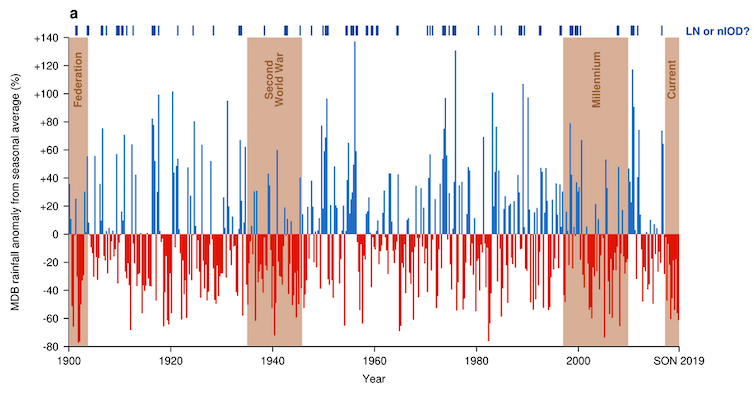 What does it mean for the drought?

When the drought started to take hold in 2017 and 2018, we didn’t experience an El Niño or strongly positive Indian Ocean Dipole event. These are two dry-weather conditions we might expect to see at the start of a drought.

Rather, conditions in the Pacific and Indian Oceans were near neutral, with little to suggest a drought would develop.

So why are we in severe, prolonged drought?

The problem is we haven’t had either a La Niña or a negative Indian Ocean Dipole event since winter 2016. Our study shows the lack of these events helps explain why eastern Australia is in drought.

What about climate change?

While climate drivers are predominately causing this drought, climate change also contributes, though more work is needed to understand what role it specifically plays.

Drought is more complicated and multidimensional than simply “not much rain for a long time”. It can be measured with a raft of metrics beyond rainfall patterns, including metrics that look at humidity levels and evaporation rates.

What we do know is that climate change can exacerbate some of these metrics, which, in turn, can affect drought.

Unfortunately, regional-scale projections from climate models aren’t perfect and we can’t be sure how the ocean patterns that increase the chances of drought-breaking rains will change under global warming. What is clear is there’s a risk they will change, and strongly affect our rainfall.

Putting the drought in context

Long periods when a La Niña or a negative Indian Ocean Dipole event were absent characterised Australia’s past droughts. This includes two periods of more than three years that brought us the Second World War drought and the Millennium drought.

The longer the time without a La Niña or negative Indian Ocean Dipole event, the more likely the Murray-Darling Basin is in drought.

In the above graph, the longer each line continues before stopping, the longer the time since a La Niña or negative Indian Ocean Dipole event occurred. The lower the lines travel, the less rainfall was received in the Murray Darling basin during this period. This lets us compare the current drought to previous droughts.

During the current drought (black line) we see how the rainfall deficit continues for several years, almost identically to how the Millennium drought played out.

But then the deficit increases strongly in late 2019, when we had a strongly positive Indian Ocean Dipole.

So when will this drought break?

This is a hard question to answer. While recent rains have been helpful, we’ve developed a long-term rainfall deficit in the Murray-Darling Basin and elsewhere that will be hard to recover from without either a La Niña or negative Indian Ocean Dipole event.

The most recent seasonal forecasts don’t predict either a negative Indian Ocean Dipole or La Niña event forming in the next three months. However, accurate forecasts are difficult at this time of year as we approach the “autumn predictability barrier”.

This means, for the coming months, the drought probably won’t break. After that, it’s anyone’s guess. We can only hope conditions improve.