'Pandemic drones': useful for enforcing social distancing, or for creating a police state?

While 'good drones' have been valuable in this pandemic, using drones to embed new systems of surveillance could be a dangerous and slippery slope.

People in Western Australia may soon see more than birds in the sky, as the state’s police force has announced plans to deploy drones to enforce social distancing. The drones will visit parks, beaches and cafe strips, ensuring people comply with the most recent round of gathering rules.

As COVID-19 restrictions tighten around the world, governments are harnessing the potential of drones. From delivering medical supplies, to helping keep people indoors – drones can do a lot in a pandemic.

Since the outbreak began, China has used drones to deliver medical supplies and food, disinfect villages, and even provide lighting to build a hospital in Wuhan in nine days. Drone medical deliveries have cut transit times, reduced the strain on health personnel and enabled contactless handovers, reducing the risk of infection.

It’s clear drones are helping combat COVID-19, as governments use them to control and monitor.

But these measures may be difficult to rollback once the pandemic passes. And safeguards will be needed to prevent unwanted surveillance in the future.

With cities on lockdown, drones have shown uncanny images of emptied urban landscapes from Wuhan and metros across the globe.

Social distancing has inspired some quirky uses by individuals, including walking the dog and asking for a date.

But the main game has been about control. China is using drones to enforce quarantine rules and deter gatherings that violate social distancing rules.

One viral video showed a drone scolding an elderly woman for not wearing a mask. In some cases, traffic police and municipal officials used drones fitted with speakers to

Flying at high altitudes, drones can help police and other officials monitor large areas to identify those violating restrictions. Similar tactics are being used in Madrid and Nice, with talk of deployment in many other places.

A defence for the ‘good drone’?

There are huge advantages in sending drones into disaster zones such as bushfires, or remote landscapes for search and rescue. Pilots can safely stream crucial vision from a drone’s optical and thermal cameras.

But while “good drones” can be valuable in disaster, they have been criticised for giving drone warfare an ethical veneer by association with humanitarian work. Some have even argued that using drones at all risks tainting relief work, because militaries have played a major role in developing drone technologies that are also responsible for humanitarian tragedies.

Like all technologies, the question with drones should be about how they are used. For instance, inspecting the breached nuclear reactor at Fukushima with drones is sensible. But embedding systems of control that can be turned against civilians is its own disaster in the making.

With high definition and infrared images streamed to command stations, China’s drones may be able to use facial recognition to identify specific individuals using its Social Credit System, and fine them for indiscretions.

This level of social control may be appealing in a pandemic that could cost millions of lives. But it could also have chilling effects on social and political life.

Surveillance tools typically work best for social control when people know they are being watched. Even in liberal societies, people might think twice about joining climate or racial justice protests if they know they’ll be recorded by a drone overhead. 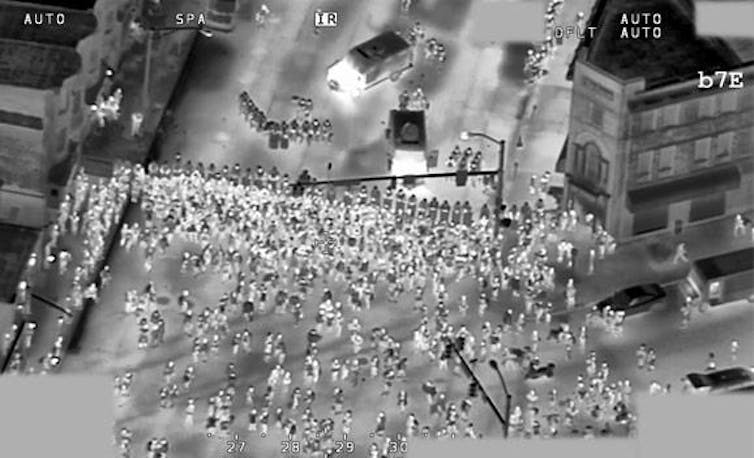 Feeling like you’re constantly being watched can can create a kind of atmospheric anxiety, particularly for marginalised groups that are already closely monitored because of their religion or welfare status.

Putting more drones in the sky raises concerns about trust, privacy, data protection and ownership. In a crisis, those questions are often ignored. This was clear after 9/11, when the world learnt the lessons of surveillance systems and draconian national security laws.

The impact would hit home

Police in the west are already deploying drones for various purposes, including at sporting events in Australia. Our defence force is buying Reaper MQ-9B drones because they are cleared for use in civilian airspace.

We might be fine with delivery drones in Canberra, or disaster drones ferrying urgent medical supplies, but how would we feel if they were indistinguishable from drones piloted by police, the military or private security companies?

A team at the University of South Australia is currently designing a “pandemic” drone to detect virus symptoms such as fever and coughing from a distance. Valuable as that is now, this tool could easily be used to intrusively manage the public’s health after the crisis is over.

It can be difficult to see the long term impacts of choices made in an emergency. But now is the best time for policymakers to set limits on how drones an be used in public space.

They need to write sunset clauses into new laws so that surveillance and control systems are rolled back once the pandemic eases, and create accountability mechanisms to ensure oversight.