Spatial distancing rules for health workers may be insufficient: review

Current advice for COVID-19 health workers is based on the assumption that droplets bearing the virus travel no further than 2 metres and do not remain in the air. The body of published evidence suggests otherwise. 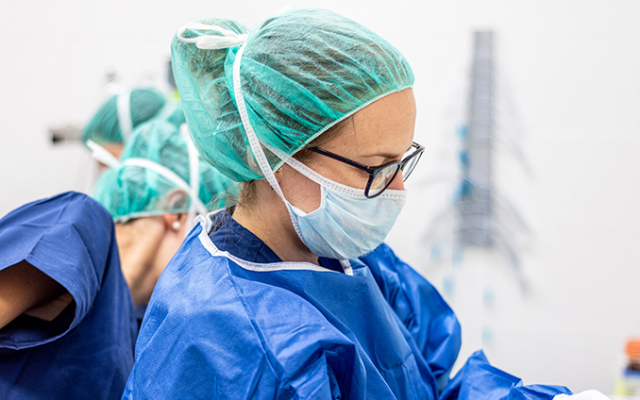 Current advice for COVID-19 health workers is based on the assumption that droplets bearing the virus travel no further than 2 metres and do not remain in the air. The body of published evidence suggests otherwise.

Healthcare workers are advised to stay 1.5 m away from other COVID-19 patients – an adaptation of hospital guidelines which stipulate that 1-2m is a safe distance from an infectious patient. A study by UNSW and MIT that set out to examine the data upon which this rule is based, found that respiratory droplets which may carry virus can travel well beyond the accepted 1-2m safety zone.

In a systematic review published today in the Journal of Infectious Diseases, the authors from UNSW Sydney and Massachusetts Institute of Technology (MIT) examined the available literature on the horizontal distance travelled by respiratory droplets. They found that the available scientific evidence does not support the assumption that contamination from symptomatic patients would only occur within a 1-2m safe distance for spatial separation.

The authors say the 1-2 metre rule, which is part of the guidelines set by the World Health Organisation (WHO) and other agencies, dates back to the 1930s. It is founded on the belief that large droplets emitted by exhalations– or those able to be seen or felt when someone coughs or sneezes near you – do not travel beyond this distance, and do not remain suspended in the air.

But in 10 studies reviewed by the authors on the distance travelled by droplets from various types of exhalations, eight found that they travelled more than 2m and up to 8m from the person emitting them.

UNSW’s Professor Raina MacIntyre, head of the Biosecurity Program at the Kirby Institute, says that the study also has implications for guidelines on social distancing.

“Up until now it has been assumed that the large droplets expelled from exhalations fall to the ground quickly,” she says.

“The guidance we are given for social distancing of 1.5 metres is based on the belief that 1-2 metres is a safe distance to avoid being sprayed by large droplets and that these droplets would be the main emissions containing the virus and able to cause disease.

“But the body of evidence shows that droplets can be expelled further than 2m. Smaller particles that can’t be seen or felt may remain suspended in a 'cloud' and then carried for hours in ambient air, so they can end up traveling much longer distances.”

“The evidence we reviewed in the present study on distances reached by a range of exhalations – coupled with the SARS-CoV-2-specific studies reporting the virus being identified up to 4 metres from a patient or in air vents – are consistent with the cloud dynamics of exhalations,” she says.

“This means the virus can have an extended range of contamination in the air compared to the short-range, surface-only contamination assumed from current definitions of the droplet route of transmission.

“Taken together with evidence of possible persistence of infectiousness of the virus for a few hours in laboratory conditions, the study calls for greater precautions with clear implications for protection of healthcare workers."

UNSW Engineering’s Prateek Bahl, who is the paper’s lead author, echoes this sentiment, saying the study will give clinicians “a more comprehensive picture of the mechanisms underlying infection transmission via exhalations, which is important at this time of COVID-19 pandemic and beyond”.

The authors say the continuum between droplets and airborne transmission of the virus mean the two different levels of protection currently advised for health care workers treating COVID-19 patients need re-evaluating. In both cases, medical staff wear gloves, gowns and eye protection, but use surgical masks to protect against droplets, while respirator masks – such as N95 or P2 – are worn for airborne viruses. The latest evidence suggests respirators should be the first and only choice for front line health professionals.

UNSW Engineering’s Professor Con Doolan says this makes sense because of the complicated physics of droplets and aerosols.

“When you sneeze or cough, the droplets are created in random ways and can travel much further than we previously thought. We really don’t know how the droplets interact with surgical masks and until we understand that, then we should be using respirator masks.”

The study has the potential to clarify discrepancies in recommendations from various international and governmental health organisations as each country scrambles to cope with the COVID-19 threat. The WHO currently recommends healthcare workers caring for suspected COVID-19 patients adopt precautions against contact and droplet transmission of the virus, while the US Centre for Disease Control (CDC) initially recommended adopting precautions against airborne transmission.

Professor MacIntyre says if the evidence suggests droplets can travel further than 2m, then “the air inside a standard hospital room could be contaminated beyond that distance”.

"Given the high case fatality rate and documented deaths of health workers from COVID-19, the ‘precautionary principle’ and use of a respirator is warranted,” she says.

“The global shortages of PPE [personal protective equipment] should ideally not drive policy. We should instead focus on scaling up PPE manufacturing capacity in all countries.”

The authors say this study reveals the limited scientific data informing spatial separation guidelines and highlights a growing body of evidence supporting that the current guidelines would benefit to be revisited in the context of SARS-CoV-2.