'When chemistry became biology': looking for the origins of life in hot springs

Hot springs may have been the ‘spark’ that helped organic matter turn into life – these UNSW Sydney scientists have put this hypothesis to the test in New Zealand. 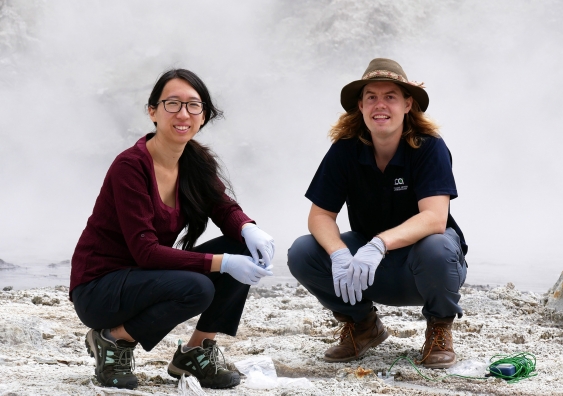 50 years ago, a meteorite landed in Victoria carrying many of the building blocks for life, including amino acids, nucleobases and lipids. These organic molecules formed when compounds in stardust, which had collected on the meteorite, reacted under low temperatures and UV light as it passed through space.

Many astrobiologists think life on Earth could have been kickstarted when meteorites carrying similar organic matter fell to the planet around four billion years ago.

The big question is how this organic matter along with what was already on Earth – called prebiotic ‘soup’ – turned into life.

“We think hot springs on the Earth’s surface hold the answer,” says Mr Luke Steller, PhD candidate at UNSW’s Australian Centre for Astrobiology. “Their elevated temperature and exposure to the atmosphere allow for a unique process that underwater environments don’t offer.

“The cycle of dehydration (by evaporation) and rehydration (by splashing from geysers or pools) in hot springs allows small lipid bubbles called ‘vesicles’ to form around molecules.

“Vesicles containing the right genetic material could have conceivably been ‘protocells’ – the ancestors of modern living cells.”

Mr Steller is currently collaborating with Dr Anna Wang, Scientia Fellow in the School of Chemistry, to trace when – and how – chemistry became biology.

“Almost any sort of chemical reaction could happen in a hot spring,” says Dr Wang.

“If you combine that with the extra-terrestrial material bombarding the planet four billion years ago, they become the most chemically-exciting places on Earth.”

It starts with a bubble 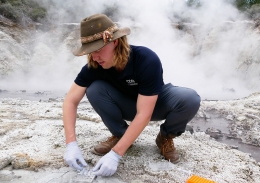 Vesicles, also known as lipid membranes, play a vital role in protecting the genetic molecules in our cells and, potentially, the ancestors to all cells.

“A bubble around some molecules is the first step towards an individual organism,” says Mr Steller. “This entity, a protocell, could be capable of competing with other protocells and start undergoing Darwinian evolution.

“Without a barrier, there is nothing to separate the genetic material from anything else – it would be dilute and part of a homogeneous soup.”

The researchers were inspired by the efforts of Prof David Deamer and Dr Bruce Damer from the University of California, Santa Cruz, to test vesicle formation in a real-world lab.

Mr Steller and Dr Wang prepared vials of lipids (fatty acids) like those found in meteorites and RNA – a nucleic acid essential for life. RNA is theorised to have been present in early Earth.

Combined with hot spring water (containing dissolved minerals and salts), this mixture is an example of a prebiotic soup that might have led to the first replicating cell.

“When we first mixed the prebiotic soup with the hot spring water and submerged the vials into a hot spring, the high temperatures dried out the ingredients,” says Mr Steller. “This process of drying down the lipids and RNA together ‘trapped’ the concentrated RNA between the lipid layers.”

When the soup was rehydrated – a process that occurs naturally in hot springs by splashing – the researchers saw vesicles containing concentrated RNA form.

“By having these wet-dry cycles, all the important organic molecules floating around gets crammed inside one little place. This can help the molecules interact and chemically react.

“Being compartmentalised, these vesicles suddenly have their own ‘identities’ and can start competing, increasing in complexity and evolving towards something life-like.” 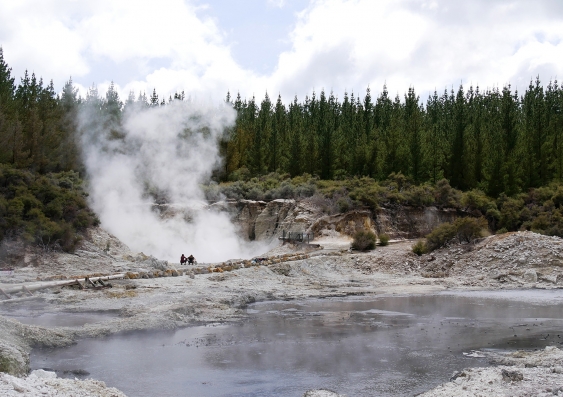 “Early Earth was a messy place,” says Mr Steller. “There were many different minerals and water chemistries present, and clays bubbling around in hot spring pools.

“There was a lot of splashing, lightning and different fluids and gases all getting churned up, boiled and mixed around.”

Travelling to Rotorua offered an opportunity for the researchers to ‘ground-proof’ experiments and show that concepts demonstrated in the lab are robust enough to stay true in messier environments.

“While we can’t go back in time, we have geological evidence that hot springs were present on early Earth. In some ways, visiting hot springs feels like going back to the source.”

The building blocks of life

Dr Wang is fascinated by the first self-assembly step to life on Earth: where chemicals were able to come together and transition into biology.

“All of these factors came together once – and it was so successful that it was able to persist through billions of years and evolve into all of life that we see today.

“There is shared chemistry to plants, viruses, bacteria, and us. Understanding how it all came about could help us build better microreactors for manufacturing biological goods, or to identify potential drug targets for disease.”

Mr Steller is part of a wider team at UNSW assisting NASA in understanding how life may have been preserved on other planets in our solar system.

“The origin of life is part of humanity's narrative,” he says.

“Learning more about it isn’t only beneficial for science, it’s helping us develop our understanding of who we are and our place in the universe.”