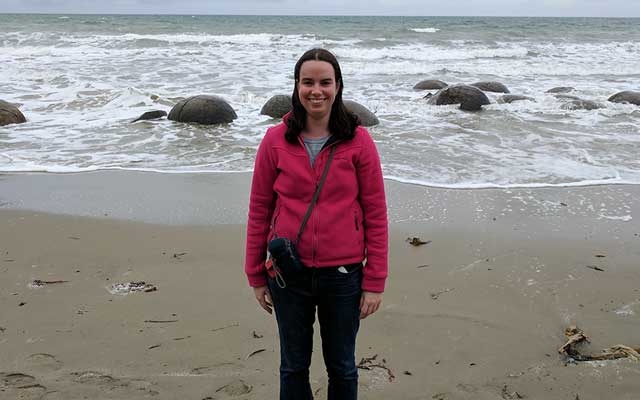 Alumna Lauren Spooner’s career path changed course when she took a first-year computing course. She switched from Electrical Engineering to a double degree so that she could incorporate Computer Science and has never looked back. Today she is a Software Engineer at Google.

We catch-up with Lauren to find out what it is like working at Google and what advice she has for computer science and engineering students.

What led you to study Computer Science?

I started university in an electrical engineering degree, but took a risk in first year by taking the higher-level computing course (COMP1917). The course really opened my eyes to what you could do with programming and I fell in love. I switched into a double degree, graduating with electrical engineering and computer science and I now have a career as a software engineer.

Can you tell us about your roles since graduating? What is it like to work at Google?

I work as a software engineer in the Network Software team at Google. My main job is to help write programs that automate the planning of Google’s network. I really love working at Google, you get to work on challenging problems that are at an unbelievable scale, and the culture in the Sydney office is very relaxed and flexible.

What are the benefits of completing a double engineering degree? Have you found it useful in your career?

I didn’t intend to do a double degree when I started uni. The reason I completed one was because I love learning and I couldn’t choose which degree I wanted to finish, it wasn’t specifically a career choice. That said there are some benefits, I came out of uni with more knowledge than the average undergrad and I had qualifications for a wider range of jobs, which I think increased my odds of getting a job offer. In my current career I don’t use my electrical engineering degree a lot, but it occasionally comes in handy when trying to understand how the network operates at a physical level.

What’s your favourite/fondest or most striking memory of studying at UNSW?

I think my favourite memory was participating in a puzzle quest at the end of COMP1917. It was a series of puzzles and challenges that the lecturer put up for fun, there was no real reward, but there was still a whole group of us that couldn’t help but attempt to solve the puzzles, and they became some of my best friends.

Get involved in as many projects as you can. Course work is great for teaching you the basics but the more projects you do, particularly with other people, the better you get at designing systems and thinking through problems you haven’t seen before, which are really useful if you make a career out of computer science.

What character traits/skills do you think are important for engineers to cultivate?

I think one of the main traits that makes engineers employable is the ability to look at a completely new problem and find common themes in problems they’ve encountered before. It’s not all about plugging numbers into equations or algorithms, you have to understand how to bend a problem to your will.

The other thing that I think is really important is the art of explaining. Almost no one works in isolation, and if you can’t explain what you’re doing to the people around you your ideas are less likely to be implemented and you’re less likely to get help when you need it.