Britain had an urgent problem after it lost its American colonies: where to send its convicts. It settled on NSW after rejecting other options, but the new spot didn't exactly live up to its billing.

After Captain Cook’s Endeavour voyage in 1770, the east coast of Australia was drawn on European maps of the globe for the first time. Yet, in terms of European contact with the continent, there was an 18-year lull in between Cook’s 1770 landings and the arrival of the First Fleet in 1788.

The main reason for this was Britain’s preoccupation with subduing its rebellious colonists in the War of American Independence from 1776-83.

Britain’s defeat in that war brought forth an urgent problem that eventually led to the colonisation of Australia: what it saw as a need to dispose of convicts who were overflowing the available prisons at home.

Previously, many British convicts were transported to the American colonies but after independence this option was no longer available. 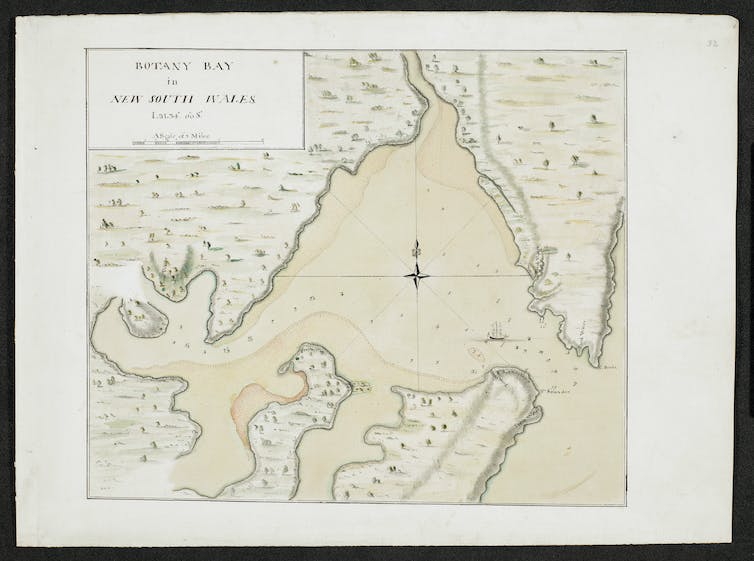 The next penal colony: let the search begin

Discussions about alternative penal colonies meshed with Britain’s larger strategic and commercial goals at the time. Many hoped a new convict settlement would provide a base for extending British power in the wake of the American debacle and be “advantageous both to navigation and commerce”.

The search began in 1779 when the House of Commons established a committee under the chairmanship of British politician Sir Charles Bunbury. Various locations were considered, in particular, Senegal and Gambia on the west African coast.

But a new destination soon emerged with the testimony of Joseph Banks, the botanist on board the Endeavour, who had recently been elected president of the Royal Society. Botany Bay on the Australian coast, he contended, would be the best site for a penal colony since it had a Mediterranean climate and would be fertile. Banks added, too, that

there would be little Probability of any Opposition from the Natives

It was a prediction that would ultimately prove incorrect.

The search for a penal settlement lost momentum during the war, but regained some sense of urgency with its end in 1783.

James Matra, an American-born seaman aboard the Endeavour, circulated a proposal among policy-makers about establishing a new settlement at Botany Bay. It was based on his own first-hand knowledge of the coast, as well as his discussions with Banks, who remained the most influential advocate for the site.

Matra’s most immediate concern was to provide a home for the American loyalists – those, like his own family, who had lost their property in the new United States because of their loyalty to the British crown during the war.

After Matra submitted his proposal, another House of Commons committee was established in 1785, chaired by Lord Beauchamp. Both Matra and Banks gave evidence in favour of Botany Bay, with Banks arguing,

from the fertility of the soil, the timid disposition of the inhabitants and the climate being so analogous to that of Europe I give the place the preference to all that I have seen

The committee, however, opted for an African site. It believed Das Voltas Bay, in southwest Africa, could reduce British dependence on the Dutch Cape of Good Hope in what is now South Africa and serve as a refuge for the American loyalists.

Before venturing down the path of establishing a colony, however, an exploratory voyage was sent to the African coast. It concluded the site was unsuitable as it lacked an effective harbour and fertile land.

Botany Bay was back in serious contention.

Other supporters soon emerged to sing the praises of Botany Bay.

Sir George Young, a naval officer and former East India Company officer, argued a colony at the site could serve as a base for trade with South America and underlined its strategic importance. If war broke out with Spain in the region, Botany Bay could be a place of refuge for British naval vessels.

Another advocate, John Call, an engineer with the East India Company, saw the advantages of a secondary settlement on nearby Norfolk Island. Flax grew in abundance on the island, he said, and the mighty Norfolk pine tree would be ideal for the masts of ships.

These observations were based on reports from Cook’s second and third Pacific voyages. The second included a visit to Norfolk Island, while the third ventured to the northwestern coast of America and traded furs in China, further fuelling British aspirations for Pacific trade.

Such arguments eventually led Prime Minister William Pitt and his Cabinet to accept the proposal to establish the settlement at Botany Bay. 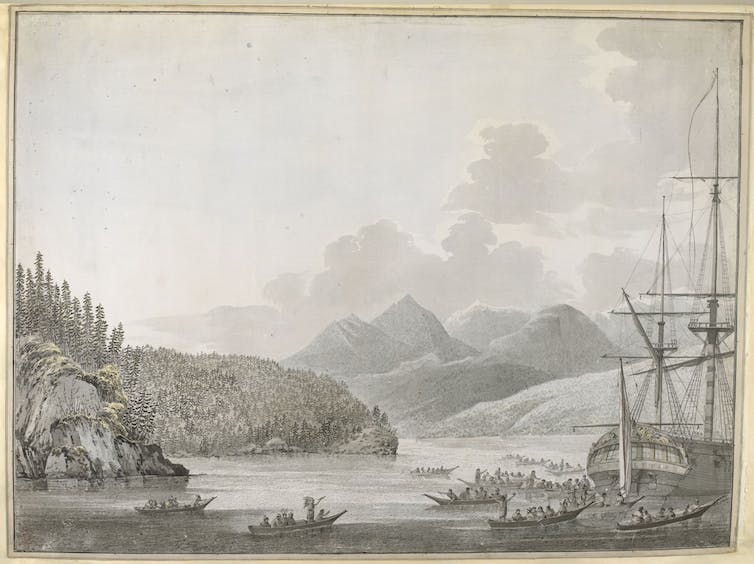 A drawing by John Webber depicting the arrival of Cook’s ship in Nootka Sound in April 1778 on his search for the Northwest Passage. British Library

Such a settlement demanded an unprecedented degree of state planning and financing.

The First Fleet, for example, consisted of 11 ships (no larger than the Manly ferry) that carried, among other things, a supply of seeds from Banks to help establish a “new Europe” on the other side of the Earth.

The convicts sent to New South Wales also incurred considerable state expense compared to those sent to America. From 1788-89, the new colony accumulated expenses of over 250,000 pounds, which equated to 100 pounds per convict per annum.

The fact it cost considerably more to transport a convict to New South Wales than to keep him or her in a British jail supported the view held by some in England that the penal colony was a subterfuge for broader strategic goals.

Rival nations also thought the British were trying to deceive them. Alejandro Malaspina, who captained a Spanish expedition that visited Sydney in 1793, thought the settlement could be a potential naval base for an attack on Spanish America. 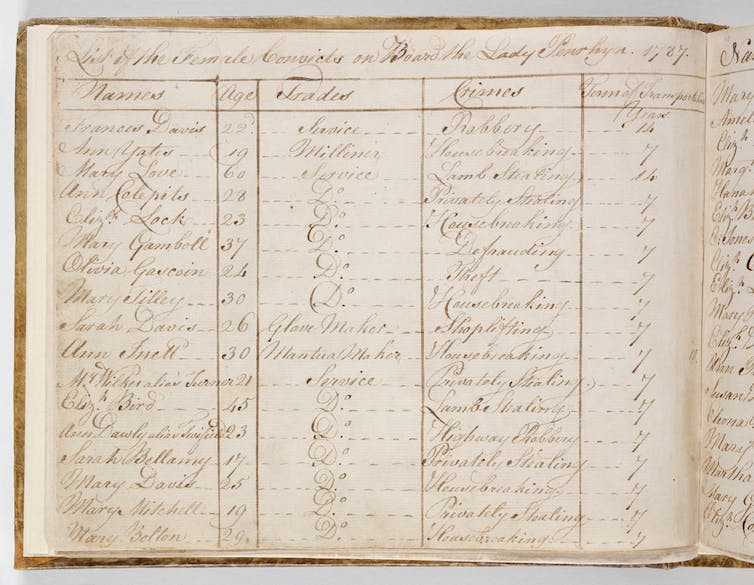 A list of female convicts onboard the Lady Penrhyn in the First Fleet. Wikimedia Commons

A repository for convicts

And yet, in the end, the settlement at New South Wales did little to advance British strategic goals.

The site lacked a naval base and its defences were so weak, François Péron, a naturalist aboard the French Baudin expedition that circumnavigated much of Australia from 1801-03, thought it could be easily captured.

In fact, no naval expedition was mounted from New South Wales during the Napoleonic wars of 1803-15. Nor did New South Wales live up to the commercial benefits some had invested in it. Tropical fruits and spices would not grow in Sydney, and Norfolk Island proved a disappointment as a source for naval supplies.

The American loyalists also chose to resettle in nearby Canada instead of distant New South Wales.

But New South Wales proved to cater to the most immediate reason for British settlement: a repository for convicts.