A UNSW music ensemble refused to let the pandemic stop them from performing a very rarely played musical score tracing a 24-hour cycle of birdsong. 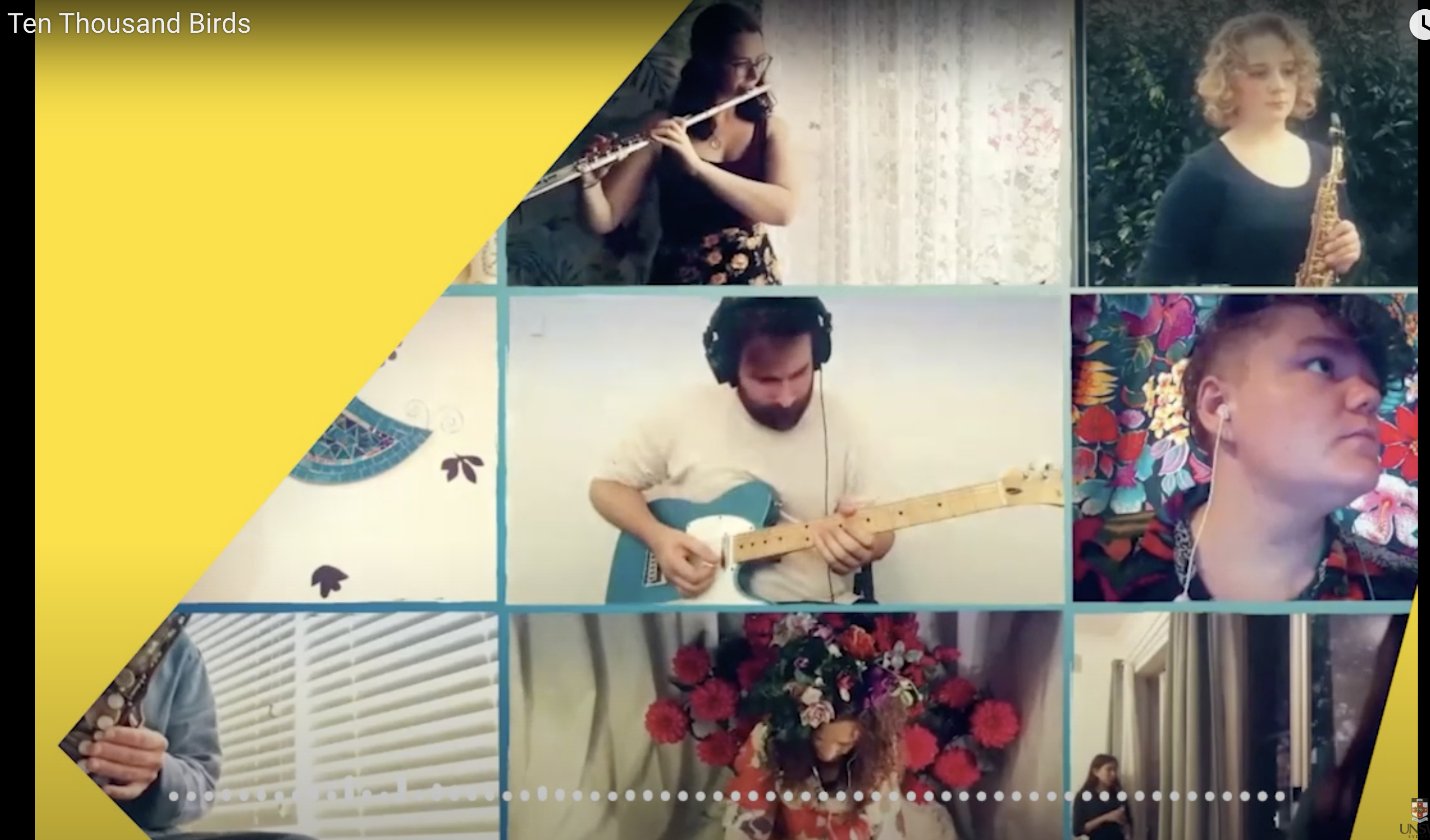 UNSW’s lecturer Sonya Lifschitz says her student ensemble was forced to adapt when COVID-19 sent them into lockdown about a month into rehearsals for Ten Thousand Birds.

“I was determined to keep the band going, and that meant we had to find imaginative and adaptive ways of presenting this work,” Dr. Lifschitz, from the School of Arts and Media, says.

The internationally acclaimed pianist and music lecturer directed the artistic video with 14 of her students from the UNSW New Music Collective before it was successfully broadcast during an online event in May, produced by SAM’s Creative Practice Lab.

“It's a piece that traces birdsong throughout a 24-hour cycle from morning through to midday, afternoon, evening, night, and then the following morning,” Dr. Lifschitz says.

The students recorded themselves playing their instruments at home and the video clips were then collated into a one-hour seamless production.

Dr. Lifschitz says they have all learned “an incredible amount of patience” working from home and rehearsing online, which has presented its own set of challenges.

Some of those challenges included noise disruptions such as neighbours taking their bins out, lawnmowers, or cars rushing past which often occurred “during the best recording take of the day”, she says.

“I think we all became really good at creating movie sets in our living rooms, kitchens, bedrooms, attics and backyards,” she says, refering to the visual backgrounds for each video vignette recorded.

“And we all got a very real sense and appreciation about how a crisis really is an opportunity”.

“So, I think this was a great lesson in terms of how limitations make us more resilient, more creative, more resourceful and more inventive. And that there’s always positives in any kind of challenge.”

Dr. Lifschitz says the huge learning curve has made the experience incredibly rich and rewarding, and that it brought them all much closer together as an ensemble.

“We've all come out of it so much more knowledgeable,” she says. “It gave students individual agency and the freedom to take initiative. They poured 300 per cent into it and went beyond anything I expected.

“The amount of work they put into it was phenomenal. And they really took leadership, with older, more experienced students taking on mentoring roles.”

“John has spent about 40 years in Alaska, and his music is deeply connected to the land, to nature, the landscape and to notions of natural life cycles. I think a lot of John's music also stems from his fascination, love and obsession with birds and birdsong – natures’s first composers.”

Dr. Lifschitz says she is always on the lookout for interesting, unusual and unique repertoire for her New Music Collective at UNSW Arts & Social Sciences.

“We are a very eclectic and unusual band, with very unusual instrumentation, from electric bass players to classical flutists; from improvisers to classically trained musicians,” she says.

The John Luther Adams piece, which provides a kind of performance kit, a loose folio of birdcall transcriptions and a suggested sequence of events, is a brilliant educational opportunity because it leaves ample room for performers to effectively co-create, co-compose and complete the musical work themselves, Dr. Lifschitz says.

“This makes them feel part of the creative and compositional process.”

Lifschitz says Ten Thousand Birds has only been performed a few times in America and only once in Australia a couple of years ago.