How will sea level rise impact the world's estuarine cities? 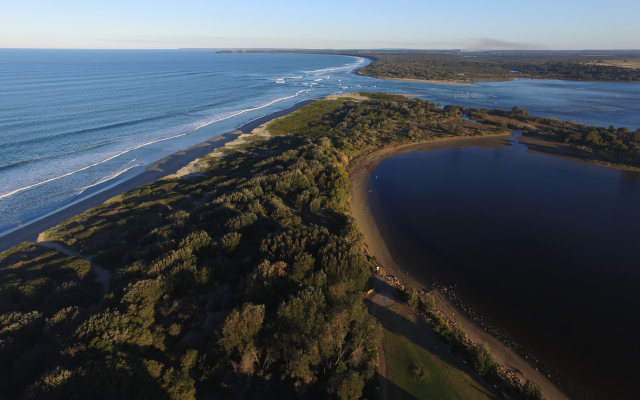 An international team of researchers from UNSW Sydney and EPFL in Switzerland has explored the hydrodynamic forces at play between estuaries and rising sea levels in a bid to shed new light on how estuaries are likely to respond to climate change, and to pave the way for preventive strategies. Their findings are published in the academic journal of Estuarine, Coastal and Shelf Science.

Approximately 60% of the world’s most populated cities are located adjacent to estuaries - where rivers meet the sea - and the list of estuarine cities features 21 of the world’s 30 biggest urban centers, including New York and Tokyo. Every single estuary around the world has a unique and complex tidal regime that depends on many factors such as its shape (i.e. length, or entrance morphology), tidal forcing and river inflows, making it extremely difficult to predict the impacts of sea level rise in these environments.

“The mix of fresh and saltwater makes estuaries – some extending inland for hundreds of miles in length – diverse and complex ecosystems. They also serve important social and economic functions, from freight transport to recreation and fishing.

Estuaries can be generally classified into two types – ones whose entrance is restricted and narrow, and ones with an unrestricted, wide entrance. Variations in sediment accretion and water discharge can cause entrance channels to change over time.

“By the end of the century, global sea levels will be substantially higher than today, with the predicted rise anywhere between a few dozen centimeters to 2.5 meters or more,” says UNSW co-author A/Prof. Will Glamore from UNSW Engineering.

“It all depends on the pace of global greenhouse gas emissions, and on how fast the Antarctic and Greenland ice sheets melt. But in all scenarios, rising sea levels will significantly alter tidal hydrodynamics in estuaries. The effects of these changes could be felt inland – including in the cities that sit on their shores. Worst-case predictions point to flooding and increased coastal erosion.”

The researchers studied various estuarine phenomena such as amplification, deformation and reflection (resonance) of tides with and without sea level rise – to identify potential thresholds and tipping points that might be triggered by rising sea levels.

“What we found is that the tidal range as well as the high tide water levels inside estuaries are reduced by up to 20–60 percent if a constriction exists at the interface between the estuary and the open ocean,” says UNSW co-author Dr. Stefan Felder, who organized the collaboration with EPFL.

The team used an ensemble model representing around 200 estuaries with unique shapes and levels of entrance constrictions to study likely hydrodynamic responses to sea level rises of between 0 and 2 meters. They fed a number of parameters into the model including estuary width-to-length ratio, entrance restriction, and tidal forcing.

“For each estuary we ran the model for 60 days, and took thousand of measurements every 15 minutes to produce a rich dataset,” Dr Felder says.

The need for adaptive and integrated management

The team’s findings suggest that a large number of estuarine cities and communities around the world are likely going to experience sea level rise impacts that are significantly worse than a simple rise in mean sea level as predicted for open coastal settings. Instead, sea level rise might induce potentially dramatic shifts in the tidal regime of estuaries, which might exceed the adaptive capacity of coastal communities.

“For example, in Australia, research has shown that in large coastal lake estuarine systems with restricted entrances, where the current tidal range is only a narrow fraction of that of the open ocean, even small increases in the mean sea level may lead to widespread flooding of established coastal communities,” UNSW co-author Dr. Valentin Heimhuber says.

Additional research as well as an intergenerational future planning horizon is needed to better predict and manage such poorly understood hazards.

In 2019, the UNSW researchers involved in this work published the first large-scale summary of how our estuaries – and the 80 per cent of NSW residents living in and around them – will be impacted by climate change.

Anyone can use this free online resource see key findings from previous research or to add new research via an easy-to-use online map.

“Our goal – then and now – was to enable scientists and all levels of government to assess and act on threats posed to our coastal estuaries by climate change,” A/Prof. Glamore says.