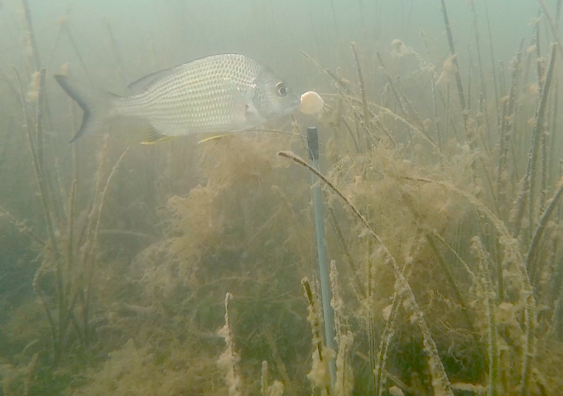 An international team of scientists including three UNSW researchers have sketched the first global “BiteMap”, showing where the ocean’s mid-sized predators are most active. By fishing with dried squid baits called “squid pops”, the team discovered rising temperatures can shape entire communities of predators, with potential impacts lower down the food web.

Knowing where small animals are most vulnerable to getting eaten has big implications for coastal ecosystems, where most of the world’s fishing takes place, since predators can radically change underwater communities.

The new study, published in the Proceedings of the National Academy of Sciences, was part of a project led by the Marine Global Earth Observatory (MarineGEO), which is headquartered at the Smithsonian Environmental Research Center and brings together partner researchers all over the world. 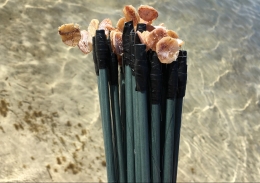 Squid pops that the researchers used for their "BiteMap". Photo: Prof. Alistair Poore

To map the appetites of coastal predators, scientists enticed fish and crabs with handmade treats called “squid pops”. Similar to the popular “cake pops” at coffee shops, a squid pop consists of a piece of dried squid meat attached to a stick.

“Most people think they’re lollipops, and I guess they could be for fish,” said co-author Jonathan Lefcheck, the coordinating scientist for MarineGEO.

Co-author and MarineGEO director Emmett Duffy invented the squid pops a few years ago. He was searching for a standardised way researchers anywhere in the world could measure fish feeding and compare results.

“We basically looked at every kind of bait you can possibly buy in a tackle shop....In the end we settled on this dried squid, and that’s kind of the gold standard,” he said.

Fish and crabs generally liked eating the squid in tests, and it’s easy for scientists to buy and store it in dried form. “I will say it stinks,” Duffy said.

Squid treats for predators all around the world

The team planted the squid pops at each field site—which included seagrass beds and underwater mudflats—and returned the next day to see how many of the pops had gotten eaten. They also surveyed the types of fish and crabs present, using seine nets at 30 of the sites and video cameras at 14 of them.

In total, the map covered 42 underwater sites spanning five continents.  They ranged from the southern tip of Australia to northern Norway just inside the Arctic Circle. Capturing the north-south range enabled the biologists to cover most of the global range in sea temperature. This, in turn, allowed them to explore how climate change could shape marine food webs in the future.

UNSW Science co-author Associate Professor Adriana Verges said the idea of doing the same experiment around the world to measure predation and how much gets eaten was a very elegant approach.

“This type of collaborative science, including 67 scientists from five continents, would have previously been completely impossible,” she said.

Co-author and Head of UNSW Science’s School of BEES, Professor Alistair Poore, said coordinated experiments like these were a powerful tool to address questions on a global scale.

“Underwater habitats are often strongly shaped by predators and herbivores, so it is critical to understand how consumption varies across the globe,” Prof. Poore said.

“Scientists routinely map variables like temperature on those scales, but rarely consider the important processes that influence our oceans.” 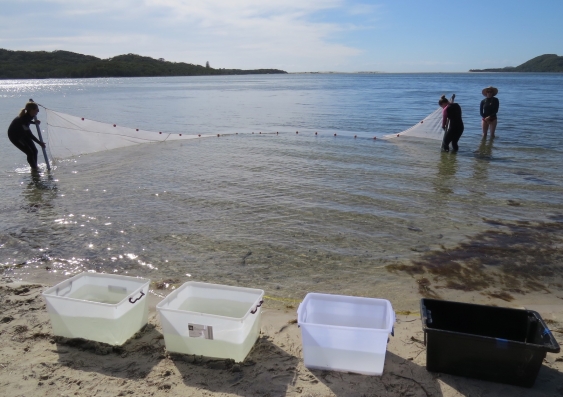 The team’s results were surprising.

“We normally expect predation to be most intense in the tropics, where temperatures are hottest, but this study had the surprising result that predation peaked in subtropical regions like NSW, where our team observed very high rates of predation," Prof. Poore said.

Although the squid pops disappeared faster in warm water, temperature also influenced the types of predators present at each site. Fish like porgies, half-beaks and grunts were among the most common animals caught on camera snacking on the squid pops. These fish were all but absent when scientists surveyed the hottest sites near the equator. In other words, warm waters not only increased appetites, but altered biodiversity. In fact, statistical analysis showed that temperature had a stronger influence on which animals were present at each site than on how much they were eating.

While warmer temperatures generally increase animal activities like eating, researchers are only just starting to grasp what those changes mean for marine ecosystems as a whole.

“While we have been able to use satellites and oceanographic buoys to understand how things like temperature or nutrients vary around the world, it is just as important to measure how species interact,” said A/Prof. Verges.

“We know predation can be an incredibly important force shaping ecological communities – it can determine what species are present in a certain ecosystem. For example, where there are a lot of top predators, we get healthier kelp forests, because the predators eat the sea urchins that would otherwise overgraze the kelp.”

A/Prof. Verges said understanding how predation changes around the world, and how it varies with temperature, can help us to predict future impacts of climate change, for example.

“The results from this study suggest that as the oceans continue to warm we may see increases in predation at the highest latitudes, for example around southern NSW, Victoria and Tasmania.”

The MarineGEO team now hopes to expand the “BiteMap” of marine predation to the rest of the world’s coasts. They’re especially eager to figure out why subtropical shores see more feeding frenzies from mid-sized fish and crabs. 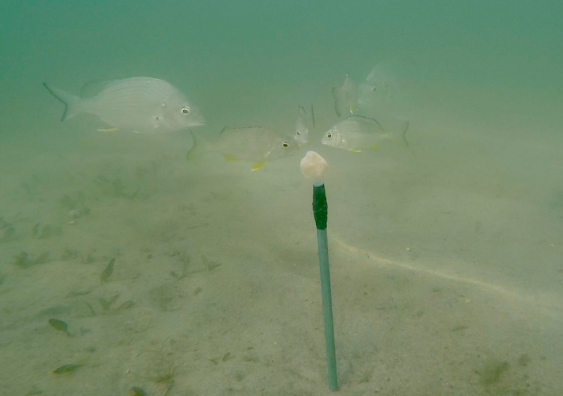 One of the unvegetated trials - nibbled by little bream. Photo: Prof. Alistair Poore