Shining a light on the weird world of dihydrogen phosphate anions

UNSW scientists show that dihydrogen phosphate anions actually bind to one another when their negative charges suggest they shouldn’t. 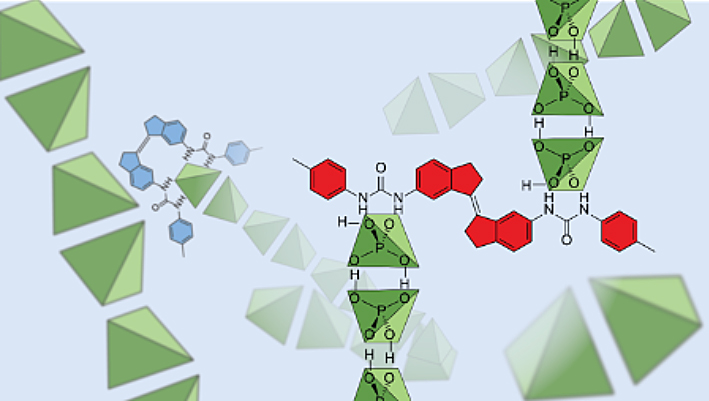 Representation showing dihydrogen phosphates (in green) binding together in solution.

The same team also made a molecule that could ‘grab’ these dihydrogen phosphate anions and depending on what coloured light was shone on them, either increase or inhibit their movement in solution.

The research, which was published recently in The Journal of the American Chemical Society, provides new insight into molecular interactions that occur during biochemical processes, while introducing new methods for controlling the transport of molecules in solution.

Associate Professor Jon Beves from UNSW’s School of Chemistry says chemists have always known dihydrogen phosphate was ‘a bit weird’ and hard to study in solution, but until now nobody knew what was really happening.

“Our work shows that these negatively charged anions are actually bound together, even in dilute solutions where hydrogen bonds are thought to be extremely weak,” he says.

“The hydrogen bonds between dihydrogen phosphate anions seem to be surprisingly strong. They’re strong enough to overcome like-charge repulsion, and strong enough to hold the anion clusters together even when dissolved in hydrogen-bonding solvents that we expected would tear them apart.”

A/Prof. Beves says the new understanding could also go some way towards explaining the structure of biological membranes, or how RNA or DNA are attracted to one another in solution, since these interactions all involve phosphate groups. And being able to control the movement of these molecules in solution by using light raises some interesting ideas about how this could be applied in biological or environmental situations.

“Mixed liquid solutions are made up of lots of molecules all moving and tumbling at random,” A/Prof. Beves says.

“This makes it really hard to do things like extract valuable or polluting metals from dilute solutions, or deliver drug molecules where they need to go in a human body. If we could control the movement of some of those molecules and tell them where to go, it could make those tasks much more achievable.”

But A/Prof. Beves stresses that such applications would be a long way down the track requiring much more research. For now, he’s excited about doing important work in a poorly understood area of fundamental chemistry.

He says the work his team carried out used an organic solvent called dimethyl sulfoxide and he imagines future studies would look at whether phosphate behaves in the same way in water, where all biological chemistry takes place.

But for the next step, his team is looking at exploring how molecules can be actively transported in solution.

“Our next goals will be to use these types of interactions to actively drive the transport of molecules using light – for example, using a laser pointer to direct molecules to move.”