If history is any guide, the new US president’s forward-thinking approach toward refugee resettlement could help drive Australia’s commitments to refugee protection, too. 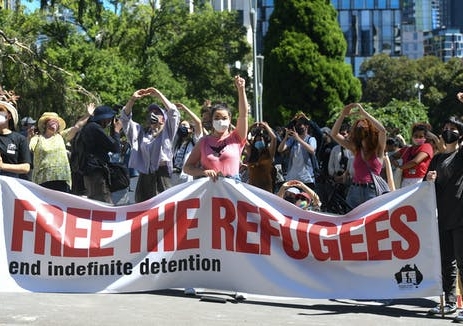 As a presidential candidate, Joe Biden promised the US would demonstrate “global leadership on refugees”. Once elected, he pledged to vastly increase refugee resettlement in the US.

If history is any guide, the new president’s forward-thinking approach could help drive Australia’s commitments to refugee protection, as well.

Over the past four decades, the United States and Australia have contributed to international refugee resettlement through planned annual admission programs.

The annual US Refugee Admissions Program (USRAP) has traditionally operated on a much larger scale than any other country, with tens of thousands of places per year. Since 1980, the program has enabled more than 3 million people to find safety and build new lives in the US.

Under former President Donald Trump, however, the program was cut to historic lows of just 15,000 places for the year beginning in October 2020. 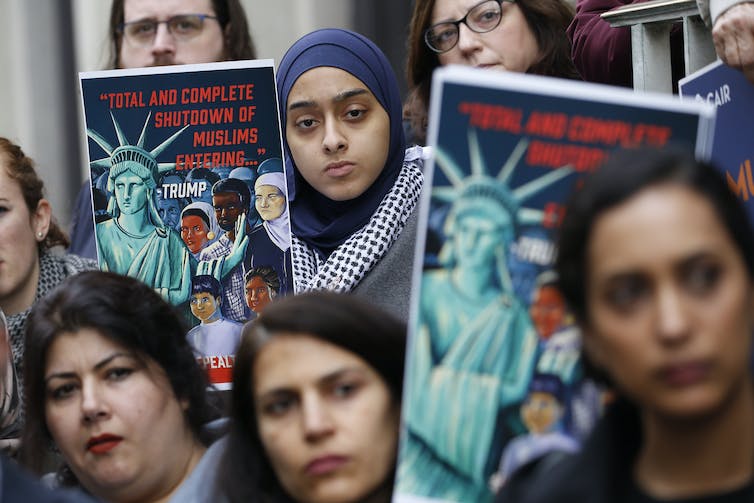 A rally against Trump’s refugee policy in October. Steve Helber/AP

Less dramatically, Australia’s quota for the admission of refugees and others in humanitarian need was similarly reduced from 18,750 in 2019-20 to 13,750 in 2020-21, a cut attributed to travel restrictions imposed due to COVID-19.

Revitalising the US refugee program is one of the many tasks facing the newly installed Biden administration, in addition to revising US asylum policy for those seeking protection at the borders.

At that time, resettlement was valued as a “foreign policy priority” for the US, with President Barack Obama joining UN Secretary-General Ban Ki-Moon in hosting a Leaders’ Summit on Refugees in 2016 to address record levels of global displacement, including from Syria.

The Australian government participated in that initiative and pledged to increase its annual humanitarian intake to 19,000 by 2018. The summit demonstrated how leadership by the US can have direct impact and influence on the actions of other states.

Read more: With our borders shut, this is the ideal time to overhaul our asylum seeker policies

Australia has similarly tried to boost its reputation

By increasing the US resettlement numbers now, Biden is looking to rebuild America’s image abroad.

This is a tried and tested tool, evident in the Ford and Carter administration’s large-scale admission of Vietnamese refugees in the aftermath of the disastrous war in Vietnam.

Previous Australian governments have also sought to improve the country’s image through the rosy glow of resettlement contributions.

However, the optics did not prevent the UN High Commissioner for Human Rights from decrying a week later the lack of transparency around offshore detention in Australia and the inability of asylum seekers to access medical care and independent legal advice.

Most recently, the Australian government this month cited the country’s “generous” humanitarian program in its formal response to UN concerns about the treatment of asylum seekers here.

US and Australia policies have long echoed one another

Whether the Biden administration could influence Australia’s treatment of asylum seekers is hard to gauge.

The US has been a model for Australia’s harsh asylum policies over the years. The US Coast Guard, for instance, was interdicting asylum seeker boats under the Reagan administration, years before the Howard government adopted the practice in 2001.

And in the early 1990s, the Bush and Clinton administrations authorised the detention of Haitian refugees at the Guantanamo Bay naval base — a practice later adopted by Australia on Manus Island and Nauru.

Read more: Yes, the US border policy is harsh – but Australia's treatment of refugee children has also been deplorable

And at times, Australia has influenced the US. In a phone call with Trump following his inauguration in January 2017, then-Prime Minister Malcolm Turnbull expressed support for Trump’s promotion of hard-line immigration control, and claimed that Australia had “inform[ed] your approach”. Turnbull said,

We have, as you know, taken a very strong line on national security and border protection here […] We are very much of the same mind.

Could the Biden administration lean on Canberra now?

If Biden follows through on his pledge to reinstate America’s “historic role in protecting the vulnerable”, he may prove to be a very different kind of leader.

The Obama era could provide some clues to the Biden approach. In 2015, the head of the Department of State’s refugee bureau encouraged Australia to

be with us again in really being leaders in humanitarian response to migrants and refugees in the region.

Unsuccessful in this effort, the Obama administration did what it could, signing a resettlement deal with the Turnbull government in 2016 to get refugees off Manus and Nauru and grant them entry to the United States.

The deal was loudly criticised but reluctantly upheld by the Trump administration (even though Trump struggled to understand what he called Australia’s “thing with boats”).

Importantly, the deal was reportedly predicated on Australia “doing more” for refugees elsewhere in the world. Signs of this effort were evident in Australia’s increased refugee admission quotas of recent years.

If the Biden administration leans on Canberra in a similar way, we may see Australia return to a higher resettlement quota.

Perhaps we will also see humane solutions for those who came by boat seeking Australia’s protection and are still being detained in hotels and remote detention facilities — including young children.

There are glimmers of hope. In recent days, for instance, the Australian government released dozens of refugees and asylum seekers from detention.

However, these men have been given short-term visas, which means they will continue to face an uncertain future — a product of current government policy that affects many thousands of refugees living in Australia today.

It is clear that leadership by the US, Australia’s major ally, is needed now more than ever.