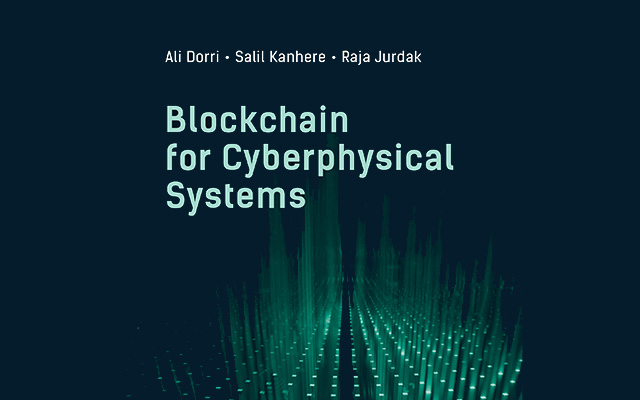 Professor Salil Kanhere in collaboration with his former PhD student, Ali Dorri and Professor Raja Jurdak, both of whom are at Queensland University of Technology have written a book titled Blockchain for Cyberphysical Systems released by Artech House in October 2020.

This book covers a journey that the team started in 2016 to investigate the potential of blockchain for cyber-physical systems (CPS). At the time, Salil and Raja had been involved in IoT research over many years, and blockchain had been around for several years as the underpinning technology for bitcoin and other cryptocurrencies. However, within a cyber-physical context, blockchain’s potential was underexplored. In March 2016, Ali started his PhD at UNSW under Salil’s and Raja’s supervision, and the focus of his PhD research was blockchain in the Internet of Things (IoT). This research quickly led to a position paper in 2016, followed by a series of foundational papers that proposed of a lightweight scalable blockchain for IoT. The team also investigated related topics, such as how to remove blocks from immutable blockchains to save memory and preserve privacy in large scale CPS, and the application of blockchain in cyber-physical scenarios ranging from connected and autonomous vehicles to smart grids.

Along this journey, several PhD students and researchers joined the team across Sydney and Brisbane to investigate new directions of blockchain for cyber-physical systems, investigating horizontal challenges such as anonymity in blockchain transactions that store sensor data to trust in cyber-physical data and entities, and new applications from traceability in sensor-supported supply chains, to IoT data marketplaces. These new directions enriched the team's research in this area and helped identify new challenges and opportunities for blockchain in CPS.

This book is the culmination of their four-year journey in developing blockchain for CPS with the aim to share with readers the steps in our journey and the learnings that were derived from it. The book is structured into 3 parts. The first part introduces CPS, their challenges, opportunities, current solutions, and the potential of blockchain in this context. The second part discusses the horizontal blockchain challenges and solutions for CPS, such as scalability, immutability, anonymity, and trust, while the third part covers vertical applications of blockchain for CPS.

At the time of writing of this book, blockchain for CPS is a flourishing research area with a growing researcher base globally. The team hopes that they have played a part in the growth and uptake of this area.

The book is available through Artech House.