All the colours of the dingo: not just a yellow dog

Animals assumed to be dingo-dog hybrids based on their coat colour and culled may have been pure dingoes, a study involving UNSW finds. 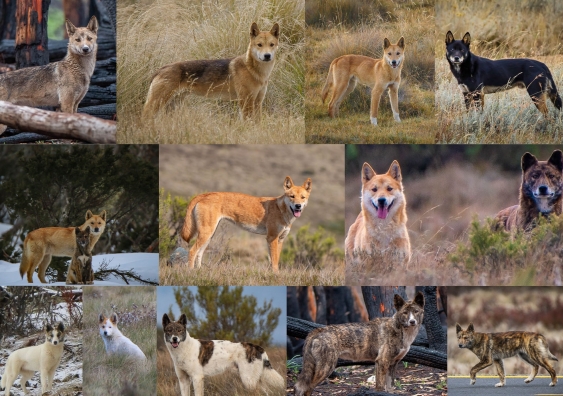 There is no coat colour that distinguishes dingoes from dingo-dog hybrids, a study involving UNSW Sydney has found.

The Centre for Ecosystem Science research suggests that animals assumed to be dingo-dog hybrids based on their coat colour and culled may have been pure dingoes.

“We actually found pure dingoes that had a brindle, black and tan, patchy or sable coat colour,” Dr Kylie Cairns, a conservation biologist from UNSW Sydney and co-author of the study said.

“So that's showing that really dingoes are much more variable than we think and seeing an animal with an odd coat colour doesn't immediately mean that it's a hybrid.

“Using coat colour to decide what animals should be culled is not a very good idea.”

The study follows 2019 research by UNSW and collaborators which found that almost all wild dogs in NSW are dingoes or dingo-dominant hybrids, challenging the widely held view that pure dingoes are virtually extinct in the state.

In Australia, dingoes are typically believed to be ginger in colour, while unusual coat colours such as brindle (black and brown stripes) or sable (ginger with a black stripe along the spine) are widely put forward to be evidence of contemporary domestic dog hybridisation.

They examined the relationship between coat colour and ancestry in wild dingoes by testing the genetic makeup of 1325 wild canids (animals belonging to the Canidae family, such as dingoes, domestic dogs and wolves) across south-eastern NSW.

They found that domestic dogs with no dingo ancestry are rare in the wild, representing less than 1.5 per cent of the population.

There was also no coat colour that could distinguish dingoes with or without dog ancestry from each other, or from domestic dogs.

“The widely held idea is that a dingo is ginger animal with white socks and a white tail tip,” Michael Letnic, senior author of the paper and professor in conservation biology and ecosystem restoration at  UNSW Science said.

“But a key finding of this work is that coat colour should not be used to assess ancestry in dingoes.”

The researchers suggest that other features such as floppy ears or a broad snout shape could be used to identify feral domestic dogs or recent dingo-dog hybrids.

The researchers are planning to use updated genetic techniques to look at dingo ancestry across Australia to uncover the origin of some of the coat colours.

“We want to examine whether these coat colours are ancestral or came from dogs originally but have been present in the population for 100 and 200 years,” Dr Cairns said.

“We are curious to see if coat colour is part of the natural selection and adaption in dingoes, or if there are other reasons for these coat colours.

“For example, the black coat colour in wolves came from dogs and is associated with increased immunity and so we want to look to see if there is a similar pattern in dingoes.”

Read the study in Journal of Zoology.