As the Mars Rover sets out to look for evidence of life on another planet, scientists back on Earth suggest viruses played a key role in creating stromatolites, our planet’s earliest lifeforms. 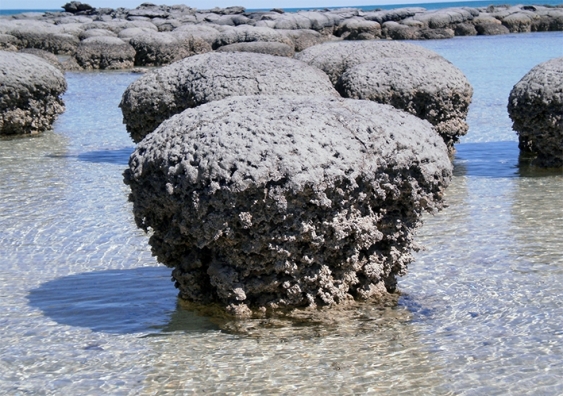 It may pain us to hear this during a deadly viral pandemic, but life as we know it on this planet may never have occurred if it weren’t for viruses, scientists studying billion-year-old ‘living rocks’ say.

In a paper published in the March issue of Trends in Microbiology, a team of scientists from UNSW Sydney and the US looked at evidence of the world’s oldest lifeforms in fossils known as stromatolites, layered limestone rocks often found in shallow waters around the globe. They wanted to understand the mechanism that led colonies of single-celled organisms known as microbial mats to create these intriguing rock structures.

And they believe viruses may be the missing piece of the puzzle that could help explain how a soft microbial mat transitions – or lithifies – into the hard stromatolite features that are prevalent in such places as Shark Bay and the Pilbara, Western Australia.

Co-author on the paper, Associate Professor Brendan Burns from UNSW’s Australian Centre for Astrobiology, says stromatolites are one of the oldest known microbial ecosystems, dating back some 3.7 billion years.

“Stromatolites are pervasive in the fossil record and are some of our earliest examples of life on Earth,” he says.

“The microbial mats that created them were predominantly made up of cyanobacteria, which used photosynthesis – like plants do – to turn sunlight into energy, while producing so much oxygen over time they changed the early Earth’s atmosphere to make it habitable for complex life.

“You could say we owe our very existence to these living rocks.” 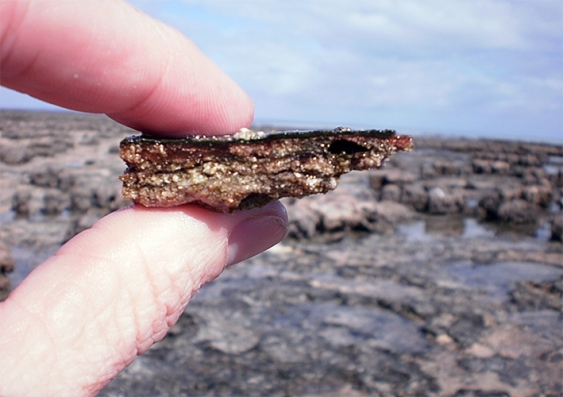 A shard of stromatolite rock found at Shark Bay showing layered sediments that was produced by microbial mats billions of years ago. Photo: UNSW/Brendan Burns

A/Prof. Burns and his colleagues wanted to understand the mechanism behind the microbial mats lithifying into stromatolites, not only because so little is known about the process, but because of what this could add to our knowledge about life on Earth – and possibly other planets.

“If we understand the mechanisms of stromatolite formation, we will have a better handle on the impact these ecosystems had on evolution of complex life,” he says.

“This knowledge may help us better interpret biosignatures – which you could call chemical or molecular fossils – that provide clues to the activities of early life, billions of years ago.

“It also has the potential to help us look for life on other planets – one of the jobs of the Mars 2020 mission is to look for evidence of biosignatures in Martian rock samples.”

In the paper, the authors postulate that microbial mat transition from soft cells to rock is enhanced by interactions with viruses.

“We propose viruses may have a direct or indirect impact on microbial metabolisms that govern the transition from microbial mat to stromatolite,” he says.

In the direct impact scenario, viruses infiltrate the nucleus of the cyanobacteria and influence the host metabolism, inserting and removing genes that increase the fitness of the virus and the host at the same time.

“This, in turn, increases survival of the microbial mat and selects for genes that potentially influence carbonate precipitation – basically the process of microbes pouring the concrete to make their stromatolite apartment blocks,” A/Prof. Burns says.

In the indirect scenario, the scientists talk about a process known as viral lysis, where viruses invade living cells and trigger the disintegration of their membranes and release of contents – effectively bringing about cell death.

“We think viral lysis may release material that promotes metabolism of organisms which results in mineral precipitation and eventual stromatolite formation.”

Whether viruses cause the microbial mats to harden into stromatolites directly or indirectly, or a combination of both, A/Prof. Burns says more research is needed.

“We’re hoping to do more studies in the lab to test this.

“We want to be able to identify what viruses are actually involved and see if we can then manipulate potential virus-host interaction to find out whether or not they can, in fact, change some of the metabolisms that might result in stromatolite formation,” A/Prof. Burns says.

Read the full paper in Trends in Microbiology: Between a Rock and a Soft Place: The Role of Viruses in Lithification of Modern Microbial Mats