All of our Black lives matter: The problems with policing Black Australian identities and experiences

We must engage in practices that demonstrate Black lives mattering all over the world because only then will we draw closer to actually dismantling white supremacy. 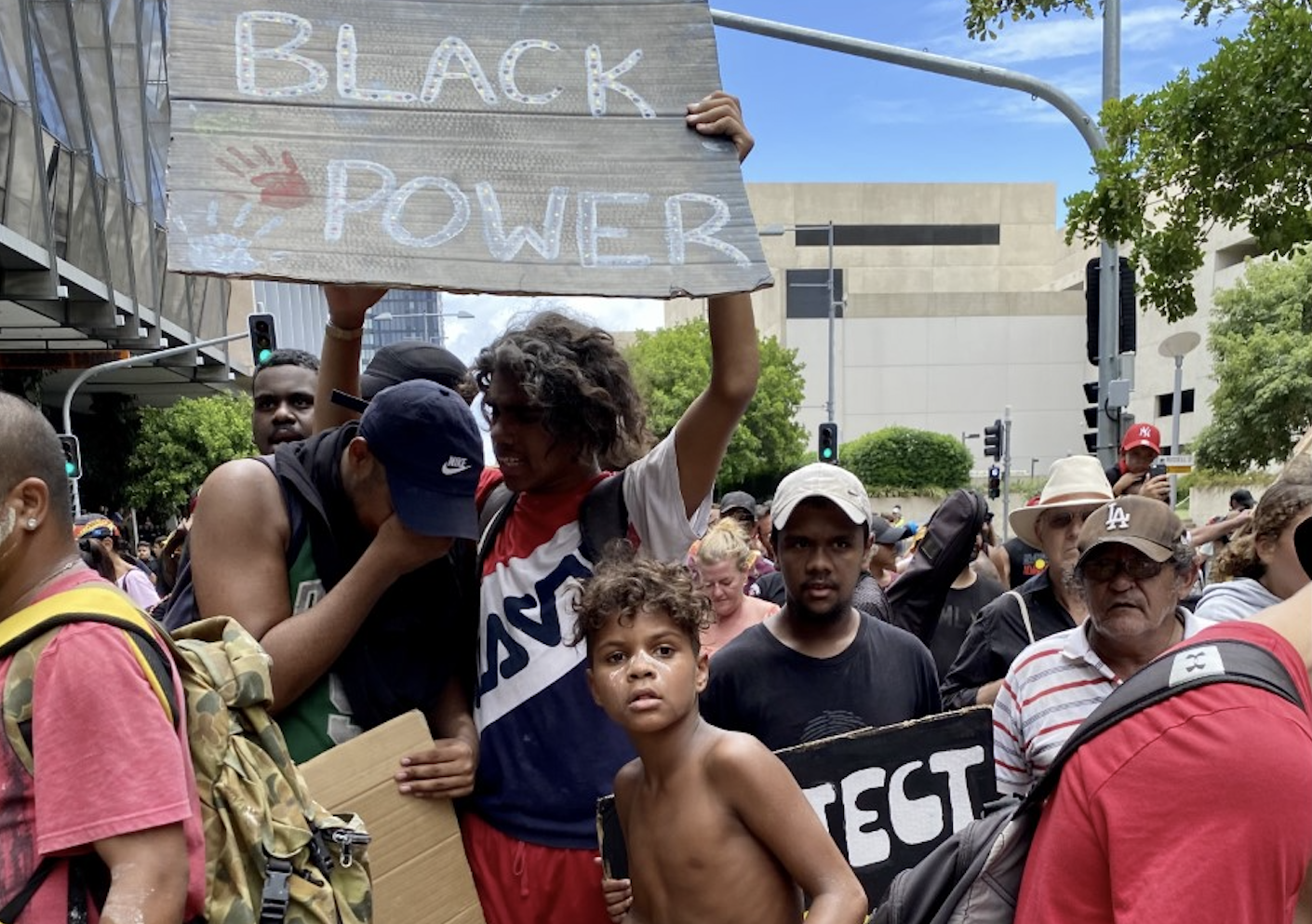 In the aftermath of the 2020 Black Lives Matter movement and the 2021 Invasion Day protests held across the country on Australia Day, we have seen online discussions emerge about the policing of Black identity, specifically Black identities situated outside of the United States of America – in this case, Australia.

These discussions can be reduced to the following: whether it is appropriate for Aboriginal and Torres Strait Islander peoples to identify as “Black”. This discussion is not new. In fact, it is old, it is tired and quite frankly it is time to finally put it to rest.

This piece is informed by my own lived experiences and practices as a Black Aboriginal Australian woman living, working, holding space and healing on the stolen unceded lands of my people. It is this journey that continues to shape my lens as an individual, lawyer and academic.

The Aboriginal and Torres Strait Islander community is unique in that we have historically identified, and continue to identify, as both Black and First Nations. This uniqueness is reflected in the way that our community spells and defines the term “Black”, with some subscribing to the traditional English spelling while others prefer “Blak” or “Bla(c)k)”.

It is also important to note that some members of our community use all three variations—Black, Blak and Bla(c)k—interchangeably (I certainly do). Although, over time we have seen a rise in the use of the latter two terms.

The term “Blak” was first coined by First Nations Australian artist Destiny Deacon in the early 1990s to create decolonial self-definition and expression. Decolonising the term “Black” by redefining the spelling and meaning for our community in this way served to:

What does the term "Bla(c)k" represent?

The term “Bla(c)k” on the other hand, represents the histories, cultures and identities of not only First Nations Australians, but also African Australians, African migrants, African diasporic communities, South Sea and Pacific Islanders. However, nationally speaking, the term “Black Australia” generally refers to over 500 Aboriginal and Torres Strait Islander groups and/or nations who collectively self-identify as “Blackfullas/Blackfellas”.

As Traditional Owners of this continent known as “Australia”, our sovereignty was never ceded and continues to exist today. Long story short, Black, Blak and Bla(c)k Australian identities are united through a history of resistance to oppressive colonial powers, and the validity of our Blackness is quite frankly not up for debate. 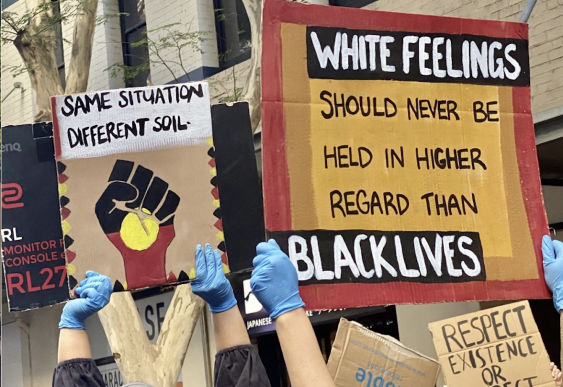 Whether you identify as Black, Blak or Bla(c)k, regardless of where you are situated in the world – at what point did it become normalised to police the racial identity and experience of other people and communities? Haven’t the Australian and American Nation States quite literally done this to death? Both of our histories and current realities are marred by heavy State surveillance and the over-policing of Black identity, movement, language and culture.

Similar to the United States, Black Australia’s engagement with the settler State is also based on a perception of our identity that is rooted in racial oppression. Police brutality, slavery, racism, over-incarceration, economic disadvantage, settler colonialism, poverty, racial capitalism, suicide, intergenerational trauma, white supremacy and cultural genocide are simply not unique to the United States.

It is for these reasons that First Nations Australians strongly connect—both historically and at present—with Black American movements. To cut another long story short, our Black lives matter too. Political Activist, Co-Founder and President of the Black Lives Matter Greater New York City movement, Hawk Newsome recognised this when he declared in 2018 on Gadigal land (Sydney CBD) that “it’s the same story, different soil”.

It is upon this common ground that we as Black peoples must unite. It is time that we stop engaging in what can only be described as the Oppression Olympics. Comparing present and historic traumas, including the number of years under which we have all suffered under colonisation and the settler State is itself a colonial practice rooted in white supremacy, that is neither necessary nor useful because racial oppression is simply that: oppression.

There can be no winner. Despite this, slavery histories in the United States and Australia appear to be a common comparative at the crux of the Black identity debate, and it seems that this too requires clarification in order for us to move forward on our journey toward First Nations sovereignty and Black liberation.

The impact of the Stolen wages era

While Australia was not officially a slave trading State like the United States, slavery practices emerged in the 19th century and existed until the late 1950s, with some First Nations Australians not receiving payment of wages or equal wages until the 1980s – commonly referred to as the Stolen wages era. A “Slave Map of Modern Australia” printed in 1891 by the British Anti-Slavery Reporter, including nation-wide familial and communal accounts further reinforced Australia’s dark history of enslaving First Nations Australians.

To use my own family history as an example, in the 20th century my paternal great grandparents were stripped of their traditional names and forced to adopt the surname of an Italian settler as part of an “employment agreement”, despite never actually receiving a wage. This practice of settler surname adoption for the purpose of “employment” was also mandatorily applied to their subsequent children from birth; that is, my grandfather and his siblings.

Thus, further demonstrating that this was not “employment” but in fact, slavery. And herein lies the dark origins of my Italian surname. Sadly, this story is not unique and is shared by many First Nations Australians who, similar to my family, became enslaved on their own lands for generations. 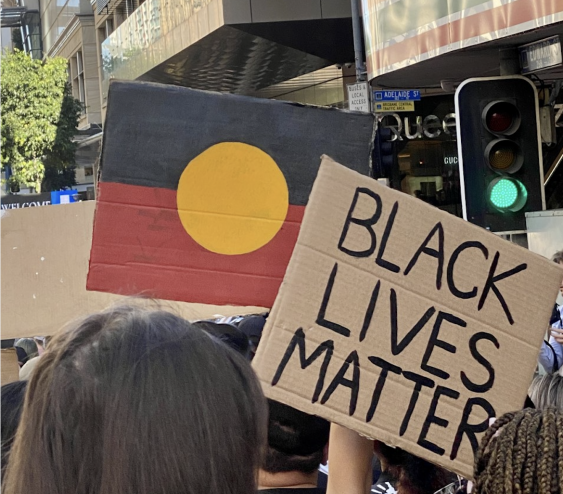 And so, it goes without saying that settler colonialism and white supremacy go hand in hand—they are bedfellows reinforcing one another. Consequently, we cannot dismantle white supremacy without decolonising the settler State and the very systems that uphold it. Black liberation and First Nations sovereignty are inextricably linked and not mutually exclusive.

We, as Aboriginal and Torres Strait Islander people, being both Black and First Nations, breathe life into this connection through our very existence as the oldest surviving culture in the world. An existence which is in itself a resistance to the systems responsible for both of our oppressions.

We are the living embodiment of Black liberation and First Nations sovereignty. Forging a brighter path for future Black generations within the United States, Australia and abroad, will require a unified front that embraces, and does not police this fact. In a world where we are already over-policed, let us refrain from policing one another as this only furthers the cause of our oppressor.

We must begin to recognise that Blackness and Black identity are fluid social constructs influenced and determined by diverse geographical, historical and cultural contexts. Only then will we, as a global Black community, move closer toward true emancipation from the legal, political and social conditions we continue to experience in our daily lives as a result of colonisation and its accompanying oppressive systems.

Now more than ever, we must engage in practices that demonstrate Black lives mattering all over the world because only then will we draw closer to actually dismantling white supremacy. Indeed, this work will not be easy and we may not live to see the results in our lifetime but we owe it to our ancestors, our sacred lands and each other to at least try because in the end, all of our Black lives matter. 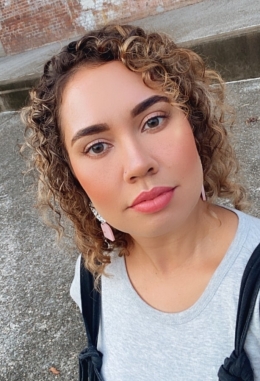 Currently conducting a cross-border PhD study with the United States, Ms Bassani is exploring questions of Indigeneity, sexuality, gender and the law with a focus on the experiences of Indigenous LGBTQI+ 2Spirit, Sistergirl and Brotherboy peoples within their communities and the legal system.