A UNSW analysis has found waters off Sydney, southern NSW and eastern Tasmania are demonstrating an accelerated warming trend. 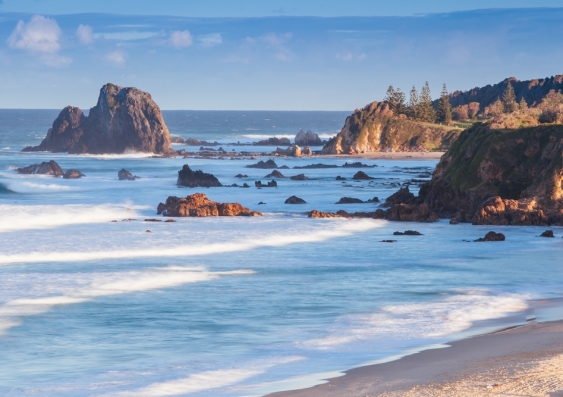 The waters off southern NSW and the east coast of Tasmania are warming twice as fast as waters off northern NSW, and at more than three times the global average, a UNSW study has found.

The study, published in Geophysical Research Letters, analysed how coastal waters adjacent to the Eastern Australian Current (EAC) have warmed over the last 25 years.

Scientists have so far found that parts of western boundary currents such as the EAC, which runs along the east coast of Australia, are warming at two to three times the global average of 0.12 degrees per decade.

This means these waters have warmed about 1.5 degrees on average in the past 30 years.

“What really surprises me is the raw numbers and the effect of climate change, what half a degree per decade actually means for an ecosystem or for an environment in 10 or 20 years,” lead author and Postdoctoral Research Fellow in UNSW Science’s School of Mathematics and Statistics, Dr Neil Malan, says.

“These numbers are accelerating off southern NSW: at times this year the water temperature there was four degrees warmer than normal.

“The fact that the trend is so large, and that it’s more than three times greater than the global average and that Narooma is such a hotspot, is very shocking.” 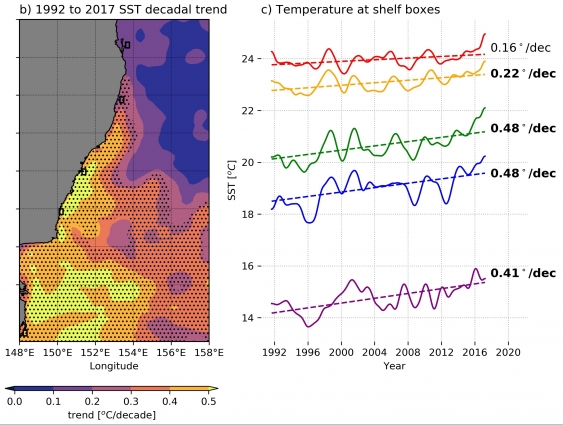 Dr Malan says this ‘tropicalisation of ecosystems’ could have a widespread biological impact.

Referring to a 2016 Macquarie University study, he says it will make life difficult for species such as the penguins of Montague Island.

The study on the foraging efficiency of the penguins found that warmer ocean temperatures affect penguins’ ability to hunt and catch prey.

“Their work seems to show that they avoid the warm water so they swim longer distances to find these lower temperature areas to find food,” he says.

The UNSW study used data from over 10 years of measurements of actual water temperatures from five sites (North Stradbroke Island, Coffs Harbour, Sydney, Narooma and Maria Island); satellite estimates of temperatures and currents and a regional ocean model over the last 22 years.

Dr Malan says fast-flowing western boundary currents, like the EAC, bring the impacts of changes of ocean basin circulation (in this case across the breadth of the south Pacific Ocean) to their coastlines, which are usually highly populated.

The EAC moves warm water down the coast of NSW, but just north of Sydney it branches off towards New Zealand.

At this point it forms large eddies (rotating bodies of warm ocean water) that are carried along SE Australia.

Another UNSW study has showed that the amount of warm water transported south by these eddies is increasing.

Dr Malan says the EAC has some of the strongest currents and eddies in the world.

“Northern NSW water temperatures, while still warming, are more stable as they are not as affected by what is happening offshore. It is southern NSW, where we see an increase in eddy activity, that is warming the fastest,” he says.

Dr Malan says the next areas of research will look at longer trends of coastal warming dating back to the 1950s; studying more coastal sites around Australia; and looking at the link between deep ocean and coastal water temperatures.