Wettest summer in five years - but is La Nina coming to an end?

With more rain on the horizon in NSW and Queensland, a UNSW climate scientist answers our questions about whether we can expect more wet and cold from La Niña, and what’s in store for next summer. 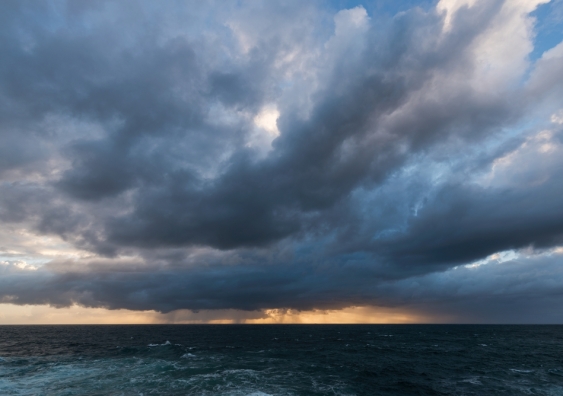 The Bureau of Meteorology says Australia recorded its wettest and coolest summer in at least five years thanks to La Niña. But the wet and cool conditions are not finished yet, with forecasts of heavy rain to Queensland and NSW over the next week.

What can we expect from La Niña in future?

Dr Andrea Taschetto is an Associate Professor and ARC Future Fellow at UNSW Science’s Climate Change Research Centre, as well as a chief investigator at the ARC Centre of Excellence for Climate Extremes.

“This last summer was particularly unusual. We did receive lots of rain. It was the wettest and coolest summer in the past five years and that was basically because of La Niña,” she says.

What is La Niña?

“La Niña events occur when sea surface temperatures of the tropical Pacific, particularly the central and eastern Pacific, gets unusually cold, while the other side of the basin - the Western Pacific which is closer to Australia - gets warmer than average. The warm water near Australia increases moisture to the atmosphere and enhances the chances for more rainfall over northern and eastern Australia.”

“What we are seeing now is actually past the peak of La Niña event and it's slowly fading. We are expecting that La Niña will fade and go back to normal conditions by April/May this year. Without La Niña we expect to receive normal average rainfall in winter, not exaggerated as we've seen during the summer and autumn.” 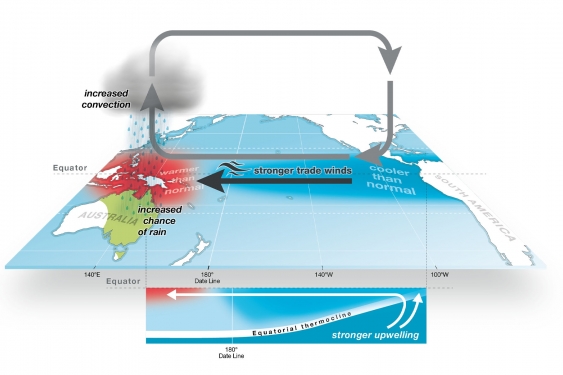 How La Niña is formed. Graphic: Bureau of Meteorology

“La Niña is the cooler phase of a phenomenon called the El Niño-Southern Oscillation (ENSO). The warm phase of ENSO is named El Niño. ENSO is sometimes hard to predict but currently it is possible to predict a La Niña or El Niño nine months in advance. One of the things scientists use to predict La Niña or El Niño is the heat content in the ocean. When the Western Pacific has more heat content than average, then it is more likely that El Niño will develop, and conversely for La Niña.”

What causes the Pacific Ocean to cool during La Niña?

“It is a swing of the so-called Walker circulation in the tropical Pacific. The Walker circulation features trade winds blowing from east to west across the tropical Pacific. This piles up warm water to the western side of the ocean basin, creating a warm pool around the Indonesian seas and off northern Australia. At the same time cold water is upwelled in the east, making the eastern Pacific cool. Surface winds converge in the western Pacific and create lots of convection and rain. When La Niña events occur this Walker circulation gets stronger than normal, so trade winds intensify, making the eastern Pacific cooler, and the water surrounding Australia warmer, favouring more moisture, convection and rainfall for us.”

What makes the oceans warm during El Niño?

“El Niño occurs when this whole circulation weakens. As a consequence, the warm water that is piled up in the west by the winds spreads to the east, thus warming the central and eastern Pacific, and moving the centre of convection eastward. With less warm water around Australia and the convective activity away from the western Pacific, there are more chances for dry weather for Australia.”

What’s the prospect for ENSO next summer?

“La Niña and El Niño generally have a three to seven year cycle so we are not expecting to see another event like this develop at the end of the year. Although La Niña can sometimes persist for two years, seasonal forecasting agencies, such as the Bureau of Meteorology, are predicting neutral conditions for the rest of the year and next summer.

The strong La Niña event of 2010/2011 resulted in massive floods in Queensland. The 2010 spring season was the wettest spring in Australia since the 1900s. We simulated a similar event at the time to check how unusual the 2010/11 La Niña was, and we found the warming ocean surrounding the northern parts of Australia was extremely important for that event. It accentuated the chances of having extreme flooding in northeast Australia. Our simulation showed that north-east Australia was three times more likely to experience extreme rainfall during that La Niña than if there hasn’t been a warming of the ocean north of Australia.  It was global warming making an appearance on top of La Niña.” 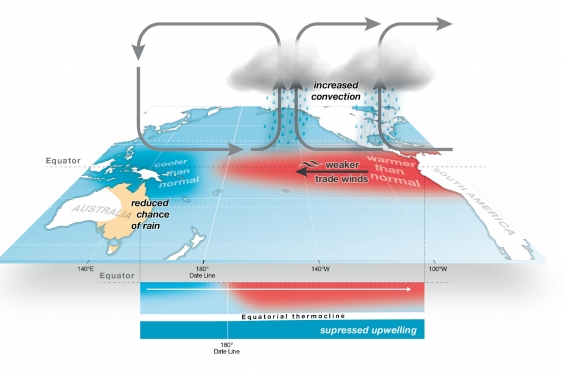 How El Nino is formed. Graphic: Bureau of Meteorology.

What are the impacts of La Niña?

“The tropical Pacific covers about one third of the tropics, so when ENSO appears it is large enough to impact weather patterns beyond that ocean. It is also often the case that ENSO can combine with other climate phenomena to amplify the impact over Australia. For example, when the east Indian Ocean is warmer than usual at the same time as La Niña, it intensifies rain for south-east Australia. When the Antarctic Oscillation shifts the mid-latitude winds closer to Australia, it can bring more storms and rain to south and east Australia.

Generally during La Niña, there tends to be a higher chance of tropical cyclones around Australian tropics. That didn't happen this year; there were only three or four tropical cyclones this season. But there were a lot of tropical lows, which are less intense weather systems that can bring significant amounts of rain for northern Australia, and that's what happened this season.

Another effect of La Niña around Australia is marine heatwaves. Marine heatwaves are extreme ocean temperature events that persist for several days, sometimes months, and can develop due to La Niña in areas like the Ningaloo Reef in Western Australia. These events have massive impact for marine ecosystems, and coastal communities dependant on economic activities such as fishery and oyster farmers.

The impacts of La Nina and El Nino reverberate across the globe. We recently synthesised these complex effects as part of the book El Nino Southern Oscillation in a Changing Climate.”

Are there any positive aspects to La Niña?

“About three years ago, south-east Australia experienced a severe drought. The Murray Darling basin catchment area was very low. The amount of rainfall that La Niña brought this time contributed to bringing the Murray Darling basin and soil moisture back to normal. Overall, we need to think that ENSO is not a bad thing, but a natural oscillation of our climate system. It will continue to appear in the future, although research shows that it will likely appear more often in a warming climate.”