What is a one-in-100 year weather event? And why do they keep happening so often?

In any given year, there's a 1% chance of a 'once in a century' flood. But that doesn't mean they can't happen more than once in quick succession. 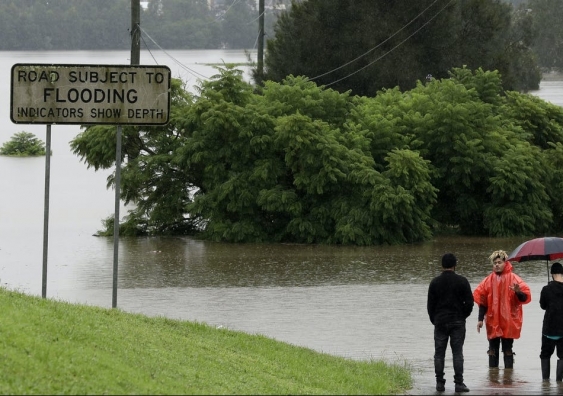 People living on the east coast of Australia have been experiencing a rare meteorological event. Record-breaking rainfall in some regions, and very heavy and sustained rainfall in others, has led to significant flooding.

First, let’s clear up a common misunderstanding about what a one-in-100 year event means. It does not mean the event will occur exactly once every 100 years, or that it will not happen again for another 100 years.

For meteorologists, the one-in-100 year event is an event of a size that will be equalled or exceeded on average once every 100 years. This means that over a period of 1000 years you would expect the one-in-100 year event would be equalled or exceeded 10 times. But several of those 10 times might happen within a few years of each other, and then none for a long time afterwards.

Ideally, we would avoid using the phrase “one-in-100 year event” because of this common misunderstanding, but the term is so widespread now it is hard to change. Another way to think about what a one-in-100 year event means is that there is a 1% chance of an event of at least that size in any given year. (This is known as an “annual exceedance probability”.)

How common are one-in-100 year events?

Many people are surprised by the feeling that one-in-100 year events seem to happen much more often than they might expect. Although a 1% probability might sound pretty rare and unlikely, it is actually more common than you might think. There are two reasons for this.

In much the same way, you might have a one in a million chance of winning the lottery, but the chance someone wins the lottery is obviously much higher.

Second, while a one-in-100 year flood event might have a 1% chance of occurring in a given year (hence it’s referred to as a “1% flood”), the chance is much higher when looking at longer time periods. For example, if you have a house designed to withstand a 1% flood, this means over the course of 70 years there’s a roughly 50% chance the house would be flooded at some point during this time! Not the best odds.

How well do we know how often flood events occur?

Incidents like these 1% annual exceedance probability events are often referred to as “flood planning levels” or “design events”, because they are commonly used for a range of urban planning and engineering design applications. Yet this presupposes we can work out exactly what the 1% event is, which sounds simpler than it is in practice.

First of all, we use historical data to estimate the one-in-100 year event, but Australia has only about 100 years of reliable meteorological observations, and even shorter records of river flow in most locations. We know for sure this 100-year record does not contain the largest possible events that could occur in terms of rainfall, drought, flood and so on. We have data from indirect paleoclimate evidence pointing to much larger events in the past.

So a 1% event is by no means a “worst case” scenario, and some of the evidence from paleoclimate data suggests the climate has been very different in the deep past.

Second, estimating the one-in-100 year event using historical data assumes the underlying conditions are not changing. But in many parts of the world, we know rainfall and streamflow are changing, leading to a changing risk of flooding.

Moreover, even if there was no change in rainfall, changes to flood risk can occur due to a host of other factors. Increased flood risk can result from land clearing or other changes in the vegetation in a catchment, or changes in catchment management.

Increased occurrence of flooding can also be associated with poor planning decisions that locate settlements on floodplains. This means a one-in-100 year event estimated from past observations could under- or indeed overestimate current flood risk.

A third culprit for influencing how often a flood occurs is climate change. Global warming is unquestionably heating the oceans and the atmosphere and intensifying the hydrological cycle. The atmosphere can hold more water in a warmer world, so we would expect to see rainfall intensities increasing.

Extreme rainfall events are becoming more extreme across parts of Australia. This is consistent with theory, which suggests we will see roughly a 7% increase in rainfall per degree of global warming.

Australia has warmed on average by almost 1.5℃, implying about 10% more intense rainfall. While 10% might not sound too dramatic, if a city or dam is designed to cope with 100mm of rain and it is hit with 110mm, it can be the difference between just lots of rain and a flooded house.

So what does this mean in practice?

Whether climate change “caused” the current extreme rainfall over coastal New South Wales is difficult to say. But it is clear that with temperatures and heavy rainfall events becoming more extreme with global warming, we are likely to experience one-in-100 year events more often.

We should not assume the events currently unfolding will not happen again for another 100 years. It’s best to prepare for the possibility it will happen again very soon.