Endangered wallaby population bounces back after ferals fenced out

UNSW scientists have used a new conservation strategy to give the bridled nailtail wallaby a head start in life. 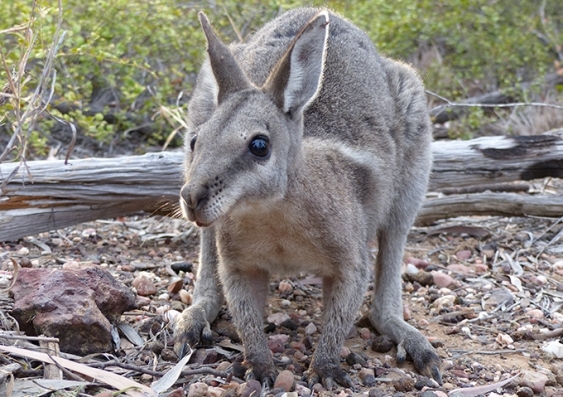 A population of bridled nailtail wallabies in Queensland has been brought back from the brink of extinction after conservation scientists led by UNSW Sydney successfully trialled an intervention technique never before used on land-based mammals.

Using a method known as ‘headstarting’, the researchers rounded up bridled nailtail wallabies under a certain size and placed them within a protected area where they could live until adulthood without the threat of their main predators – feral cats – before being released back into the wild.

In an article published today in Current Biology, the scientists describe how they decided on the strategy to protect only the juvenile wallabies from feral cats in Avocet Nature Refuge, south of Emerald in central Queensland, where they numbered just 16 in 2015. 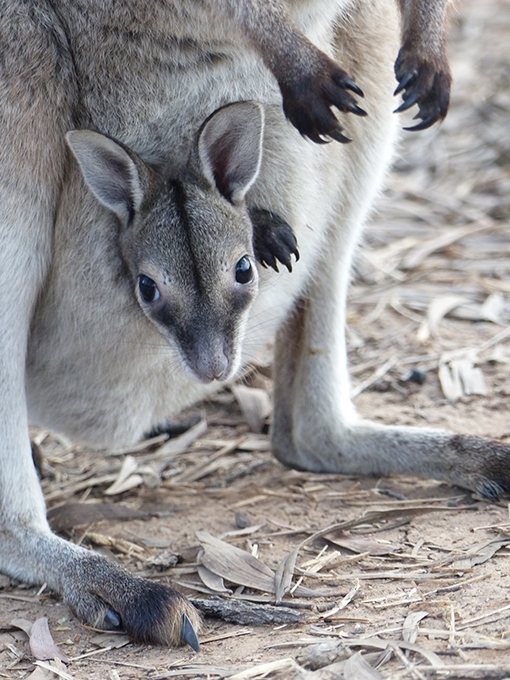 A bridled nailtail wallaby joey is vulnerable until it grows from 'football size' to 'medicine ball' size. Photo: Alexandra Ross/UNSW

“Previous studies have shown that more than half of these young bridled nailtail wallabies were killed by feral cats before they could reach adulthood,” Ms Ross says.

“But when you look at the numbers of adults, the survival rate goes up to 80 per cent – which shows that size is a good predictor of survival.

“So we figured if we can just get them through that tough period – when they’re still little and an easy size for a cat to prey on – by putting them in feral-free protected areas, then we could make a positive difference to the population numbers.”

The results more than confirmed the scientists’ hunches. Of the 56 bridled nailtail wallabies that were raised within the headstart enclosure between 2015 and 2018, 89 per cent survived to be large enough to be let back into the wild. The 11 per cent that didn’t make it included one that needed to be euthanised due to injury, two found dead from accidents or unknown causes and four killed by birds of prey. 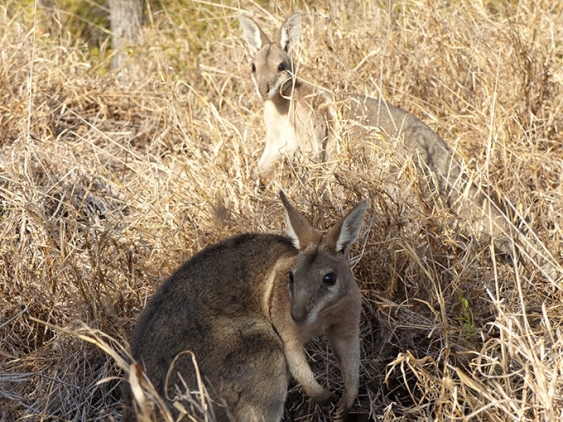 Headstarting the juvenile wallabies has ensured that the Avocet population more than doubled in three years. Photo: Alexandra Ross/UNSW 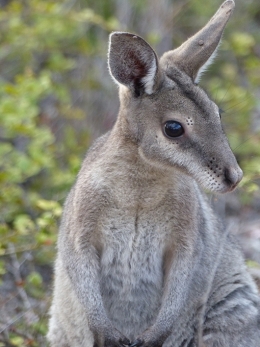 From 1937 until 1973, the bridled nailtail wallaby was thought to be extinct after being hunted extensively for fur and preyed upon by feral animals. Photo: Alexandra Ross/UNSW

Professor Mike Letnic, a co-author on the article, says headstarting is a cost-effective intervention when compared to other more complex strategies involving the creation of large nature reserves after complete eradication of feral animals, like the one created in Sturt National Park in 2019.

“Aly’s [Ms Ross’s] headstarting project involved fencing off an area about 10 hectares which was big enough to hold about 30 or 40 wallabies at a time,” Prof. Letnic says.

“We’re basically growing them from football size to medicine ball size before releasing them back into the wild, which can take anywhere from a few months to a year.

“For the most part they’re fending for themselves in the headstart exclosure just like they do in the wild, except without the threat of feral animals. But they’re not completely protected – they can still get eaten by eagles which means there is still some predator recognition.”

Ms Ross says the population of the bridled nailtail wallabies more than doubled following the three years of headstarting in Avocet Nature Refuge, which is the largest increase that had been observed in this particular population since monitoring began in 2011.

“Before we started the headstarting strategy, we estimated the core Avocet population at 16 individuals. When we did a recount in 2018 after three years of gradually releasing headstarted wallabies that had reached the right size, the estimate of the total population of bridled nailtail wallabies – both inside and outside the headstarting exclosure – was 47.

“This clearly demonstrates the effectiveness of the headstart exclosure as a conservation strategy.”

The bridled nailtail wallaby is a small macropod that grows up to a metre in length, half of which is the tail. It takes its name from the white ‘bridle’ line that runs down the back of the neck and shoulders and a tail spur about 3 to 6mm in length.

Bridled nailtail wallabies live mostly on succulent grasses, can grow to a weight of 8kg, with an average life-span of around six years in the wild.

Once the most common macropods at the time of European settlement, these nocturnal animals are now in critically low numbers in the wild after being hunted extensively for their fur in the early 1900s, and more recently, preyed upon by feral cats and foxes.

The species was even believed extinct from 1937 until 1973. It was only when a fencing contractor reported he’d seen a population of the wallabies living on a property near Dingo, Queensland – after reading about it in an article published in Woman’s Day – that the species was rediscovered.

After the Queensland Parks and Wildlife Service confirmed its existence, the property near Dingo eventually became a nature reserve to ensure its ongoing survival.

There are believed to be only 500 of the animals living in the wild, and more than 2000 in captivity.

Worryingly, when Ms Ross and her fellow researchers crunched the numbers on how the population would fare without, or with varying lengths of headstarting scenarios – none, five years, 10 years, 20 years and 50 years – the projections found that extinction resulted once headstarting ceased – within a timeframe of two to 52 years.

“What this tells us is that until we find a way to eliminate feral cats in the wild, headstarting may be the only way to keep this population at a sustainable level.”

But the team’s implementation of the first headstarting project for a land-based mammal raises new hope for other potential endangered species in Australia – and potentially around the globe – where size of young may be factor in population survival.

“One of the great things about headstarting is it’s relatively cheap, doesn’t interfere too much with animals’ awareness of predators, and can get good results in a short time,” Ms Ross says.

“And there are plenty of other mammal species around the world that could benefit. Any species that is particularly vulnerable in the early life stage could potentially thrive under a headstarting strategy.”

Up until now, headstarting has been used with some success with birds, fish, reptiles, and seals, and there’s no reason why it shouldn’t also be implemented for terrestrial mammals, Ms Ross and Prof. Letnic argue.

Prof Letnic says one of the drawbacks with separating animals for longer periods in feral-free enclosures is that they unlearn their fear of predators on the outside.

“After only a few years of being in a protected zone, evolution kicks in and animals start developing new ways to compete with one another. They tend to become bolder in an attempt to be first to the food. If they were then to be released back into the wild among feral animals, the bold ones end up getting eaten because they’ve lost that cautious awareness of predators.”

However, Ms Ross believes that headstarting could avoid this problem, as animals are only separated from predators for a few months or a year at the most. There is also minimal human interaction and the animals are still preyed upon by their natural predators, like eagles and snakes, ensuring they retain some predator awareness.

Her next study will examine the behaviour of the bridled nailtail wallabies once released from the headstarting exclosure and the length of time it took for them to fully integrate back into the wild. 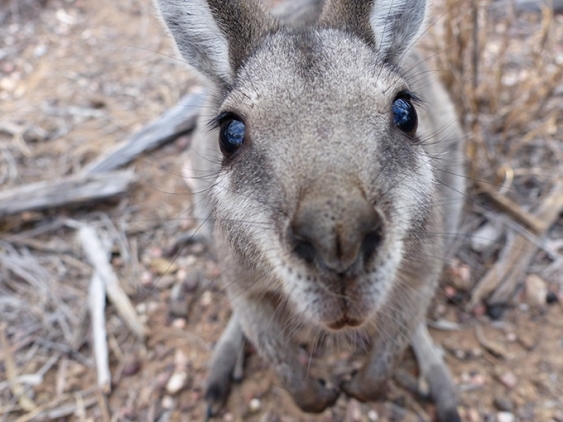 The bridled nailtail wallaby was once the most common macropod on the Australian continent before European settlement. Now there are only 500 living in the wild. Photo: Alexandra Ross/UNSW