One cold winter doesn't negate more than a century of global warming. We need the political leadership to set the world on a safer path. Ill-informed tweets by government senators won't help. 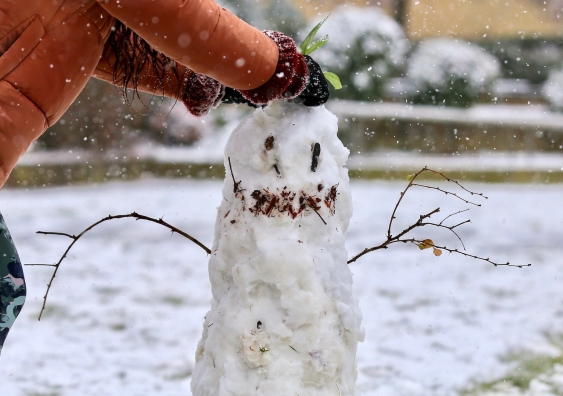 Canavan, a renowned opponent of climate action and proponent of the coal industry, appeared to be suggesting that the existence of an isolated cold snap means global warming isn’t real.

Prime Minister Scott Morrison has previously insisted there is “no dispute in this country about the issue of climate change, globally, and its effect on global weather patterns”. But Canavan’s tweet would suggest otherwise.

The reality is, as the climate warms, record-breaking cold weather is becoming less common. And one winter storm does not negate more than a century of human-caused global warming. Here, we take a closer look at the cold weather misconception and two other common climate change myths.

Canavan’s tweet is an example of a common tactic used by climate change deniers that deliberately conflates weather and climate.

Parts of Australia are currently in the grip of a cold snap as icy air from Antarctica is funnelled up over the eastern states. This is part of a normal weather system, and is temporary.

Climate, on the other hand, refers to weather conditions over a much longer period, such as several decades. And as our climate warms, the probability of such weather systems bringing record-breaking cold temperatures reduces dramatically. 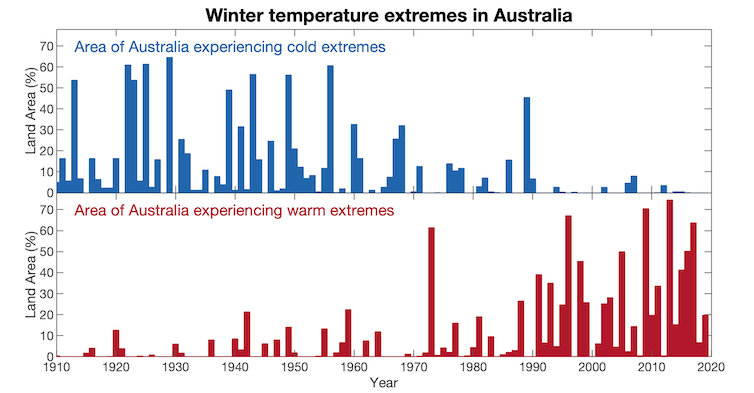 Percentage of Australia experiencing extreme cold (bottom 10%) and extreme warmth (top 10%) in winter since 1910. Data from the Bureau of Meteorology.

Myth #2: Global warming is good for us

But the perverse benefits that may flow from climate change will be far outweighed by the damage caused.

Extreme heat can be fatal for humans. And a global study found 37% of heat-related deaths are a direct consequence of human-caused climate change. That means nearly 3,000 deaths in Brisbane, Sydney and Melbourne between 1991 and 2018 were due to climate change.

Extreme heat and humidity may make some parts of the world, especially those near the Equator, essentially uninhabitable by the end of this century.

Global warming also kills plants, animals and ecosystems. In 2018, an estimated one-third of Australia’s spectacled flying foxes died when temperatures around Cairns reached 42℃. And there is evidence many Australian plants will not cope well in a warmer world – and are already nearing their tipping point.

In January last year, News Corp columnist Andrew Bolt caused a stir with an article that suggested rising carbon dioxide (CO₂) emissions were “greening the planet” and were therefore “a good thing”.

During photosynthesis, plants absorb CO₂. So as the concentration of CO₂ in the atmosphere increases, some researchers predict the planet will become greener and crop yields will increase.

Rising temperatures lead to an earlier onset of spring, as well as prolonged summer plant growth – particularly in the Northern Hemisphere. Researchers think this has triggered an increase in the land carbon sink.

However, there’s also widespread evidence some trees are not growing as might be expected given the increased CO₂ levels in our atmosphere. For example, a study of how Australian eucalypts might respond to future CO₂ concentrations has so far found no increase in growth.

Increased plant growth may also cause them to use more water, causing significant reductions in streamflow that will compound water availability issues in dry regions.

Overall, attempts to reconcile the various lines of evidence of how climate change will alter Earth’s land vegetation have proved challenging.

So, are we doomed?

After all this bad news, you might be feeling a bit dejected. And true, the current outlook isn’t great.

Earth has already warmed by about 1℃, and current policies have the world on track for at least 3℃ warming this century. But there is still reason for hope. While every extra bit of warming matters, so too does every action to reduce greenhouse gas emissions.

And there are promising signs of increasing ambition to reduce greenhouse gas emissions on the global front – from the United States, the United Kingdom, the European Union, Japan and others.

Unfortunately, Australia is far behind our international peers, instead pushing the burden of action onto future generations. We now need the political leadership to set our country, and the world, on a safer and more secure path. Ill-informed tweets by senior members of the government only set back the cause.

Read more: Spot the difference: as world leaders rose to the occasion at the Biden climate summit, Morrison faltered