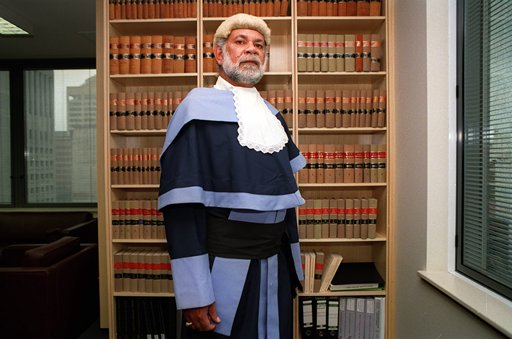 In 2014, a group of UNSW Law alumni, inspired by the realisation of how fundamental their time at Law School had been to their success, agreed to jointly establish the Judge Bob Bellear Memorial Scholarship.

Graduates from the 1980s and 90s, the friends were by then working in a broad range of roles, from film and television, to broadsheet media and sport, as well as legal practice. A decade or two into their careers, they had reached a point where they could see and reflect on the professional, social and financial benefits afforded to them by their UNSW education.

But they were also aware that those benefits were significantly less accessible to talented young First Nations students with aspirations to study law. The Law Society of New South Wales’ 2018 National Profile of Solicitors indicated that less than 0.7 per cent of all solicitors identify as Aboriginal or Torres Strait Islander, despite that group making up 2.8 per cent of the total population. This reflects a declining trend over earlier figures.

In response to this need, and in acknowledgement of their own good fortune, the friends resolved to establish a scholarship in support of First Nations law students, named in honour of Judge Bob Bellear, a UNSW Law graduate and Australia’s first Indigenous judge.

Rebecca Gilsenan and Nina Walton were the instigators of the initiative. After conversations with then Dean, Professor David Dixon, they rallied the group of 11 friends to commit to a small annual contribution, on an ongoing basis. The accumulated funds would support a five-year residential scholarship for a promising young student, relieving them of financial stress, providing them with a supportive environment, and giving them every opportunity to focus on their studies for the duration of their degree. This opportunity is delivered in partnership with the established Shalom Gamarada Scholarship Program at Shalom College. Since the inception of the Shalom Gamarada initiative in January 2005, 47 Indiengous students have graduated, including 23 Indigenous doctors and 10 lawyers.

“It’s really designed to create a stable base from which a student can go on and achieve academically, and in their future career,” says Dr Nina Walton, one of the scholarship contributors and a friend of Rebecca’s since their first day on campus in 1992. “Law School is a hard-driving environment. To come into that environment without having come from that background, without knowing other lawyers, without having other people in your family who have had that experience, as well as having to support yourself financially – it would be almost impossible.”

Wiradjuri woman, Jenavive Westbury was the inaugural recipient of the scholarship. Jenavive had been struggling to keep afloat financially, living in a series of temporary homes, her possessions, including schoolbooks, frustratingly dispersed across the houses and college rooms of friends.

“Coping with everything that was going on in my life was my day-to-day job; university was just something I was doing on the side,” she says. “It really was a big sense of relief when I got the scholarship. When I was unpacking my things in my room at Shalom College, I thought: now I can stop stressing and just have a place of my own.”

Jenavive made the most of her newfound home and stability, excelling in her studies and supporting other First Nations students as a tutor in the UNSW Nura Gili Centre for Indigenous Programs. It was an instinct aligned with that of Judge Bellear himself, who acted as a mentor to numerous young lawyers and regularly encouraged high school and university students to join him in the courtroom during his years as a NSW District Court Judge.

Jenavive was succeeded as Bob Bellear scholar by Gamilaraay man, Daniel Thompson. Being able to call Shalom College his home for the duration of his degree was critical to Daniel’s capacity to accept his offer to study at the Faculty of Law & Justice.

“There are so many barriers for Aboriginal students that are impossible to overcome by hard work and support alone” says Daniel. “I worked so hard, and I had all the support I could ever imagine, and yet I wouldn’t have been here without this help.”

The financial support provided by the scholarship has made it possible for Daniel to work as an intern at the Aboriginal Legal Service (ALS).

“In under three years I’ve already been able to do the work I dreamed of doing for so long. I’ve written law reform submissions. I’ve done aboriginal employment strategies to get more black lawyers into the ALS. I’ve provided an Aboriginal voice in a white-dominated space.”

Inspired by these examples an endowed residential scholarship in memory of Judge Bob Bellear has been established to be one of three scholarships featured during the Law & Justice 50th celebrations in 2021. This will enable others to join in the generous support and vision of the initial group of alumni who established this scholarship and for the opportunity it offers to be provided in perpetuity.

You can donate to this scholarship here: Bob Bellear Endowed Residential Scholarship: https://alumni.unsw.edu.au/page.aspx?pid=1598&fnd=1210