The Governor of the Reserve Bank of Australia, a debut novelist, and the co-founders of Shippit, the fastest-growing shipping platform in Asia Pacific, are some of the UNSW alumni recognised this year. 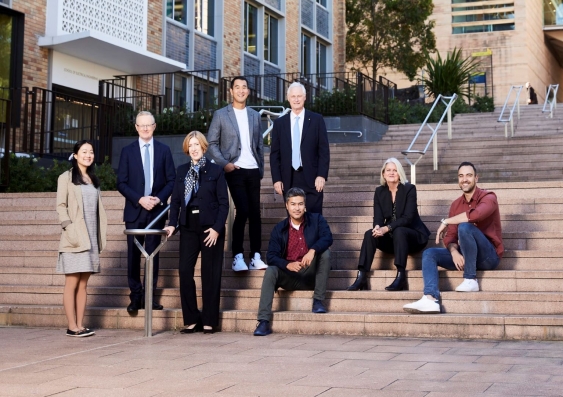 UNSW Sydney today announced its 2021 Alumni Award winners. The awards celebrate the achievements of UNSW alumni with established careers and those at the beginning of their career journey.

UNSW alumni from an array of backgrounds and disciplines were nominated for the 2021 UNSW Alumni Awards. Of the 145 nominations, eight distinguished alumni received awards.

UNSW Chancellor, David Gonski AC said: “Every year I look forward to being part of these awards and recognising alumni who have achieved excellence in their chosen field. The alumni honoured this year made an outstanding contribution to our society across a wide range of fields, including government, business, the arts and literature, medicine and not-for-profit organisations.”

UNSW President and Vice-Chancellor, Professor Ian Jacobs said: “The diversity of careers our alumni pursue and the heights they achieve is impressive. Their fine example stands as inspiration for UNSW students, present and future, to have a positive impact in their local community and around the world.”

Dr Lowe is Governor of the Reserve Bank of Australia (RBA). He received a Bachelor of Commerce (Hons) from UNSW in 1985.

Talking about his time at UNSW Dr Lowe said: “I was a pretty diligent student. I think the only time I was late to class was when the bus was delayed!”

“I went to UNSW at night-time for two years, three nights a week: Tuesdays, Wednesdays and Thursdays. I’d go into the Reserve Bank during the day, and I was fortunate enough to do well enough over those two years for the Reserve Bank to give me a scholarship to finish my degree.”

He has authored numerous papers, including on the linkages between monetary policy and financial stability.

“As an organisation, we [the RBA] flourish on ideas. I think the best environment for the generation of ideas is when you’ve got people from different perspectives – so not just all men from one background, not women from one background, but just a diversity of people. We’ve been able to build that at the Reserve Bank and I think if we’ve got different perspectives then we’re going to be able to come up with better ideas and ultimately better policies,” Dr Lowe said.

Mr Ali is an acclaimed artist across various media, including painting. He graduated with a Master of Fine Arts at UNSW in 2015.

“I never imagined that I would receive this award… It is one of my proudest moments,” Mr Ali said.

He was commissioned in 2017 by the Museum of Contemporary Art in Sydney to create a mural for its Circular Quay foyer. The large-scale work contains characters inspired by the Shahnama alongside elements inspired by illustrations that ghost the pages of the Australian passport. Mr Ali received his Australian passport in 2015, five years after he relocated to the country.

Mr Ali has a studio in Kabul, Afghanistan, where he works with teams of traditional carpet weavers – often teaching them new digital techniques to accommodate his complex designs – to produce rugs as artworks.

“My art grew here in Australia. The amount of support [I’ve received from] funds, grants, studios and from the community, museums and institutions has been phenomenal,” Mr Ali said.

Brigadier Creagh is an experienced chair, non-executive director and strategic adviser. She graduated with a Diploma in Management Studies in 1995 and Masters in Defence Studies in 1997 from UNSW Canberra.

On receiving the UNSW 2021 Young Alumni Award, Brigadier Creagh said: “It’s really humbling to win this award. To be honest I was taken by surprise. I just do what I find important and what I enjoy doing. It’s such an amazing thing to receive from UNSW.”

Brigadier Creagh has achieved significant success throughout her long, multifaceted career, spanning across the military, government, private and sporting sectors. She was named as the 2021 ACT Australian of the Year for her work as an outstanding defence ambassador and in 2020 received a Member of the Order of Australia for her work in the military and significant service to veterans and their families, and rowing.

After a 30-year career in the Australian Army, Brigadier Creagh retired from the military in 2015. She commenced her military career as part of the first co-education officer training class at officer cadet training school in Portsea and was promoted to the rank of Brigadier in 2010. At that time, she was one of only 14 women in the Australian Army to reach this rank. She left the Army as one of Australia’s most decorated female officers.

“The thing that I would say to anyone who is starting out in their careers, is that you’re always going to be faced with challenges. Nothing ever runs smoothly; life will deal you hands you don’t expect,” Brigadier Creagh said.

Dr Goldie is CEO of Australian Council of Social Service (ACOSS), the peak body for the community sector, and Adjunct Professor at UNSW Sydney. She graduated with a Bachelor of Law and received a PhD from UNSW in 2008.

“Doing a PhD is a long haul. I’m a night person so I’d often be at the UNSW at night and then I’d work through to the early hours of the morning, sometimes almost four o’clock in the morning. I used to sneak my little puppy dog in, Yogi!” Dr Goldie said.

Dr Goldie has extensively represented the interests of disadvantaged people on the national and international stage, as well as in grassroots communities. She has held senior roles with the Australian Human Rights Commission, Darwin Community Legal Service and Legal Aid in Western Australia.

She has also been recognised as an Inaugural Westpac/AFR 100 Women of Influence, an outstanding lesbian, gay, bisexual, transgender and intersex (LGBTI) executive by Deloitte and again voted one of the most influential people in the Australian social sector in Pro Bono’s Impact 25 Awards 2021.

“I grew up in a family with my dad, who was a Second World War veteran and I think that because I was so early exposed to the best and worst of what human beings are capable of doing to each other, I always felt driven to look out for people who were in trouble,” Dr Goldie said.

Mr Rob Hango-Zada and Mr Will On

Mr Hango-Zada and Mr On are Co-Founders and Joint CEOs of online retail shipping platform, Shippit. They both graduated with a Bachelor of Science from UNSW in 2007.

“I think it’s a massive privilege to even be considered into this group of alumni… who have won these awards,” Mr On said.

Mr Hango-Zada said, “I guess you’re the sum of all your experiences and I wouldn’t be sitting here today without the influence of our parents. We both come from migrant families and seeing the heartache and turmoil they had to go through [in comparison to] the privileged position that we had to go through university, is extremely humbling”.

The co-founders’ frustration with online shopping drove them to create a solution that would enhance the retail shopping experience for customers. Their company, Shippit, now powers delivery for leading retailers such as General Pants, Cue Clothing, Sephora and The Athlete’s Foot. It has recently expanded into south-east Asia and currently handles over 50 million shipments annually.

“We’ve connected retailers to a suite of courier companies, and we’re the secret sauce that sits in-between to basically pick the right courier companies for the job and handle all of the communications to the end customers. [We] help the retailer own the experience of the delivery from cart to doorstep,” Mr Hango-Zada said.

Prof. Talley is Pro Vice-Chancellor, Global Research at the University of Newcastle. He graduated with a Doctor of Medicine at UNSW in 1993.

“It’s a wonderful feeling to have won the award. Being recognised by your university where you went to medical school, my alumnus, is the highest honour I can think of. It’s just spectacular! This is the most important award I can think of,” Prof. Talley said.

A gastroenterologist with a special interest in neurogastroenterology, inflammation and infection, Prof. Talley is considered an international authority in the field. His research covers the local and systemic effects of low-grade inflammation in the gut, the role of the gut micro-organisms and the gut-brain axis.

Prof. Talley has been a member of the Rome Foundation Board for 17 years (the authority in the classification of all the functional gastrointestinal disorders). He is former editor of major journals in the field (Alimentary Pharmacology and Therapeutics and American Journal of Gastroenterology), is editor-in-chief of the Medical Journal of Australia and has been principal investigator on an extensive portfolio of research.

“My proudest achievement is training others; seeing people you’ve trained progress in their careers and become professors themselves. The training of others is really part of what we must do and it’s an extension of the kind of work one does oneself,” Prof. Talley said.

Ms Tu is a journalist and an award-winning writer and poet. She graduated with a Bachelor of Music and Bachelor of Education at UNSW in 2010.

Ms Tu trained as a classical violinist for more than 15 years. Her first book of poetry, You Should Have Told Me We Have Nothing Left, was published in 2018 and her first novel, A Lonely Girl is a Dangerous Thing, was published last year. She currently works as a journalist at Women’s Agenda and is a book critic for The Sydney Morning Herald.

“A Lonely Girl is a Dangerous Thing was loosely based on my own experience as a musician and wanting to see narratives that centred on an Asian woman, which is something I didn’t see growing up. It was important to write a story where other Asian women can be seen and centred,” Ms Tu said.

“It’s so important that people see themselves in whatever entertainment they consume because it helps you see the importance of your own existence in the world.”