Gamblers bet more when in the dark: feedback can curb their online losses

How to inject more reality into gamblers’ overestimation of their chances of winning? One simple tool is feedback. 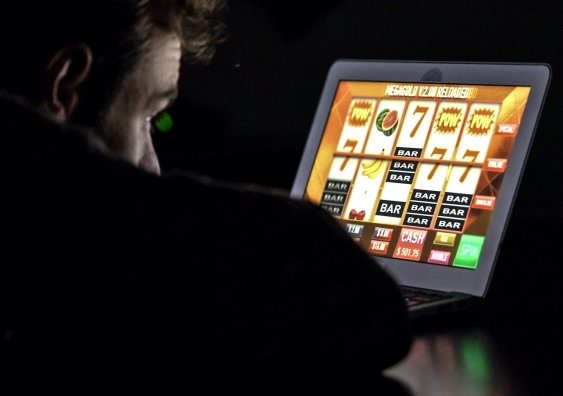 Online wagering is the fastest-growing segment of gambling in Australia. It’s a trend of particular concern because losing money through online brokering and betting apps is associated with higher rates of gambling-related harm than other types of gambling.

These apps provide the ability to win and lose money anywhere, anytime — and their popularity has been exacerbated by COVID-19 lockdowns.

A survey of 2,000 gamblers by the Australian Gambling Research Centre in mid-2020 found the proportion of gamblers doing so four or more times a week increased from 23% to 32%. Among the biggest online gamblers — men aged 18 to 34 — median spending climbed from $687 to A$1075 a month.

Whether in life, the stock market or at the horse races, most of us are notoriously bad at assessing the real odds of good or bad things happening.

For example, we fear dying in a plane crash (the odds of which are so small the US National Safety Council doesn’t even provide a calculation) far more than a car crash (a lifetime chance of about 1 in 107).

Gamblers underestimate their chance of losing and overestimate the odds of winning. This is despite the odds in games they are playing being precisely calibrated to ensure the house always wins in the long run. As Nassim Nicholas Taleb puts it in his book Fooled by Randomness, it is “not about the odds, but about the belief in the existence of an alternative outcome, cause, or motive”.

How to inject more reality into these beliefs? One simple tool is feedback.

Feedback is crucial for all learning. When it’s timely, clear and targeted, it can alleviate many of the cognitive biases that cloud decision-making.

For gamblers the biggest bias is that they remember their wins more than losses — known as selective recall.

Feedback that clearly shows them their losses can counteract this. This is, no doubt, why many online wagering service providers don’t give feedback to their customers at all. Those that do tend to use “activity statements” that present a long list of transactions that are often hard to navigate and so don’t help gamblers appreciate just how well — or more likely poorly — they are doing.

Making gaming companies provide such feedback in a clear, comprehensible form is something that policy makers should put high on their reform list.

How to improve feedback

To find the best solution to this problem, the federal Department of Social Services commissioned the Australian government’s Behavioural Economics Team (BETA) to trial feedback online gamblers get from their wagering activities. We provided advice on the trial’s design and implementation.

The trial tested ways to let consumers see at a glance how much they had spent, won, lost and their overall net profit or loss from their bets. These numbers were displayed in an “activity statement”, presented in two formats — one as a table, similar to a bank statement, the other using more graphic elements. Below shows the design of the graphic statement. 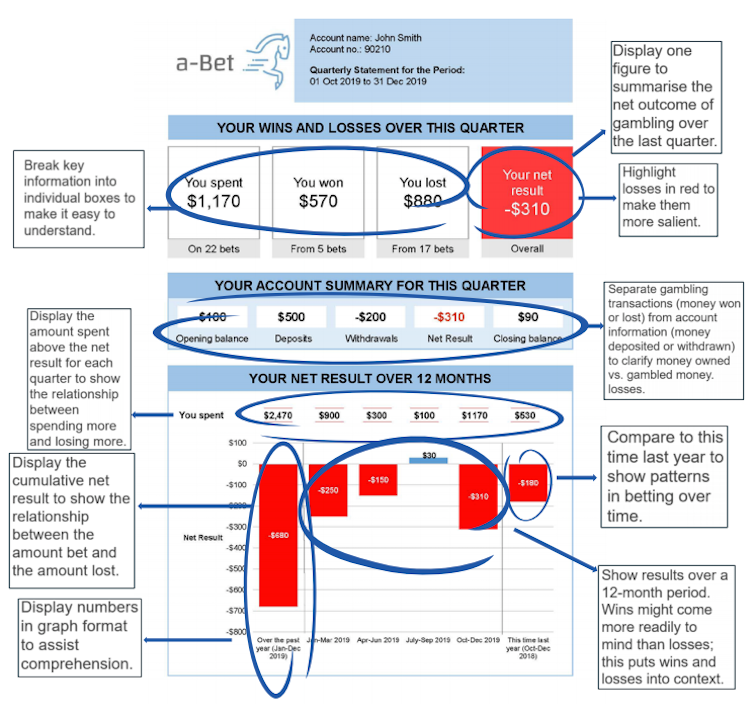 Design elements in the ‘graphic’ activity statement. Behavioural Economics Team of the Australian Government, CC BY

BETA tested these statements in an experiment involving about 1,500 participants in a virtual horse-race betting game.

Each participant was given “lab dollars” (rather than real money) to bet on a series of races in blocks. Some were randomly chosen to get one or other of the activity statements after each block of races. Others received no statement.

These reductions may seem relatively minor but they are still promising. The majority of participants said they would use a summary statement like the ones in the experiment if they were available on real apps. Results also suggested participants with poor financial literacy benefited the most from receiving the feedback statements.

Whether the same results would be achieved in real life is hard to say. Though many participants rated the experiment as at least somewhat like real-life gambling, there are certainly differences between experimental trials and actual online wagering apps, where there can be higher stakes and longer gambling times. This might lead to larger or smaller effects. To answer that will require real-world trials on real apps.

But such trials are definitely worth a shot.

With the right kind of feedback to help us learn, our decisions can improve. The simple summary activity statements in the BETA trial make us optimistic that even in the potentially damaging world of online wagering people can learn to make more informed choices.