How extensive were the adverse health effects of bushfire smoke in the summer of 2019/20?

A UNSW survey has explored the links between bushfire smoke and adverse health effects. 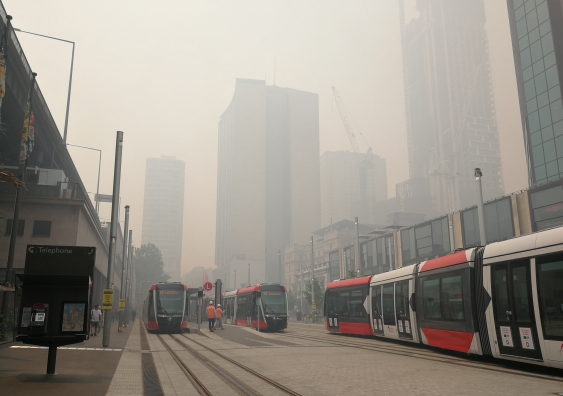 At least 15 per cent of people in bushfire-affected areas of Australia reported experiencing adverse health effects during the severe summer bushfires of 2019-2020, according to a survey of over 1000 people conducted by researchers from UNSW Sydney’s Kirby Institute and the Woolcock Institute of Medical Research. The results of the study were published today in The American Journal of Respiratory and Critical Care Medicine.

The 2019-2020 bushfire season was unprecedented, with over 400 excess deaths and over 3000 additional hospitalisations attributed to the severe fire season. Over 70 per cent of people surveyed reported exposure to bushfire smoke in the summer of 2019/2020.

Due to the impacts of climate change, longer and hotter summers are predicted in the future, and the health risks of severe bushfire seasons will become greater.

The research team wanted to understand the health effects associated with bushfire smoke for people with and without existing lung diseases.

The study found that smoke exposure was significantly linked to adverse health effects among people with pre-existing respiratory conditions, such as asthma and chronic obstructive pulmonary disease (COPD), but also in previously healthy people.

“We found that 15 per cent of previously healthy people reported experiencing adverse health effects during the fires, however among people with chronic lung disease, this rose to 60 per cent,” says Professor Raina MacIyntre, who is leading the research at the Kirby Institute.

“Adverse health effects were defined as taking medication to alleviate symptoms, visiting a health service due to symptoms, or developing a chest infection within a week of bushfire smoke exposure. We also asked people about other adverse effects, like difficulty breathing, which was experienced by 22 per cent of respondents.

“Concerningly, 2 per cent of people with respiratory conditions were admitted to hospital as a result of adverse health impacts during this time,” Prof. MacIntyre says. “Among people with chronic lung disease, more than 40 per cent reported using extra reliever inhalers for asthma. People also reported increased use of oral medication including corticosteroids and antibiotics.”

“This may reflect the fact that younger adults are more likely to go outdoors during smoky conditions. It implies messages targeting this age group are needed to make them aware of the potential risks,” says Professor Guy Marks from UNSW and the Woolcock Institute.

The 2019-2020 bushfires hit Australia before the COVID-19 pandemic. However, mask use to minimise the impacts of bushfire smoke was common during this time, with 10-20 per cent of respondents to the survey reporting mask use during the bushfire season.

“A limitation of this study was that it was a snapshot in time based on self-report, so more research is needed. We are currently conducting a clinical trial of respirator and mask use during bushfire smoke exposure which may further inform future public health responses to bushfires,” says Professor MacIntyre.

You can get more information on the trial or register interest on the Kirby Institute's website.