The waste product which could help mitigate climate change

Biochar can boost crop yields in poor soils and help stop the effects of climate change, study finds. So why aren’t we using it more? 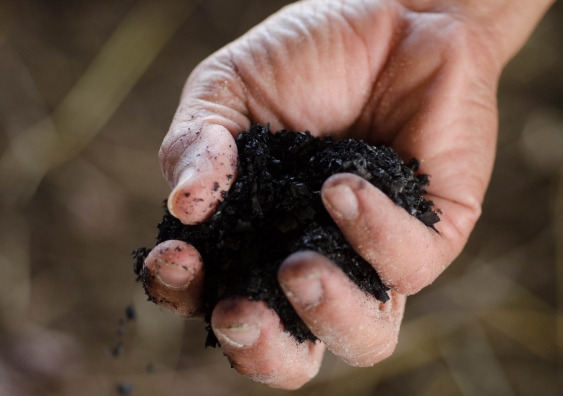 A product made from urban, agriculture and forestry waste has the added benefit of reducing the carbon footprint of modern farming, an international review involving UNSW has found.

Visiting Professor in the School of Materials Science and Engineering at UNSW Science, Stephen Joseph, says the study published in GCB Bioenergy provides strong evidence that biochar can contribute to climate change mitigation.

“Biochar can draw down carbon from the atmosphere into the soil and store it for hundreds to thousands of years,” the lead author says.

“This study also found that biochar helps build organic carbon in soil by up to 20 per cent (average 3.8 per cent) and can reduce nitrous oxide emissions from soil by 12 to 50 per cent, which increases the climate change mitigation benefits of biochar.”

The findings are supported by the Intergovernmental Panel on Climate Change’s recent Special Report on Climate Change and Land, which estimated there was important climate change mitigation potential available through biochar.

“The intergovernmental panel found that globally, biochar could mitigate between 300 million to 660 million tonnes of carbon dioxide per year by 2050,” Prof. Joseph says.

“Compare that to Australia’s emissions last year - an estimated 499 million tonnes of carbon dioxide – and you can see that biochar can absorb a lot of emissions. We just need a will to develop and use it.”

Biochar is the product of heating biomass residues such as wood chips, animal manures, sludges, compost and green waste, in an oxygen-starved environment – a process called pyrolysis.

The result is stable charcoal which can cut greenhouse emissions, while boosting soil fertility.

The GCB Bioenergy study reviewed approximately 300 papers including 33 meta-analyses that examined many of the 14,000 biochar studies that have been published over the last 20 years.

“It found average crop yields increased from 10 to 42 per cent, concentrations of heavy metals in plant tissue were reduced by 17 to 39 per cent and phosphorous availability to plants increased too,” Prof. Joseph says.

The study details for the first time how biochar improves the root zone of a plant.

In the first three weeks, as biochar reacts with the soil it can stimulate seed germination and seedling growth.

During the next six months, reactive surfaces are created on biochar particles, improving nutrient supply to plants.

After three to six months, biochar starts to ‘age’ in the soil and forms microaggregates that protect organic matter from decomposition.

Prof. Joseph says the study found the greatest responses to biochar were in acidic and sandy soils where biochar had been applied together with fertiliser.

“We found the positive effects of biochar were dose dependent and also dependent on matching the properties of the biochar to soil constraints and plant nutrient requirements,” Prof. Joseph says.

“Plants, particularly in low-nutrient, acidic soils common in the tropics and humid subtropics, such as the north coast of NSW and Queensland, could significantly benefit from biochar.

Prof. Joseph AM is an  expert in producing engineered stable biochar from agriculture, urban and forestry residues.

He has been researching the benefits of biochar in promoting healthy soils and addressing climate change since he was introduced to it by Indigenous Australians in the seventies.

He says biochar has been used for production of crops and for maintaining healthy soils by Indigenous peoples in Australia, Latin America (especially in the Amazon basin) and Africa for many hundreds of years.

Biochar has also been recorded in the 17th Century as a feed supplement for animals.

But while Australian researchers have studied biochar since 2005, it has been relatively slow to take off as a commercial product, with Australia producing around 5000 tonnes a year.

“This is in part due to the small number of large-scale demonstration programs that have been funded, as well as farmers’ and government advisors’ lack of knowledge about biochar, regulatory hurdles, and lack of venture capital and young entrepreneurs to fund and build biochar businesses,” Prof. Joseph says.

Needs to be economically viable

Prof. Joseph, who has received an Order of Australia for his work in renewable energy and biochar, says to enable widespread adoption of biochar, it needs to be readily integrated with farming operations and be demonstrated to be economically viable.

“We’ve done the science, what we don’t have is enough resources to educate and train people, to establish demonstrations so farmers can see the benefits of using biochar, to develop this new industry,” he says.

However this is slowly changing as large corporations are purchasing carbon dioxide reduction certificates (CORC’s) to offset their emissions, which is boosting the profile of biochar in Australia.

Biochar has potential in a range of applications.

Prof. Joseph co-authored a recent study in International Materials Reviews which detailed the less well-known uses of biochar, such as a construction material, to reduce toxins in soil, grow microorganisms, in animal feed and soil remediation.

UNSW has a collaborative grant with a company and a university in Norway to develop a biochar based anti-microbial coating to kill pathogens in water and find use in air filtration systems, he says.

DISCLOSURE: Stephen Joseph is a member of the Australian New Zealand Biochar Industries Group. The Universities where he works have received grants from both state and federal governments and from companies for the development and testing of biochars. He has also assisted companies and farmers develop fit for purpose biochars and equipment to make biochars.