So many climate models, so little time … A new way of measuring ocean temperatures helps scientists sort the likely from unlikely scenarios of global warming. 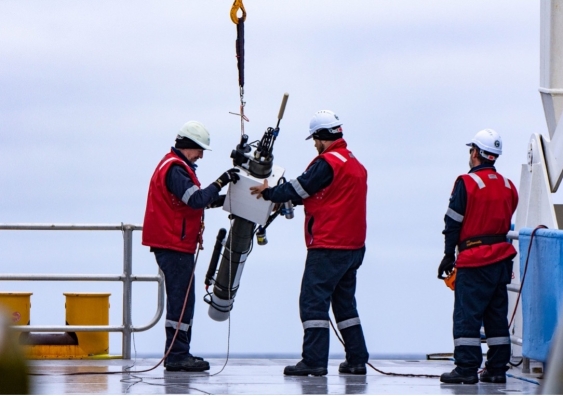 We’ve heard that rising temperatures will lead to rising sea levels, but what many may not realise is that most of the increase in energy in the climate system is occurring in the ocean.

Now a study from UNSW Sydney and CSIRO researchers has shown that a relatively new ocean temperature measuring program – the Argo system of profiling floats – can help tell us which climate modelling for the 21st century we should be paying attention to the most.

Professor John Church from UNSW’s Climate Change Research Centre in the School of Biological, Earth and Environmental Sciences says the study published today in Nature Climate Change is an attempt to narrow the projected range of future ocean temperature rises to the end of the 21st century using model simulations that are most consistent with the Argo’s findings in the years 2005 to 2019.

“The models that projected very high absorption of heat by the ocean by 2100 also have unrealistically high ocean absorption over the Argo period of measurement,” Prof. Church says.

“Likewise, there are models with lower heat absorption in the future that also don’t correspond to the Argo data. So we have effectively used the Argo observations to say, ‘which of these models best agree with the observations and therefore constrain projections for the future?’”

Named after the boat which Greek mythological hero Jason travelled on in search of the golden fleece, the Argo floats are loaded with high-tech equipment that measures ocean temperatures to depths of up to 2000 metres.

Each Argo float sends measurements to satellites which then beams the results to analysis centres around the world. There are more than 3500 floats dispersed around the globe, with the bulk of them managed by the US (more than 2000) while Australia accounts for the next highest number of floats, numbering 317. 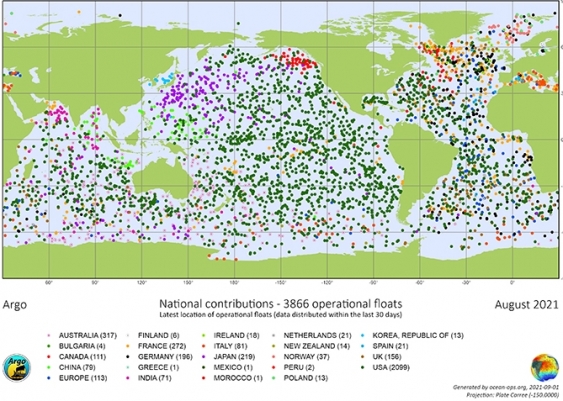 A world map showing the locations of all Argo floats. Image: Argo Project

Prof. Church says the Argo floats offer a new level of accuracy in temperature measurement. Not only are the high-tech instruments more reliable than in the past, but the coverage of the planet’s oceans is so much more thorough.

“Previously we depended on research ships making very high accuracy measurements, but only in very restricted areas. Or we would get merchant ships to drop expendable instruments into the water which gave better coverage, but with much less accurate instruments.

“Using these approaches, there were much larger gaps in the Southern Ocean because these waters were less trafficked.”

The ubiquity of the Argo floats offers unprecedented real-time monitoring of ocean temperatures that will help oceanographers and climate scientists constrain their climate projections based on this higher resolution and accuracy of data.

One of the takeaways from the team’s analysis of the Argo data is that land and air temperatures only tell part of the story about the planet’s overall heat absorption. Prof. Church says the apparent stability of temperatures in the early 21st century did not correspond with the Argo’s recording of sea temperatures in the same period.

“More than 90 per cent of the energy trapped by greenhouse gases is stored in the ocean and only about 1 per cent in the warming atmosphere,” he says.

“In the first decade of this century, average surface temperature didn’t increase that much. And it created a lot of room for climate sceptics to say ‘what climate change?’. But throughout that period, oceans continued to take up heat – and this is where the 90 per cent of the energy in the ocean versus the 1 per cent in the atmosphere becomes critically important in the total climate system.

“The climate system was still increasing its overall heat content over this period.”

It turns out that the projections of rising air and sea temperatures by some models in a recent set of modelling in the Coupled Model Intercomparison Project are warming too rapidly.

The models in CMIP5, which was completed from 2010 to 2014, fits in with the Argo observations more closely than CMIP6, which was only recently completed.

“Some of the 28 CMIP6 models we used were more sensitive to greenhouse gases for their projections,” Prof. Church says.

“Projections of climate change to the end of the century all take into account the effects of greenhouse gas emissions which are already responsible for much of the increased temperatures we’ve seen in the 20th and early 21st centuries.

“Even if we take strong steps now to limit emissions to the upper bound of the Paris Agreement target of  2oC global surface warming, ocean temperatures are still projected to rise five to nine times the observed warming by 2081-2100, with 8 to 14cm rise in sea levels from the expansion of warmed ocean waters alone.”

With no concerted efforts to rein in emissions, oceans are set to warm by 11 to 15 times the warming observed by Argo in 2005-2019, with sea levels projected to rise 17 to 26 cm from the expansion of warmed ocean waters alone, and further rises from the addition of water to the ocean from glaciers and ice sheets.

Prof. Church says the Argo data has given scientists much more solid figures to work with when making projections about warming. In fact, the likely range of the constrained projections using the Argo data is 17 per cent narrower than the IPCC’s Sixth Assessment Report.

“While a longer Argo observational period will allow us to further tighten the range of projected ocean warming and sea level rise, the Argo observations and the climate model projections already highlight the need to urgently and very significantly mitigate our greenhouse gas emissions if we are to avoid dangerous impacts of ocean warming and sea level rise.”

Read more: How much will our oceans warm and cause sea levels to rise this century? We’ve just improved our estimate