An 80% adult vaccination rate corresponds to 64% of the overall population, leaving plenty of people susceptible to the virus if restrictions ease too quickly. 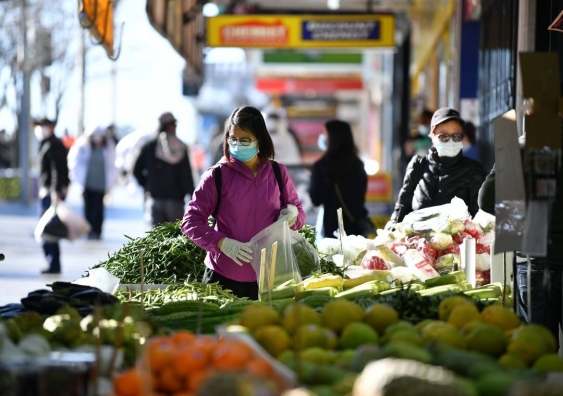 New South Wales plans to relax restrictions when vaccination targets of 70% and 80% of those aged 16 years and over are met.

The current discussion has been around “the peak” occurring during current restrictions.

But modelling from my team at UNSW shows if current restrictions are relaxed while a large proportion of the community is unvaccinated, a larger, second peak may occur that may overwhelms our hospitals – unless countermeasures are taken to prevent that.

The 70-80% adult vaccination targets correspond to 56-64% of the whole population, leaving plenty of room for the virus to spread among increasingly mobile people.

If the first relaxation of restrictions occurs around October 18, our modelling predicts a second, larger peak will occur between December 24-29 2021.

If restrictions are only relaxed around November 6 when the 80% target is met, the peak occurs later, between January 6-12 2022 instead of around Christmas day.

The current strategy of mass vaccination is vital to our exit plan. But vaccination alone cannot control an epidemic that began when fully vaccinated rates were extremely low.

This is because the virus spreads much faster (days) than the time taken to benefit from vaccine immunity after two doses (two months, with a six week interval between doses and two weeks after the second dose to get maximal immunity).

Also current vaccines are not as effective against the Delta variant due to a combination of vaccine escape (meaning they’re not exactly matched to the Delta strain) and waning immunity.

The restrictions used in NSW since the end of June have kept a lid on it, but case numbers have continued to grow. We estimated the 70% target may be met around October 18, and case numbers at that time may be in the thousands.

Depending on what steps accompany that relaxation, many different scenarios are possible. Modelling allows us to look at best and worst case scenarios and ensure the worst never occurs.

Controlling an epidemic is like balancing a set of old fashioned scales. Imagine the virus is a large, menacing metal weight sitting on one side, and the public health measures are a bunch of weights on the other, which are combined to keep the fight even. 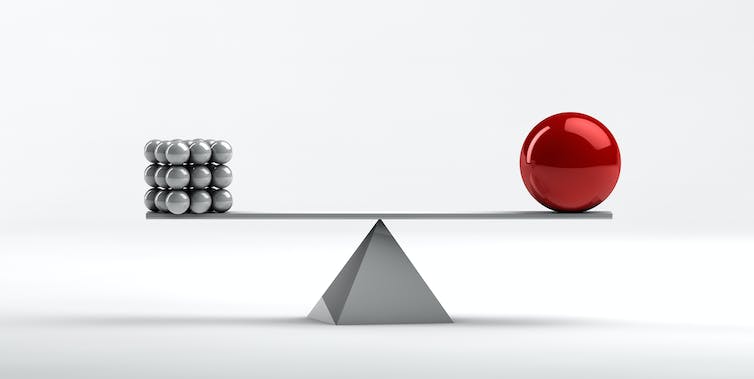 Modelling shows the effect of changes on either side of the scale. Shutterstock

The Delta virus is very heavy, so we need many public health “weights” to keep it from winning. Vaccination alone is not enough, as we have seen in the United States, United Kingdom and Israel.

The public health “weights” include:

Modelling can help us work out the effect of changes on either side of the scale. What if the epidemic is bigger? What if we remove movement restrictions?

That will tip the scales in favour of the virus, so we need to add more into the public health bowl to compensate for that removal. Maybe we can add more contact tracing, mask use or testing.

It’s a constant dance in trying to outwit the virus, and modelling helps by allowing to forecast the impact of different approaches to relaxing restrictions.

We already know that to relax restrictions, we need high vaccination rates. But because the vaccine is not enough against Delta, at the 70-80% adult targets (which correspond to 56-65% of the whole population) there is still plenty of scope for the virus to spread.

COVID-19 will find under-vaccinated pockets and communities, whether it be disadvantaged urban communities or remote Aboriginal communities like Wilcannia, which had a 7% rate of full vaccination when the Sydney outbreak arrived there.

So, our modelling shows that if you remove restrictions on movement, you need to add more weights to the public health bowl to stop the scales tipping in favour of the virus. This is the vaccine-plus and ventilation strategy recommended by OzSAGE, a new independent expert network I’m part of, which outlines a safe pandemic exit strategy.

It means when we open schools, we need to open classroom windows too, ensure clean air in classrooms, ensure parents and teachers are vaccinated, and have kids wearing masks.

We estimated the NSW capacity to rapidly trace contacts dropped off in mid-August.

So, in preparation of increasing mixing of people, we could massively scale up contact tracing capacity using digital methods. This would be adding more weight to the public health bowl.

We need to make sure testing capacity remains high and think about making rapid testing more widely available in schools, workplaces and homes.

How bad could it get?

We modelled six different scenarios and ways of adjusting the weights in the scales to ensure we do not overwhelm the health system.

We used the NSW definition of “code black” – when there are not enough ICU beds and alternative models of care are needed. We used this to forecast scenarios that could cause or avoid code black conditions.

The best case scenarios would only have a single relaxing of restrictions and retain high mask use, scale up contact tracing, and retain some reduction of mixing between people.

On the other hand, relaxing restrictions progressively between the 70% and 80% targets, or drastically increasing mixing, while reducing mask use at the same time, and not improving contact tracing, will be taking too many weights out of the public health bowl. This would allow the virus to overwhelm the health system.

If ICU care cannot be provided, the death rate will increase because all people who need ICU cannot receive it. So it’s essential we avoid code black conditions.

There are an infinite number of scenarios we could model, but the general trade-off between both sides of the scales are demonstrated by the model.

All models have uncertainty in them. Models predict a range of possibilities under different conditions, and worst-case scenarios usually do not eventuate, because authorities use the models to inform the prevention of severe scenarios. They may also reinstate restrictions if the health system is under threat.

Models are a valuable tool to guide and provide transparency to decision-making. At the moment, the choices in NSW are between “not great” and “terrible”. But that will change.

In time, we will have better vaccines (matched to Delta), boosters and higher vaccination rates in all Australians including children. These will add more weight to the public health side of the scales, and hopefully prevent the virus from winning.