Andy Baker, who researches the water underground, has been recognised by the highly esteemed earth sciences organisation. 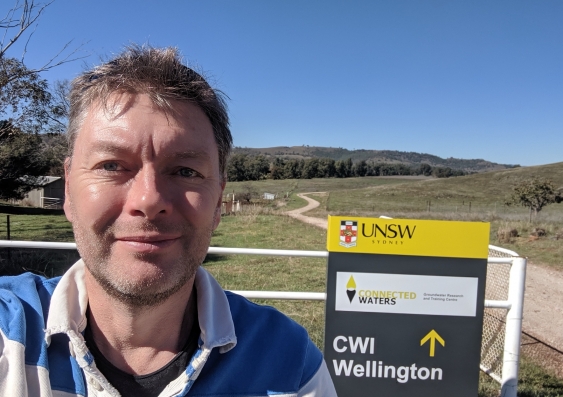 UNSW Science’s Professor Andy Baker has been elected a 2021 Fellow of the American Geophysical Union (AGU), the most prestigious earth sciences organisation globally. His nomination is for sustained excellence in water and climate science, especially the use of chemical tracers including applications to reconstructing past climates from stalagmites.

Professor Baker researches the water underground – from caves to aquifers. Using stalagmites, he reconstructs past climates, past groundwater recharge and past fire history. He characterises organic matter in natural and human environments, from groundwater to drinking water. Common themes include an interdisciplinary scientific approach between the areas of environmental earth science and engineering, and the use of isotopic and geochemical techniques.

“I am honoured to have my multidisciplinary research recognised by the American Geophysical Union, the international peak association for the earth sciences," Professor Baker said.

“Andy has been years ahead of his time in many research areas including cave monitoring and process and theory validation, organic biomarkers in speleothems and hydrological and isotope modelling,” she said.

“He is highly motivated by service to his research communities as well as nurturing early career researchers. His range of work across disciplines makes him an ideal candidate for this accolade.”

Professor Baker’s PhD, from the University of Bristol, focused on karst hydrology, paleoclimate and isotope geochemistry. He has been an academic for more than 25 years, at the universities of Exeter, Newcastle and Birmingham before UNSW Sydney. He joined UNSW in 2010 and led a major research program of the Australian Research Council (ARC) National Centre for Groundwater Research and Training. Professor Baker established the largest and most systematic cave drip water monitoring program ever implemented.

He has published more than 250 articles in peer-reviewed international journals including Nature, Science, Nature Communications and Nature Geoscience. Professor Baker has been awarded, and has successfully managed, over 75 research grants.

In 2021, Professor Baker became a Fellow of the Australasian Cave and Karst Management Association (ACKMA). In 2009, he received a Durham University Institute for Advanced Studies Fellowship, in 2003, he was awarded a Phillip Leverhulme Prize for Geography, and in 1999, a Millennium Award.