Former prime minister Malcolm Turnbull told a discussion on achieving carbon neutrality that Australia is viewed as a “climate laggard”. 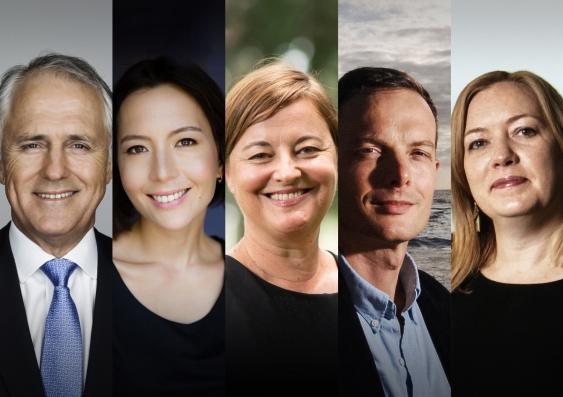 As one of the world’s highest per capita emitters and fossil fuel exporters, Australia has come under increasing pressure to commit to carbon neutrality by 2050.

But how do we get to zero net emissions by the much talked about deadline?

The discussion was hosted by journalist and author Sarah Dingle and presented by UNSW Engineering and UNSW Centre for Ideas.

Investment in renewables was central to the transition to a zero net emission economy, Mr Turnbull said.

“You need the technology, the innovation, the capital base risk, and also the big institutional dollars to back the infrastructure that is needed to deliver a clean energy economy.

“There is no question that today the cheapest form of new power generation in Australia is renewables, plus storage.”

While advocating for renewables and green hydrogen, Mr Turnbull said he didn't believe nuclear power was necessary for the transition to net zero.

“Would you build nuclear power plants to generate electricity in Australia for energy reasons? No, I don't think you would – leaving aside the gigantic environmental issues.”

Governments and their banking systems also needed to stop financing fossil fuel companies, Mr Turnbull said, adding that China was a country that no longer financed coal-fired power stations in other countries.

“Wealthy developed countries like Australia have got to take a leading part in this. We've got to lead by example, but we are being seen now as an absolute climate laggard.”

The first steps required were “a very deep decarbonisation strategy across industry and society”, CEO of the UNSW Energy Institute Justine Jarvinen said.

This includes five key strategies for decarbonisation into the future.

“The first bucket is energy efficiency and productivity. So, we simply need to make energy-consuming devices and systems more efficient and more productive,” she said.

“The second bucket is, we need to decarbonise the grid using renewable energy to make so-called green electrons.

“Thirdly, we need to electrify everything transport, industrial systems to power as much as we can with those green electrons.

“Fourth, for industries and processes that can't be electrified, we need to use green electrons to make hydrogen and synthetic fuels and chemicals.

“And fifth, because we can't totally eliminate carbon emissions, we need to sequester the carbon dioxide that's leftover.”

Intermediary body between scientists and business

UNSW Science’s Professor Andy Pitman, who is Director of the ARC Centre of Excellence for Climate Extremes, was asked what needed to be done to get science, business and communities working together towards a common goal of a zero carbon world.

“Climate scientists have spent many decades trying to understand how the Earth's climate would change for a given amount of greenhouse gas emissions. We know really confidently what the climate would look like, and how the climate differs between 2015 and 2100,” Prof. Pitman said.

“If you're a business, you're not actually interested in the global average changes or even the continental average changes that don't translate into a risk to your company. What you want to know as a company is the tangible or material risks that you are personally exposed to as a business, and climate science has never really worked on those scales.”

Prof. Pitman said an intermediary body between climate scientists and business groups may be the solution to get organisations to understand the science of climate change.

Similar to the Bureau of Meteorology, the climate intermediary would understand the detail of climate data and modelling and could act as an advisory group to business, including advising what technologies and product innovations are required to reduce emissions, he said.

Industry needs to take up the challenge

Ernst & Young’s Oceania Partner for Climate Change and Sustainability, Emma Herd, said a concerted effort by investors and companies was also required for an industry transformation not seen since the industrial revolution.

Whether to divest, decarbonise or decommission carbon intensive assets was a challenge that different industry sectors were facing, she said.

“Companies need to be understanding where the carbon risk is in their portfolio of assets.”

The path to net zero emissions is also challenging for the investor community.

“Part of our transition journey is to diversify our portfolio of assets, to create revenue streams, to allow us to invest in new emerging opportunities,” Ms Herd said.

The virtual event was presented by UNSW Centre for Ideas and UNSW Engineering and supported by Inspiring Australia as a part of National Science Week.

Visit the UNSW Centre for Ideas website for more information and to watch the full discussion: Zero Carbon World.