Frog calls and DNA reveal the loudest Australian frog is not one but three different species. 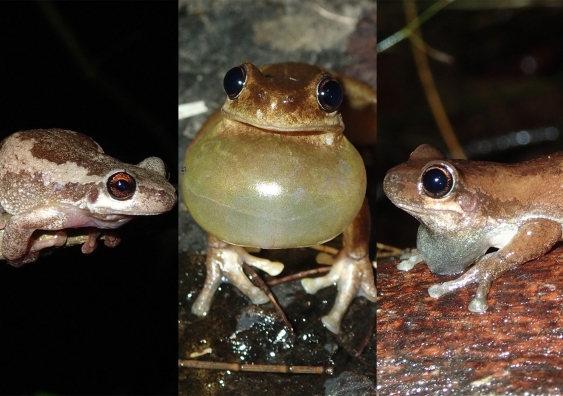 Scientifically described with the help of citizen scientists and their recordings through the Australian Museum’s FrogID app, the new frog species were once thought to be one species, the Bleating Tree Frog, Litoria dentata.

Dr Jodi Rowley, a herpetologist from UNSW Sydney and at the Australian Museum, as well as lead scientist on the groundbreaking FrogID project, said that the Bleating Tree Frog is well known to residents along the east coast of Australia and in Sydney for its extremely loud, piercing, almost painful call.

“These noisy frog bachelors are super loud when they are trying to woo their mates,” Dr Rowley said.

The scientists analysed many calls submitted to the FrogID project from across Queensland and NSW to differentiate between the calls.

“Our examination revealed that their calls differ slightly in how long, how high-pitched and how rapid-fire they are. The Slender Bleating Tree Frog has the shortest, most rapid-fire and highest pitched calls,” Dr Rowley said.

Chief Research Scientist at the South Australian Museum, Professor Steven Donnellan, said that genetic work was the first clue that there were actually three species.

“Although similar in appearance, and in their piercing calls, the frogs are genetically very different. I’m still amazed that it’s taken us so long to discover that the loudest frog in Australia is not one but three species,” Professor Donnellan said.

The Slender Bleating Tree Frog, as its name suggests, is slender in appearance, and has a white line extending down its side, and males have a distinctly black vocal sac.

The Screaming Tree Frog isn’t nearly as slender, has no white line extending down its side, and males have a bright yellow vocal sac.

In the breeding season, the entire body of males of the Screaming Tree Frog also tend to turn a lemon yellow.

The Robust Bleating Tree Frog is most similar in appearance to the Screaming Tree Frog, but males have a brownish vocal sac that turns a dull yellow or yellowish brown when fully inflated.

Professor of Biology at the University of Newcastle, Professor Michael Mahony, who over his long career has developed a cryopreservation method – the first genome bank for Australian frogs, said the three closely-related species are relatively common and widespread.

“They are also all at least somewhat tolerant of modified environments, being recorded as part of the FrogID project relatively often in backyards and paddocks, as well as more natural habitats,” Professor Mahony said.

Dr Rowley said that these new frog species brings the total number of native species known from Australia to 246, including the recently recognized Gurrumuls’ Toadlet and the Wollumbin Pouched Frog.

“The research and help from our citizen scientists highlights the valuable contribution that everyone can make to better understand and conserve our frogs,” Dr Rowley said.

“How many more undescribed species in the ‘quiet achiever’ category are awaiting their scientific debut?,” Professor Donnellan said.

The paper’s publication coincides with the end of FrogID Week 2021, which ran from November 12 until November 21.

More than 20,000 verified frog records have been uploaded by the public to date through the citizen science project, FrogID.