A UNSW study aims to establish what can be done to reduce the rate of P-plate car crashes. 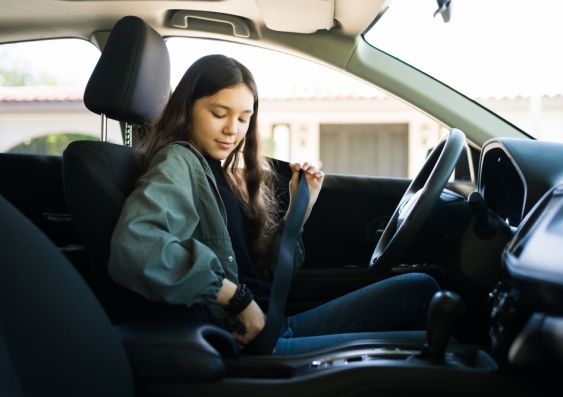 A first time P-plater is 33 times more likely to have a car accident than a learner driver, but the risk of them crashing halves six months after they get their licence.

UNSW Science’s School of Aviation is attempting to work out what can improve young drivers’ behaviour in their first six months of driving and needs volunteers who have just got their P-plates to take part.

“Understanding the challenges and risks young novice drivers face during the first few months of driving is important in reducing these risks,” Dr Brett Molesworth from UNSW Science’s School of Aviation says.

The Associate Professor is an expert in Human Factors and Aviation Safety, has an applied background in the area of road safety and a PhD in Psychology.

He says drivers under the age of 25 are overrepresented in motor vehicle accidents: they make up just 15 per cent of the driving population, yet 21 per cent of drivers in NSW involved in a motor vehicle crash are under 25.

This statistic is reflected in other states throughout Australia.

“While these methods can provide insight into driver behaviour, they often fail to capture all the factors that affect young drivers,” he says.

“So we know very little about the challenges young drivers face, what factors put them at risk when driving, and how they respond to these challenges.”

Dr Molesworth is leading a research project in conjunction with Monash University Accident Research Centre and the Road Safety Commission of WA which he hopes will help researchers identify the challenges faced by young drivers in the early stages of being licenced.

As part of the study, the cars of young drivers in their first four months of driving after obtaining their P1 licence will be fitted with a GPS, radar and cameras which will record visuals both inside and outside the vehicle.

“This will let us know where the driver is, the speed they are travelling at, the speed zone they are located in, the drivers’ actions as well as the environment they are in,” Dr Molesworth says.

The aim of the study is two-fold.

“First, we want to understand how young newly licenced (novice) drivers operate their motor vehicle, so we can learn about the challenges young novice drivers experience, as well as what factors put these drivers at risk of a motor vehicle crash,” Dr Molesworth says.

“Second, we want to test the efficacy of a new intervention we developed and tested in the laboratory, to reduce young novice drivers’ speeding behaviour.

“This intervention – after a 20 minute drive - involves getting the young driver to think about their driving performance from a drive just undertaken, in terms of the speed they elected to travel at, and providing them feedback about their speed choice, which includes information about the potential consequences associated with speeding.”

The knowledge gained from the study will be used to improve road safety, ultimately reducing the number of road crashes and fatalities.

“We also intend to use this knowledge to foster change in various areas such as redesigning training programs and licence requirements,” Dr Molesworth says.

The project is being jointly funded by an ARC Discovery Project grant and the Road Safety Commission of WA.

What we know from previous research

According to the World Health Organisation, speeding is recognised as one of the leading risk factors contributing to road crashes.

A 2018 study by the UNSW School of Aviation set out to investigate whether self-explanation, reflection or feedback could improve young drivers’ speed management behaviour in a driving simulator.

Dr Molesworth says self-explanation is a learning strategy which focuses on explaining one’s action to oneself, whereas reflection is when the driver develops knowledge through analysis of case examples.

“This reflection process involves asking a series of simple questions, such as “what happened” and “why it happened” as well as providing alternate actions, and their impact on the scenario, which help generate reasonable judgements, thought to lead to enhanced decision-making,” Dr Molesworth says.

“Feedback involved information about the speed travelled and the implications of speeding from a safety and financial perspective.”

The study looked at whether either approach helped improve the driver’s speeding behaviour if it was best done immediately, one week after training or six months after training.

“However, feedback on performance, financial infringements and safety implications for speeding was found to be the most effective training intervention, which led to improvement in young drivers’ speed management behaviour across all experimental conditions, speed zones, and time periods.”

Another 2018 study aimed to determine which aspect of feedback to 100 young drivers yielded the most positive effect in terms of improving young drivers’ speed management in a driving simulator: feedback about the driver’s performance, financial infringements, safety implications for speeding, or a combination of all three [combined feedback].

“The results showed that all types of feedback are effective in modifying young drivers’ speed management behaviour, and these effects were present up to six months post-training in both low and high-speed zones,” Dr Molesworth says.

But while feedback containing information on performance alone was effective, feedback that also contained information on safety and financial outcomes was of most benefit.

A third study in 2019 then tested if these results, particularly giving feedback and self-explanation, translated to young drivers on the road, but also tested auditory feedback in cars.

“In many modern cars, it is possible to set an auditory alert if the posted speed limit is exceeded,” Dr Molesworth says.

“There is little known, however, about how well this auditory feedback prevents speeding.”

The results revealed in the test drive immediately after the drive, and one week after the test drive, that combined feedback was most effective in reducing the average speed and percentage of time speeding in both the low-speed [50km/h] and high-speed [80km/h] zones.

“These are the interventions – getting young drivers to think about their performance and providing them with feedback, particularly about their choice and consequences of speed – that we wish to test in this current study.”

Young novice drivers between the ages of 17 to 20 who would like to enrol in the study should contact b.molesworth@unsw.edu.au. Those eligible to participate must have access to their own vehicle, live in Sydney, not be an identical twin nor have a medical condition that might affect driving and be available to commence within three weeks of obtaining their P1 Licence. Participants will be reimbursed with a $250 Coles/Myer voucher.