Comets' heads can be green, but never their tails. After 90 years, we finally know why

The team solved this mystery with the help of a vacuum chamber, a lot of lasers, and one powerful cosmic reaction. 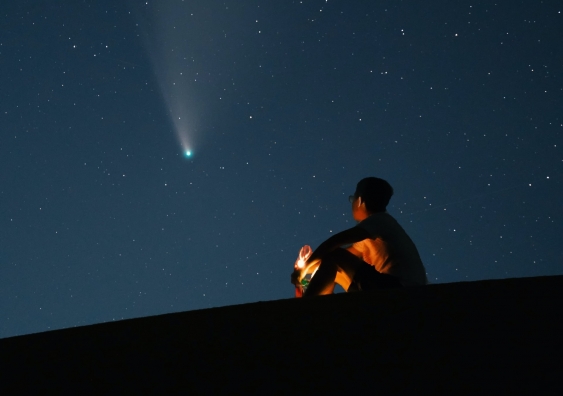 Every so often, the Kuiper Belt and Oort Cloud throw galactic snowballs made up of ice, dust and rocks our way: 4.6-billion-year-old leftovers from the formation of the solar system.

These snowballs – or as we know them, comets – go through a colourful metamorphosis as they cross the sky, with many comets’ heads turning a radiant green colour that gets brighter as they approach the Sun.

But strangely, this green shade disappears before it reaches the one or two tails trailing behind the comet.

Astronomers, scientists and chemists have been puzzled by this mystery for almost a century. In the 1930s, physicist Gerhard Herzberg theorised the phenomenon was due to sunlight destroying diatomic carbon (also known as dicarbon or C2), a chemical created from the interaction between sunlight and organic matter on the comet’s head – but as dicarbon isn’t stable, this theory has been hard to test.

A new UNSW Sydney-led study, published today in Proceedings of the National Academy of Sciences (PNAS), has finally found a way to test this chemical reaction in a laboratory – and in doing so, has proven this 90-year-old theory correct.

“We’ve proven the mechanism by which dicarbon is broken up by sunlight,” says Timothy Schmidt, a chemistry professor at UNSW Science and senior author of the study.

“This explains why the green coma – the fuzzy layer of gas and dust surrounding the nucleus – shrinks as a comet gets closer to the Sun, and also why the tail of the comet isn’t green.” 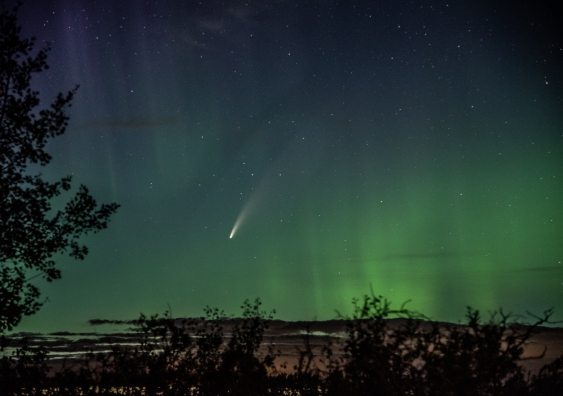 Dicarbon – the chemical responsible for giving many comets their green colour – can only be found in extremely energetic or low oxygen environments like stars, comets and the interstellar medium. Photo: Unsplash.

The key player at the centre of the mystery, dicarbon, is both highly reactive and responsible for giving many comets their green colour. It’s made up of two carbon atoms stuck together and can only be found in extremely energetic or low oxygen environments like stars, comets and the interstellar medium.

Dicarbon doesn’t exist on comets until they get close to the Sun. As the Sun starts to warm the comet up, the organic matter living on the icy nucleus evaporates and moves to the coma. Sunlight then breaks up these larger organic molecules, creating dicarbon.

The UNSW-led team have now shown that as the comet gets even closer to the Sun, the extreme UV radiation breaks apart the dicarbon molecules it recently created in a process called ‘photodissociation’. This process destroys the dicarbon before it can move far from the nucleus, causing the green coma to get brighter and shrink – and making sure the green tinge never makes it into the tail.

This is the first time this chemical interaction has been studied here on Earth.

“I find incredible that someone in the 1930s thought this is probably what's happening, down to the level of detail of the mechanism of how it was happening, and then 90 years later, we find out it is what's happening,” says Ms Jasmin Borsovszky, lead author of the study and former UNSW Science Honours student.

“Herzberg was an incredible physicist and went on to win a Nobel Prize for Chemistry in the 1970s. It’s pretty exciting to be able to prove one of the things that he theorised.”

Prof. Schmidt, who has been studying dicarbon for 15 years, says the findings help us better understand both dicarbon and comets.

“Dicarbon comes from the breakup of larger organic molecules frozen into the nucleus of the comet – the sort of molecules that are the ingredients of life,” he says.

“By understanding its lifetime and destruction, we can better understand how much organic material is evaporating off comets. Discoveries like these might one day help us solve other space mysteries.” 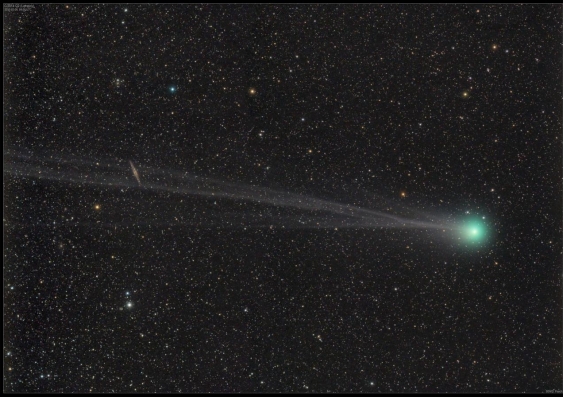 Dicarbon is too reactive to store in a bottle, so the researchers needed to make it themselves. Photo: NASA Goddard.

To solve this puzzle, the team needed to recreate the same galactic chemical process in a controlled environment on Earth.

They pulled this off with the help of a vacuum chamber, a lot of lasers, and one powerful cosmic reaction.

“First we had to make this molecule which is too reactive to store in a bottle,” says Prof. Schmidt. “It's not something we could buy from the shops.

“We did this by taking a larger molecule, known as perchloroethylene or C2Cl4, and blasting off its chlorine atoms (Cl) with a high-powered UV laser.”

The newly-made dicarbon molecules were sent travelling through a gas beam in a vacuum chamber, which was around two metres long.

The team then pointed another two UV lasers towards the dicarbon: one to flood it with radiation, the other to make its atoms detectable. The radiation hit ripped the dicarbon apart, sending its carbon atoms flying onto a speed detector.

By analysing the speed of these quickly-moving atoms, the team could measure the strength of the carbon bond to about one in 20,000 – which is like measuring 200 metres to the nearest centimetre.

Ms Borsovszky says due to the complexity of the experiment it took nine months before they were able to make their first observation.

“We were about to give up,” she says. “It took so long to make sure everything was precisely lined up in space and time.

“The three lasers were all invisible, so there was a lot of stabbing in the dark – quite literally.”

Prof. Schmidt says this is the first time anyone has ever observed this chemical reaction.

“It’s extremely satisfying to have solved a conundrum that dates back to the 1930s.” 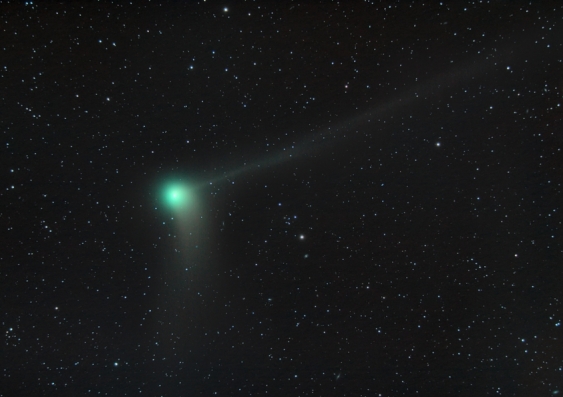 Could comets have once delivered the building blocks of life right to our doorstep? Photo: Shutterstock.

There are around 3700 known comets in the solar system, although it’s suspected there could be billions more. On average, a comet’s nucleus is a whopping 10 kilometres wide – but its coma is often 1000 times bigger.

Bright comets can put on spectacular shows for those lucky enough to see them. But in the past, comets might have done more than that for Earth – in fact, one of the theories about the origin of life is that comets once delivered the building blocks of life right to our doorstep.

“This exciting research shows us just how complex processes in interstellar space are,” says Professor Martin van Kranendonk, a UNSW astrobiologist and geologist who was not involved in the study.

“Early Earth would have experienced a jumble of different carbon-bearing molecules being delivered to its surface, allowing for even more complex reactions to occur in the leadup to life.”

Read more: We can all be stargazers – and now is the perfect time to start

Now that the case of the missing green tail in comets is solved, Prof. Schmidt, who specialises in space chemistry, wants to continue solving other space mysteries.

Next, he hopes to investigate diffuse interstellar bands: patterns of dark lines between stars that don’t match any atom or molecule we know of.

“Diffuse interstellar bands are a pretty big unsolved mystery,” he says. “We don’t know why the light that's arriving on Earth often has nibbles taken out.

“This is just one more mystery in a huge inventory of bizarre things in space that we’re yet to discover.”