No sign of a return to austerity, as team Frydenberg prevails over the budget hawks

The dominant forces in the Coalition seem to have learnt their lesson: Australia’s economy still needs serious budget support. 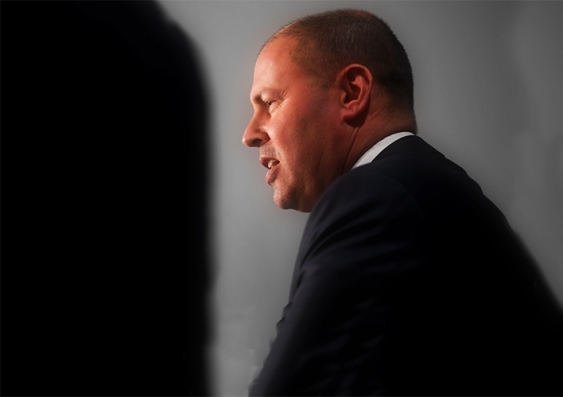 Thursday’s Mid-Year Economic and Fiscal Outlook reminds us of some uncomfortable truths.

In the short term, MYEFO forecasts the economy bouncing back, with deficits shrinking, unemployment falling, and growth rebounding.

But that will largely play out in the next financial year, 2022-23.

Beyond that, the forecasts have us returning to the relatively low-growth economy we endured before COVID.

Economic growth is forecast to be 3.25% in this financial year, back briefly in the 3-4% range we used to regard as normal.

Next financial year it is forecast to remain high at 3.25% before falling back to 2.25% and then 2.5%, well within the historically low territory it occupied before COVID. 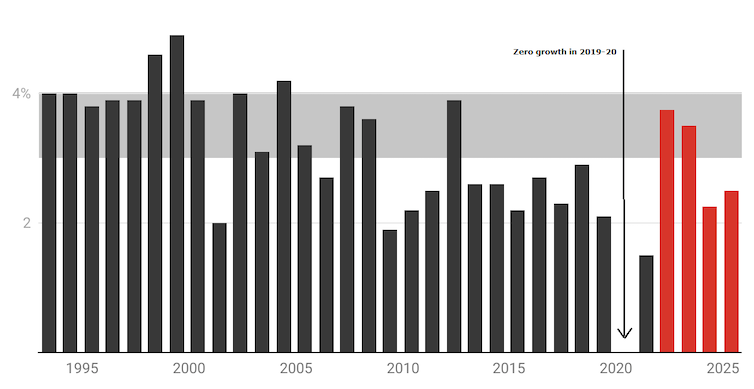 Unemployment, which is forecast to fall to an impressively low 4.25% by mid-2023, is forecast stay there in the following forecast years, improving no further.

The ongoing (if significantly smaller) budget deficits in coming years are a testament to the lesson learnt about the importance of spending to get economic growth up, and unemployment down.

Sluggish wages growth has been a persistent problem in advanced economies since the 2008 financial crisis. In the US, wages didn’t really get moving again until unemployment dropped to near 3%.

Perhaps an analogous thing will happen in Australia, or perhaps it might require a terminating unemployment rate lower than the forecast 4.25%.

We need an economic engine

Of course, economic and employment growth don’t just happen. They are driven, in no small part, by business investment.

As the following chart shows, this is forecast to bounce back strongly after a big drop during the pandemic. In part this simply reflects that kind of catch-up, but it also follows from an increase in business confidence.

What is now absolutely beyond doubt is that confidence is fragile, and depends on support from the government.

The old days of the 1980s, when it was seriously argued that government spending “crowds out” or frightens away rugged capitalists, are long behind us.

Treasurer Josh Frydenberg’s MYEFO statement makes clear there will be no return to austerity, no return (probably ever) to getting back in the black for its own sake.

The massive financial force used during the pandemic worked.

Government has to keep doing the heavy lifting

In due course the budget will need to return to something closer to balance. But there is no case whatsoever for a sharp U-turn – not one that Frydenberg and Treasury Secretary Steven Kennedy would countenance.

Team Frydenberg-Kennedy have prevailed over the Coalition budget hawks.

There are plenty on both the Coalition front and backbenches who still think the Liberal Party is the party of thrift. If that was ever true or sensible, it isn’t now.

One might think that Herbert Hoover’s disastrous austerity in the United States in the early 1930s proved the folly of that approach. Or the UK’s version following the 2008 financial crisis.

But, in any case, the dominant forces in the Coalition seem to have learnt their economic lesson. As they say in the classics: “however you get there…”