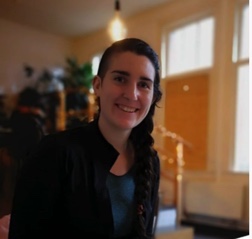 We are thrilled to report that PhD student Maeve McGillycuddy has won the 2021 J.B. Douglas Award.

Maeve was a joint winner of the award (with Quan Vu, University of Wollongong), which was presented at the Statistical Society of Australia's 22nd Annual J.B. Douglas Postgraduate Awards Day.

Maeve's talk, A new tool to fit multivariate random effects parsimoniously via a reduced rank approach, stems from her research under the supervision of Professor David Warton and Dr Gordana Popovic.

Each year, the J.B. Douglas Awards enable postgraduate students in statistics and related fields within NSW to showcase the depth, breadth and excellence of their research. It was hosted as a hybrid event this year, allowing audience members to join in-person or virtually.

The award is named in honour of Associate Professor Jim Douglas. Jim was a leading figure in statistics education in Australia, and spent almost all of his working life at UNSW after being appointed a lecturer in mathematics here in 1947. He was an active member of the Statistical Society of Australia.

Our PhD students have traditionally performed very strongly in the J.B. Douglas Award, with several winners across the 22-year history of the award. Over the past decade, we have hosted four winners (Maeve - 2021; Thais Rodrigues - 2016; Boris Beranger - 2014; Frances Hui - 2013) and one second prize winner (Tom Whitaker - 2018).

A very big congratulations to Maeve!