Marking her 30th anniversary at UNSW, the Scientia Professor is recognised for her research into catalysts for efficient clean energy conversion and sustainable environment. 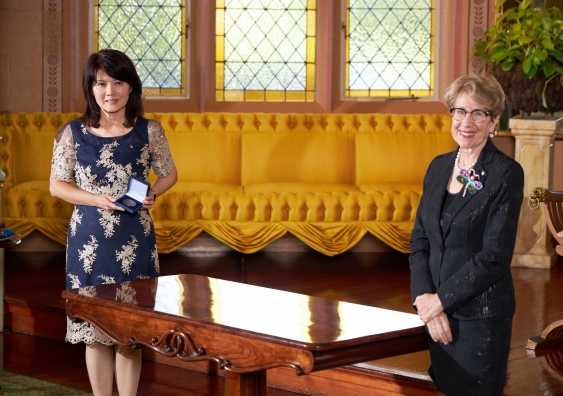 Scientia Professor Rose Amal from UNSW Engineering has been awarded the James Cook Medal for 2021, the most prestigious award offered by the Royal Society of NSW. The award is in recognition of her extensive “contributions to science and human welfare in and for the Southern Hemisphere”.

“I am delighted and honoured to receive such a prestigious award. This award is not just a recognition of my achievements, it is a recognition of the contributions of my research team, Particle and Catalysis Research Group (PartCat),” Prof. Amal said.

“Coincidently, today marks my 30th anniversary joining UNSW as an academic. I am very grateful to UNSW for giving me the support and opportunities since I came to Australia as an international student.

“Scientific catalysis breakthroughs from our group have seen their impact in solving humanity issues such as clean water and air pollution control, and I am glad that our scientific discoveries will continue to play a critical role in providing solutions to energy transition and decarbonisation.”

“Rose is an acknowledged international leader in the field of chemical engineering, pioneering fundamental particle and catalysis research and development.

“We are extremely proud of her research and the real-world impact it is having on the community. Her current research on the generation of clean hydrogen is a great example of future sustainability,” Prof. Foster said.

Prof. Amal was awarded the 2021 Chemeca Medal by the Australian and New Zealand Federation of Chemical Engineers, named the 2019 NSW Scientist of the Year, listed in Australia's Top 100 Most Influential Engineers (2012-2015), and has received the ExxonMobil Award (2012), the Judy Raper Women in Engineering Leadership Award (2012) and the NSW Science and Engineering Award – Emerging Research (2011). She has received the nation’s top civilian honour – the Companion of the Order of Australia –in the 2018 Queen's Birthday Honours for her eminent service to chemical engineering. She is a Fellow of Australian Academy of Technology and Engineering, Fellow of Australian Academy of Science, Fellow of Royal Society of NSW, Fellow of Institution of Chemical Engineers (IChemE), and Honorary Fellow of Engineers Australia.

Established in 1947, the James Cook Medal is awarded periodically for outstanding contributions to science and human welfare in the Southern Hemisphere.

UNSW researchers have received the James Cook Medal seven of the last eight times the medal has been awarded.