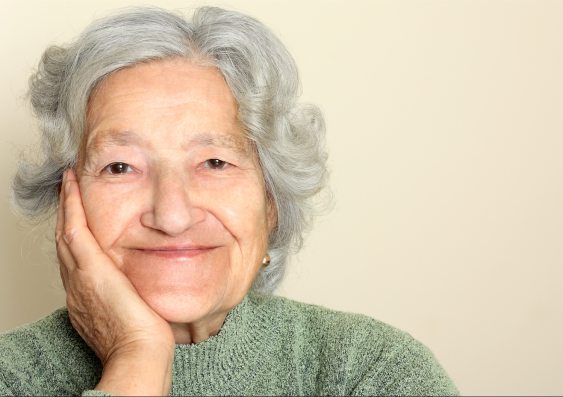 It’s an age-old question: do we – in older age – get better at regulating our emotions? Even responding more positively? The answer, according to a study conducted by UNSW psychologist Susanne Schweizer and colleagues from the University of Cambridge, seems to be ‘yes’.

The study, published in the Journal of Neuroscience, exposed 249 participants aged 18-88 to a series of film clips that ranged in emotional valence: positive (e.g. laughing baby), neutral (e.g. weather forecast), or negative (e.g. footage of the Rwandan genocide). Study participants were recruited from the Cam-CAN (The Cambridge Centre for Ageing and Neuroscience) sample, a balanced sample of the UK population expected to also represent the Australian population.

Participants were asked to simply watch the clips and allow any emotional response to arise naturally or, during half of the negative clips, actively reduce any unwanted or distressing negative emotions through a reframing of the negative content.

Afterwards, participants were asked to record the magnitude of positive and negative responses on a scale and then, on a separate scale, report their perceived success at regulating their emotional response.

The researchers found that – with increasing age – participants reacted more positively to both emotional and neutral stimuli and were better able to positively reframe a negative experience into a positive one.

“So we’re seeing an increase in positive emotionality with age,” explains Dr Susanne Schweizer, UNSW Science co-author of the study. “‘Emotionality’ is an individual’s reaction to information, to emotional information…basically how we respond to our environment.”

What’s more, these increases in positive emotionality occurred despite another quality of age that was already known of: ‘basal negative affect’, one’s resting mood state, which appeared to be more negative with age.

“Though the resting mood state of our older participants was more negative, participants were nonetheless able to extract more positivity from a given negative situation,” says Dr Schweizer.

“These data correspond quite neatly to the ‘Socioemotional Selectivity Theory’ of ageing. This theory states that, as we age, we become more adept at navigating our social environment, carrying a broader psychological toolkit, or simply rearranging our lives to minimise drama.”

This theory is in contrast with another – the ‘Ageing Brain Model’.

“In a nutshell, [the Ageing Brain Model] says that older people simply react more positively to distress because the areas in their brain that generate negative reactions don’t function as well.

“But there’s just no evidence for that here,” says Schweizer. “We didn’t see an independent contribution of amygdala volume [one of the brain regions involved in negative reaction] on participants’ emotionality.”

Additionally, the researchers compared emotional response data gathered in the trial against existing brain-imaging data, recorded from a previous structural MRI study of the same participants. 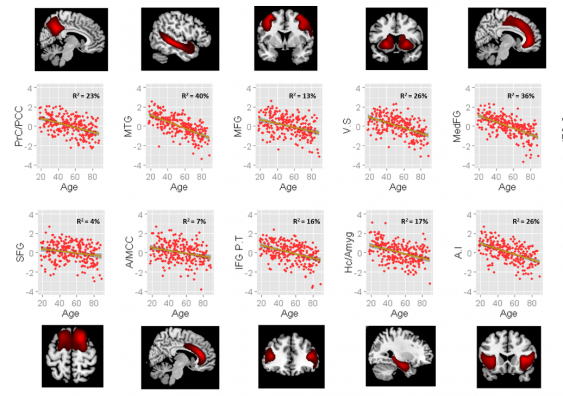 The relationship between age and ‘source-based morphometry’. Each area shows decline in proportion with age. Image: Supplied.

“The differences in structural integrity that we observed, in older versus younger participants, related to cortical thickness. We found a reduction in volume with age across all brain regions we investigated. This very much fits with the findings from other studies into the ageing brain.”

Following on from this study, Dr Schweizer and colleagues are investigating how negative and positive reactions have changed across the lifespan since COVID-19 and whether differently aged individuals were better able to regulate their emotions during these difficult times.