The sustained downward trend is likely due to high uptake of prevention measures, testing and high levels of treatment. 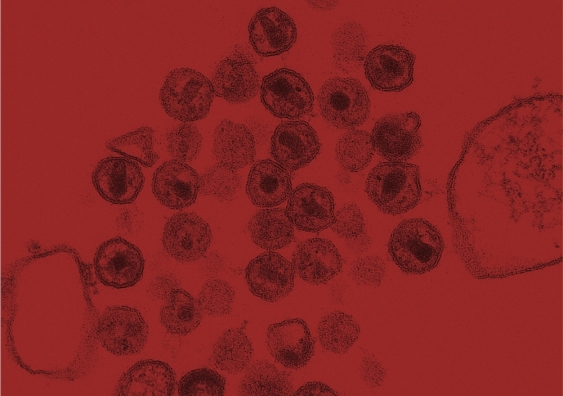 There were 552 new HIV diagnoses in Australia in 2021, meaning the number of new diagnoses has halved over the past 10 years, according to a new national HIV report released today by UNSW’s Kirby Institute at the joint HIV&AIDS and Sexual Health conferences on the Sunshine Coast.

Dr Skye McGregor from the Kirby Institute says, “HIV has been declining in Australia since 2015 and this is the lowest number recorded since the beginning of the HIV epidemic. Australia should be very pleased with this sustained downward trend in diagnoses. The declines are likely the result of high uptake of HIV prevention measures including pre-exposure prophylaxis, testing and high levels of treatment among people living with HIV.

“However, we need to consider these particularly low numbers in 2020 and 2021 within a context of changes to testing and sexual behaviour brought on by the COVID-19 pandemic. There is evidence of a decrease in testing, a decrease in casual sexual partners, as well as a decrease in the movement of people in and out of Australia. As we emerge from the pandemic and return to pre-pandemic behaviours, it’s important to remember to re-adopt HIV prevention measures, and to test frequently. As HIV testing rates also return to pre-pandemic levels, it is possible we will see increases in the number of HIV diagnoses,” Dr McGregor says.

Almost half of all new HIV diagnoses in 2021 were considered late diagnoses. This means that the person diagnosed had been living with HIV for four or more years without knowing their HIV status and was experiencing HIV-related illness.

“These communities may not have perceived themselves to be at risk. It is very important that we normalise HIV testing among heterosexual people. If you are getting tested for sexually transmissible infections, you should test for HIV too. Early diagnosis is crucial to support the health of individuals, as well as prevent onward transmission,” he says.

“Australia is very fortunate to have low HIV rates among these populations. We need to ensure that health programs and services supporting these groups, such as needle and syringe programs and peer-led prevention programs for people engaged in sex work, are sustained. There is also more work to be done to challenge the stigma and discrimination experienced by these groups, which creates social and legal barriers to accessing care,” Dr McGregor says.

Progress to be made on UNAIDS targets

UNAIDS has set global targets for the proportion of people with HIV who have been diagnosed, are on treatment and who have achieved viral suppression – this means that their treatment has made their HIV undetectable and untransmittable. The current target is 95-95-95 by 2025.

At the end of 2021 an estimated 29,460 people in Australia were living with HIV. An estimated 91 per cent of these were diagnosed, 92 per cent of those diagnosed were on antiretroviral therapy (ART) and 98 per cent of people on ART had achieved viral suppression (91-92-98).

“Despite record low HIV diagnoses, additional investment and effort is needed for Australia to achieve its UNAIDS targets,” says the Kirby Institute’s Adjunct Professor Darryl O’Donnell, who is CEO of the Australian Federation of AIDS Organisations (AFAO).

“It is encouraging that 91 per cent of people with HIV are aware of this status, however this proportion has not improved very much in the last few years. It’s vital that people know their HIV status. Greater effort is needed to promote HIV testing among all those who may have HIV.

“AFAO and the community-led HIV response are ready and able to partner with government to go the last mile and fulfil our potential.” 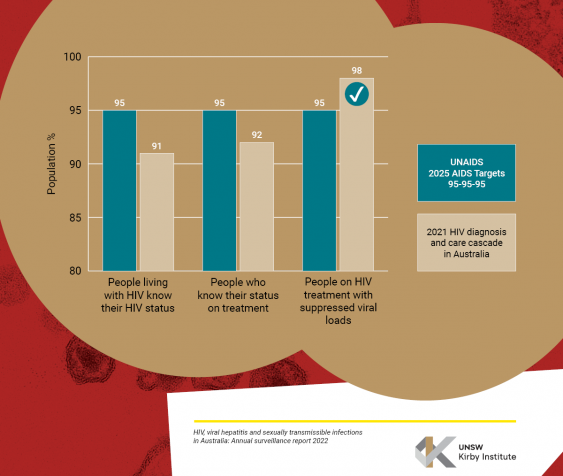 Over the past 10 years, there has been a 52 per cent decrease in new diagnoses among gay and bisexual men.

“The downward trend over recent years, alongside the uptake of PrEP, treatment as prevention and enhanced national prevention strategies, means gay and bisexual men should be very proud of our collective efforts to drive down HIV,” says the Kirby Institute’s Professor Andrew Grulich.

Among participants of the Gay Community Periodic Survey conducted by UNSW’s Centre for Social Research in Health (CSRH) in 2021, 66 per cent of HIV-negative gay and bisexual men reported having had an HIV test in the 12 months prior to the survey, down from 74 per cent in 2019, prior to the start of the COVID-19 pandemic. These data are included in CSRH’s Annual Report of Trends in Behaviour, also released at the HIV/sexual health conference today.

“We know that in 2021 gay and bisexual men continued to report fewer sex partners than before COVID-19, and that HIV risk appeared to be lower,” says Professor Martin Holt from CSRH.

There were 17 new HIV diagnoses among Aboriginal and Torres Strait Islander peoples in both 2020 and 2021. This represents a 51 per cent decrease over the past two years, however the numbers are very small, making it difficult to determine whether this is a trend.

Mr Robert Monaghan, head of Aboriginal and Torres Strait Islander Health research at the Kirby Institute says, “Although the numbers are small in Aboriginal communities, Aboriginal people face additional barriers to accessing prevention and care. Tailored campaigns for the community are needed, focused on testing, treatment and PrEP.”

Download the UNSW Centre for Social Research in Health’s Annual Report of Trends in Behaviour 2022.