Scientia Professor Martin Green is the first Australian to win the prestigious Millennium Technology Prize for transforming the production of solar energy. 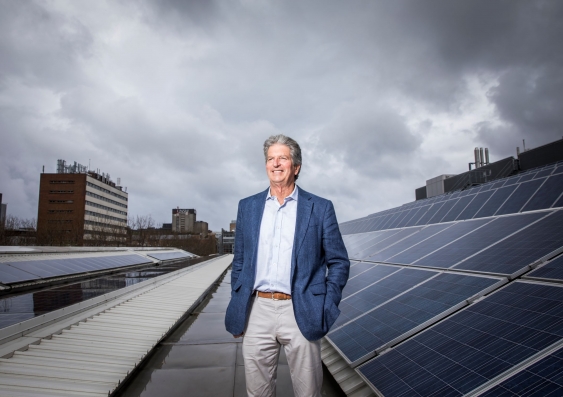 Scientia Professor Martin Green has been awarded the 2022 Millennium Technology Prize for his leadership in the development of the Passivated Emitter and Rear Cell (PERC) – the world’s most commercially viable and efficient silicon solar cell technology.

Presented by Technology Academy Finland, the biennial prize highlights the impact of science and innovation on society and is worth 1 million euros. Prize patron and President of Finland Sauli Niinistö conferred the prize upon Prof. Green at a ceremony in Helsinki.

Prof. Green said he was honoured to receive the prestigious prize. “The Millennium Prize not only recognises my contribution to photovoltaics [the conversion of light into electrical power], but also the achievements of my students and research colleagues at UNSW, as well as those of the broader photovoltaic (PV) research and commercial community.

“I believe the Prize will increase my credibility as a spokesperson for what needs to be done to address climate change. We need to switch from fossil fuels to renewable energy to sustain the trajectory of human civilisation on our shared planet. The pace of change is accelerating and the world will shift to solar and wind energy over the coming decade. I believe a huge transformation of historic significance is underway.”

The 2022 Prize drew 40 nominations from the fields of life sciences, energy and the environment, ICT and smart systems, and new materials, processes and manufacturing. A record number of women were nominated this year. It is regarded as one of the world’s top academic awards rated by the IREG List of International Academic Awards and has a reputation score of 0.5 compared to a Nobel Prize.

Prof. Green is often described as “the father of modern photovoltaics” and was recently referred to by Australia’s federal Minister for Climate Change and Energy, Chris Bowen, as a “national treasure”.

Read more: Solar panels aren't perfect yet – we can make them even better and cheaper

He led the teams at UNSW that developed the PERC technology, improving the quality of both the top and the rear surface of standard silicon solar cells. When sunlight – in the form of particles called photons – enters a cell, it excites the electrons within the silicon. In this excited state, electrons can move through the cell, creating electric current. The improved surface of the PERC cell allows the electrons to maintain this excited state – or move freely – for longer, resulting in greater and more efficient energy generation. The PERC cell technology has helped increase the conversion efficiency of standard solar cells by over 50% in relative terms from 16.5% in the early 1980s to 25% in the early 2000s.

As a result of Prof. Green’s innovations and advances in PV technology, solar energy is considered instrumental in the global transition to renewable energy and decarbonisation. Last year, PERC cells accounted for over 91% of the worldwide production of silicon solar modules.

“On behalf of the entire UNSW community, I extend my warmest congratulations to Martin for this tremendous achievement. The drastic reduction in costs of photovoltaic solar systems in recent years is directly related to the scientific efforts of Martin and his team at UNSW. The PERC technology has had – and continues to have – a transformative impact on the global energy sector and has greatly accelerated the global fight against climate change.

“UNSW leads the world in solar technology development, and the Millennium Technology Prize further cements Martin’s position as the world’s foremost pioneer in this space.”

Prof. Green and his team was now working on combined cell technologies to reach 40% solar cell efficiency by exploring options such as stacking cells on top of each other.

“Solar cells are increasingly being used to replace large power stations that use fossil fuels. In 2021, 20 countries or regions including Australia, Chile, Germany, Greece, Italy, Netherlands, Spain, Vietnam and California generated between 8% to 25% of their total electricity supply from solar energy, with this number growing quickly,” Prof. Green said.

“The rapid cost reductions in solar energy that my work has facilitated have come just in time, right at the point when the importance of acting immediately to address climate change has become overwhelmingly obvious.”