Water extraction is key cause of the Darling River drying: study

Researchers find the water flow decline on Australia’s iconic river is due to water management failures rather than climate change. 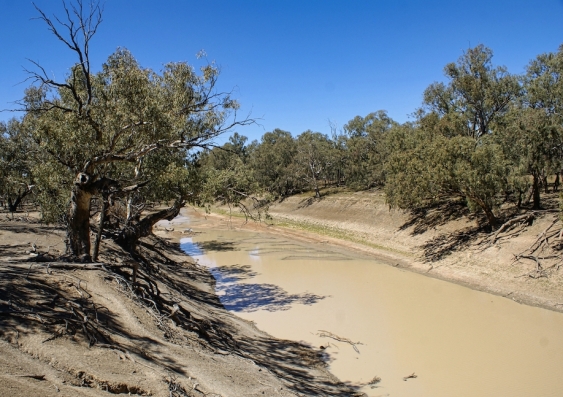 Poor water management and excessive extraction are the primary causes of declining flow and the poor state of Australia's Darling River, a new study has found.

The researchers from The Australian National University (ANU) and UNSW Sydney investigated the effects of both climate change and water resource management on the Darling River over the last 40 years.

The study, published in Philosophical Transactions A of the Royal Society, found the principal cause of river flow decline on the Darling River, known by First Nations peoples as the Barka River, isn’t due to a drying climate, but to ongoing and "large-scale" water management failures.

Co-author Professor Richard Kingsford, Director of the Centre for Ecosystem Science at UNSW Sydney, said the findings show that while climate change is clearly happening, it can't be used as an "excuse" for the negative impacts poor water management is having on the Darling River. But importantly, the poor state of the rivers is due to systemic problems in over-allocation.

"Our point isn’t that climate change is not happening. It’s here, it’s now and is global in its impacts. But the story of fish kills at Menindee Lakes and declines in health of wetlands of international importance, like the Macquarie Marshes, is due to decreasing river flows," Professor Kingsford said.

The researchers investigated the causes of declines in river flows and the impacts on waterbird numbers over the past 40 years on the Darling. Unlike the almost pristine Paroo River, with virtually no water extractions, the Darling River has nine major headwater dams and tributaries with a total storage capacity equal to nine Sydney Harbours (4415 billion litres).

"Our analyses separated the effects of declining flows in the Darling River from long-term meteorological trends from other factors, such as increased water extractions," lead author Professor Quentin Grafton from ANU said.

"We found that more than half the decline in river flows on the Darling River over the past 40 years was due to factors other than higher temperatures or less rainfall.

Read more: It's official: the Murray-Darling Basin Plan hasn't met its promise to our precious rivers. So where to now?

"The Darling has had high rates of water extraction for decades – driven by water allocation and provided by 15 main channel weirs and over 1000 small weirs along its 1000km length, including upstream.

"Our principal finding is that much of the river flow decline on the Darling River has not been because of climate change but almost certainly as a result of increased water extractions,” Professor Grafton said.

"Further evidence supporting this conclusion can be drawn from the large, unmetered and possibly increasing water extractions associated with floodplain harvesting in the order of hundreds of billions of litres per year in the northern Murray Darling Basin, some of which may be illegal."

Professor Kingsford said, climate change shouldn’t be used as a ‘get out of jail card’ or treated as an ‘Act of God’ to excuse bad decision-making and poor planning decisions.

"Much can be done to adapt to both droughts and floods and to reduce both the risks and the consequences to people and the planet from extreme weather events and to protect our biodiversity and the people who rely on rivers.

"We have no excuses for claiming that climate change is primarily or solely responsible for declining flows on the Darling River when it’s not,” Professor Kingsford said.

"We need to reduce water extractions and reallocate water on this iconic river to ensure minimum river flows for downstream communities and critically important environments.

"This task is urgent if we, as a nation, are to achieve what we agreed to with the Murray-Darling Basin Plan a decade ago – healthy sustainable working rivers."